A swaggering fortune hunter “tames” a spitfire heiress in Shakespeare’s troubling courtship/ brawl.  Exceptional Renaissance production design and a Nino Rota score adorn a film meant to capitalize on the fiery romantic chemistry between an experienced Shakespearean and an iconic Hollywood star. “They are refereed by Franco Zeffirelli out of the corner of one winking eye. And if any crusty customer doesn’t like it—well, a pox on him!” (Bosley Crowther New York Times).

The Taylor Burtons were the most glittering, tabloid-ready couple of the 1960s.  After the scandal of Cleopatra (she left her husband for him) they filmed Who’s Afraid of Virginia Wool. The Taming of the Shrew, like the previous one, was treated by the public as if they had a window into their notoriously combative home life. They were called the Battling Burtons, after all. One critic, Kenneth Rothwell, said the newlyweds in Shrew were doomed to grow older and turn into Woolfe’s George and Martha (Rosenthal 239).

“Liz and Dick existed in a twilight zone between post-scandal notoriety and born-again respectability (Brode 21).  Burton was a well-respected stage actor who had played Hamlet on Broadway, and Taylor, one of the most gorgeous jewels of the MGM star-making machinery was ready to tackle the Bard.  They produced the film themselves, ready to exploit the public’s curiosity about them. 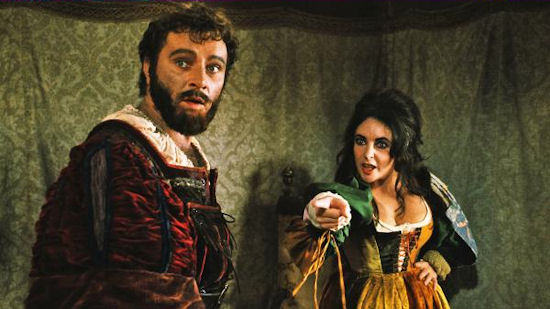 Franco Zefferelli was a stage director making his cinema debut.  He had been studying architecture in Florence, Italy, when his schooling was interrupted by the WW II; he became a member of the Resistance. Afterwards, he was an actor, as well as a costume and set designer; he worked with and lived with director Luchino Visconti.  Zefferelli was used to managing temperamental divas, in the early part of his career he worked with film actress Anna Magnani, and opera star Maria Callas.  His specialty had been opera, which he considered an ideal art form, combining dance, drama, music and the visual arts, much as Bollywood films do—or Shakespeare, himself.  His Shakespeare films, The Taming of the Shrew, Romeo and Juliet, and Hamlet have been career high points, in part because their repeated classroom use.  But the first two, in particular, were also big box office hits, as much about their cultural moment as the Bard.  He’d originally planned to cast Sophia Loren and Marcello Mastrioanni as Kate and Petrucio, but his plans changed when he heard the Burtons were interested.  They had just celebrated their second wedding anniversary.

The Burtons had embarked on an ambitious program of films that would cement their reputations as serious film artists.  Burton, primarily a stage actor, was willing to learn from his wife.  She had “taught me subtleties in film-making I never knew existed…the value of absolute stillness and that my very penetrating voice need not be pitched louder than a telephone conversation.  But, chiefly she taught me to regard the making of a film as exacting and as serious as playing Shakespeare on stage” (Spoto 230).

They financed some of this film themselves, eschewing salaries, but collecting on the back end to the tune of several million dollars.  Zefferelli  filmed Shrew on four immense sound stages outside of Rome for five months, much more concerned with the visual spectacle than the text.   Taylor had hired her favorite costume designer, and personal friend, Irene Sharaff to design her costumes;  Zefferelli wanted lots of décolletage.  The remaining costumes were designed by Danilo Donati.  Zefferelli had the cinematographer pre-expose the color film which gave the film a burnished golden glow.  He wanted to recreate the feeling of an Italian Renaissance painting come to life.

Burton was a serious alcoholic and drank while he was working.  During this film, Taylor began to do the same. The couple squabbled incessantly, Burton insecure about Taylor’s skill before the camera, and Taylor intimidated by Burton’s high-brow reputation.  Burton resented her higher salary and top billing.  Taylor was frustrated by Burton’s drinking, and sensitive to his gibes about her weight.  Still to the public, they made married love look glamorous and exciting.  Stories filled the fan magazines and hastily penned books.

They travelled with a large entourage which Zefferelli believed held too much sway with their employers, always scheming and pitting them against each other.  They lived like royalty in a Roman villa, with ten staff, four children, numerous pets and eight bodyguards.  They socialized with actual royalty, Princess Grace, the Guy de Rothschilds, and the Duke and Duchess of Windsor, old now, their own scandal dusty and forgotten.  Taylor invited hangers-on to lavish meals in a local restaurant, and pounds of caviar and cases of champagne were consumed in their villa.  “I get a lusting, sensual thing about eating” she said, and the visual evidence is clear (Spoto 232). 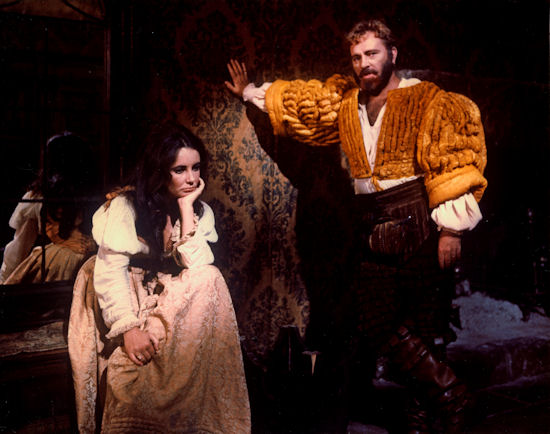 Taylor was worried that experienced Shakespearean actors, not just Burton but Cyril Cusack, Victor Spinetti, Michael Hornden, and in his film debut, Michael York, had the advantage over her.  Zefferelli said, “Elizabeth was very shy to play Shakespeare to begin with…but she brought a marvelous devotion. ..I consider that Elizabeth, with no Shakespearean background, gave the more interesting performance because she invented the part from scratch” (Sam Kashner and Nancy Schoenberger 168).

Filming schedules were challenging.  Burton arrived at 7:30 ready for his first take two hours later.  But Elizabeth didn’t arrive until 11am.  Lunch lasted from 1pm-4pm, and with all the drinking, not much happened after that.  But, since the Burtons had financed the film, they did have some stake in it coming in on time and on budget.  There was no late night partying, as Richard rehearsed with Elizabeth in the evenings.  Elizabeth would remember the five month shoot as “one long honeymoon” (Sam Kashner and Nancy Schoenberger 181).  Her final speech was directed by Burton, as Zefferelli had already departed Rome for an assignment at the Metropolitan Opera.   Taylor’s extravagant life may have belied it, but she believed the words she spoke in her final speech—her life, however, never conformed to them.

Taylor’s performance was not uniformly appreciated. “Her breasts performed beautifully, but her vocal chords proved disappointing” one critic wrote (Brode 23).  It was the first whisperings of second wave feminism, and some felt she read her closing speech with a touch of irony that belied the submission, leaving the lingering thought that perhaps she still has the upper hand.  But, the marketing of the film was unabashedly sexist (the trailer is awful to modern sensibilities).  As Deborah Cartwell points out, it’s not just Taylor’s 60s hairstyle and make-up that date the film but her desire to be tamed.  “She belongs to the era which produced The Honeymooners (which spawned The Flintstones) in which a wife’s virtue is in the way she perseveres with her boorish and self-centered husband” …a piece of male chauvinist wishful thinking (Jackson 218). 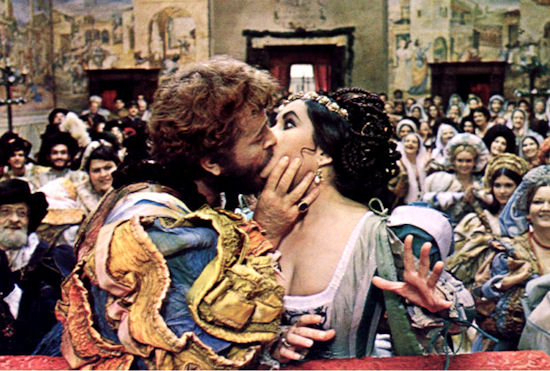 If you know any version of The Taming of the Shrew, it’s likely to be either Kiss Me, Kate, the MGM musical, or Ten Things I Hate About You with Heath Ledger and Julia Stiles.  Kiss me Kate has the Shakespeare play mirror the off stage feud of a tempestuous theatrical couple (based on a real life tempestuous theatrical couple).  Ten Things is a teen movie, Shakespearen weak tea (by way of Disney/Touchstone)  in spite of a few quotes played for laughs, its conflict muted by Ledger’s dreamboat bona fides.

70% of Shakespeare’s words vanished in this adaptation.  The critics were not kind, The Guardian critic said that his “dearest wish that everyone would stand still and shut up” (Rosenthal 239). Some critics roasted Zefferelli, tagging him “the dangerous title of popularizer in chief” due not just to his rewriting to the exclusion of Shakespeare’s text (to which every adaptor, on stage and screen could be accused) but to his emphasis on extravagant visual style (Babiak 99). 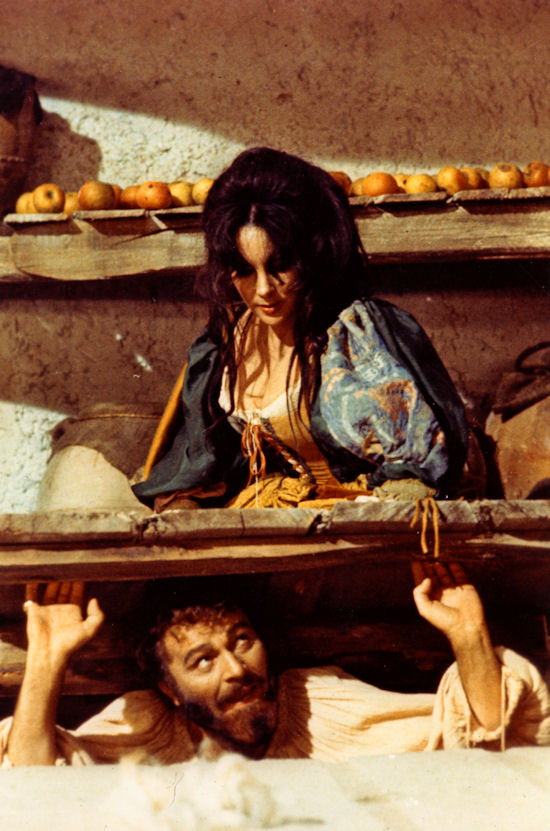