America’s #1 hero, according to the latest American Film Institute poll, is gentle, principled Atticus Finch, a widowed attorney defending an innocent black man against a rape charge in a small Alabama town. “There have been few films to capture so accurately the way children see the world around them as a place of terror and magic.” (Peter Thompson). Author Harper Lee stated, “In that film, the man and the part met.”

To Kill a Mockingbird, Lee’s fictionalized remembrance of her Depression era childhood in Monroeville, Alabama, won the Pulitzer Prize in 1960. The novel spent a year and a half on the best seller lists, and sold over 3 million hardcover copies. Her only novel remains a beloved component of high school reading lists (and some law school syllabi) one of the few classics still meaningful for today’s younger readers.

Then, as now, movie studios were uninterested in a book with no romance, no action and very little plot, a meandering look at a year or so in a sleepy Southern burg. Director Richard Mulligan and producer Alan Pakula saw something rare and valuable in the story, and so did Gregory Peck, who read the book overnight and called at 8 am the following morning to agree to play Atticus Finch. The screenplay was written by another Southerner, playwright Horton Foote, trusted by Lee to turn her novel into a film. The adaptation is a close one, melding cinematic atmosphere and the book’s beautifully elegiac prose.

Eldred Gregory Peck (his mother found his first name in a phone book) grew up after his parents’divorce in the care of his maternal grandmother in rural La Jolla, California. He was drawn to the novel in part because he identified with Scout and Jem’s childhood, free of adult supervision, running barefoot and rolling in tires. He also remembered a cross-burning that the Klan directed towards a neighboring African-American family. “I felt I could climb into Atticus’ shoes without any play-acting. That I could be him.”

Majoring in medicine at UC Berkeley, he discovered acting only when asked to try out for a part in his senior year because he was tall (6’3”) but being on stage struck a chord in him that more conventional studies did not. He went to NYC to try the actor’s life with little success at first, and occasionally had to sleep in Central Park. Winning a scholarship to the Neighborhood Playhouse, his acting career began in earnest. Classified 4-F because of a bad back (Martha Graham pressed her knee into his back during a class in an attempt to improve his flexibility and ruptured a disc) he quickly found a niche in Hollywood where many leading men were in the service. He was nominated 4 times for an Oscar in the 1940s without winning. Throughout his life he devoted much of his time to the arts and liberal political causes, even making Nixon’s enemies list.

Harper Lee modeled the character of Atticus Finch on her father, Amasa Lee, an attorney whose 1923 defense of a black client inspired the novel’s trial. Peck went to Monroeville to meet Mr. Lee, 82 years old at the time. Amasa died during the filming, but Harper Lee sent Peck her father’s watch and chain before the Oscars, and Peck was holding them when he won his only Academy Award for Best Actor. Obviously Peck’s performance meant a great deal to her. “I can only say that I am a happy author. They have made my story into a beautiful and moving motion picture. I am very proud and very grateful.” Speaking after his death in June, Lee said, “Gregory Peck was a beautiful man. Atticus Finch gave him the opportunity to play himself.”

Monroeville had changed too much since the 1930s for the film to be made there, so the town was reproduced on 15 acres of the Universal back lot. There were several existing turn-of-the-century homes slated for demolition due to freeway construction, one of which became the Finch homeplace. 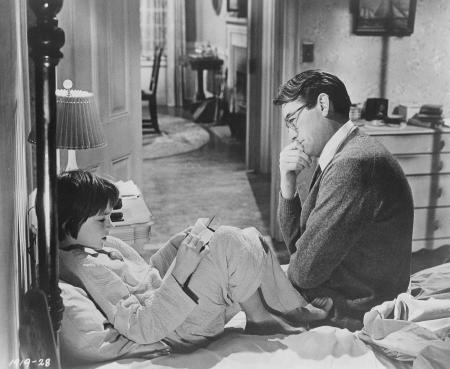 Mary Badham and Gregory Peck on the set

The charm and naturalness of the children playing Scout and Jem contribute immeasurably to the film’s success. Both Mary Badham and Phillip Alford were discovered by a local theater director in Birmingham, Alabama, who sent them to the open audition. They lived 4 blocks from each other, although they had never met. Their prior experience had been in school plays and other amateur productions. John Medford, who played Dill, was a professional actor from New York. (He plays a character based on a summertime neighbor of the Lees, who also became a writer, Truman Capote). Mulligan was looking for kids who were bright and alive, with active imaginations. His technique was to let the kids be kids, allowing them to play and keeping the camera at a distance until he was ready to shoot. The children enjoyed the experience of filming, and Mary Badham’s affection for Peck was real. After only a few days on the set, she would climb into his lap in between shots. He was “every little girl’s dream of a father, kind, considerate, patient a total delight to work with” and said in another interview, “It was all just so easy.” She enjoyed the experience so much that during the last scene that was filmed, outside the jail the night before the trial, she kept blowing her lines, knowing the experience was about to end. Finally, her mother scolded, “Look, enough is enough. Let’s get this done and get it over with. You’re a professional now.” Mary was nominated for an Oscar, but lost to Patty Duke (in The Miracle Worker) who instead became the first child actor to win an Oscar in a competitive category. 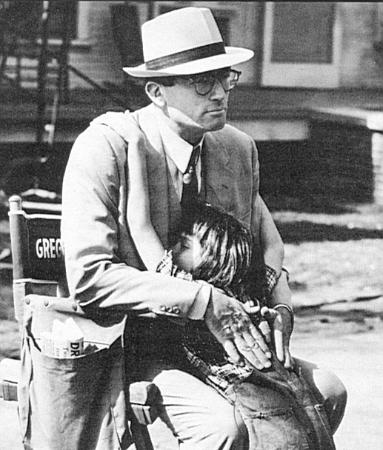 Mary Badham and Gregory Peck off the set

The courtroom scenes took place in a reproduction of the Monroeville courthouse. Peck had to avert his gaze from Brock Peters as he told his story during the trial, since Peters’ real tears exerted an emotional pull that made it difficult for Peck to retain his composure…in fact they are not in the same shot during that scene. The 9-minute summation speech flowed in just one take. “I just put everything I had into it—all my feelings and everything I’d learned in 46 years of living, about family life and fathers and children. And my feelings about racial justice and equality and opportunity.”

Although the film looks back on the Jim Crow past, the film was made during a tense era in the Civil Rights struggle. The filmmakers intended the film affect social change and, in fact, it did so. Brock Peters often played a villain in the 1960s, when African American heroes tended to resemble the more conventionally handsome Sidney Poitier. Casting Peters was in itself a subversive act. 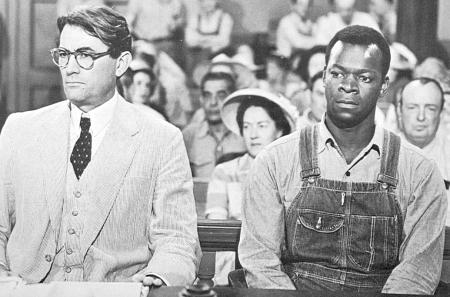 To Kill a Mockingbird was overwhelmed in the Oscars by Lawrence of Arabia, indeed, many at the time felt that Peter O’Toole should have won the Best Actor prize. Mockingbird was Peck’s favorite of his own films, and he stayed close throughout his life to Lee, Badham, Alford and Peters. Shortly before his death, the AFI named Atticus the greatest movie hero. “The choice felt both surprising and inevitable. Under Gregory Peck’s quiet care, decency itself was heroic.” (Harris and Sauter) Peck often said, “The lead in my obituary is sure to be ‘Academy Award Winner for To Kill a Mockingbird.’ I’ll settle for that.”

For a great study guide to the film, visit www.med.sc.edu/medialit/tkam/

(Production still of Badham and Peck from Jerry Ohlinger’s Movie Materials Store, candid shot from “Gregory Peck” in March, 1967 Films in Review, Peck and Peters from March 1963 review of the film in Films in Review. Sources include: Gregory Peck by Gary Fishgall, Films of Gregory Peck by John Griggs, Gregory Peck, a bio-bibliography by Gerald Molyneux, Making of To Kill a Mockingbird, documentary extra on video, 60 Years of Oscar by Robert Osborne, Toms, Coons, Mulattoes, Mammies and Bucks by Donald Bogle, A Conversation with Gregory Peck directed by Cecelia Peck and Barbara Kopple, Obituaries in the LA Times (Myrna Oliver and Robert W. Welkos) NY Times (William Grimes) and Entertainment Weekly (Mark Harris and Michael Sauter).