An elderly couple travel arduously to the city to visit their grown children, whose busy lives exclude their aging parents. This sublime film, made late in the director’s career is filled with melancholy and affirmation, “the supreme masterpiece of one of the cinema’s greatest masters.”—London Guardian.

Yasujiro Ozu averaged about a film a year from 1927-1962. Forty nine of his 54 films take place in Tokyo, a locus of clashing modern and traditional values. Few of his films were distributed internationally, since they were bereft of historical, adventurous, picturesque and exotic features found in most Japanese art-house exports. But, he was his studio’s most famous and profitable director. Tokyo Story finally received international distribution in 1972, about a decade after his death, and began to garner great praise. On the prestigious Sight and Sound Critics Poll (2002) from the British Film Institute, Tokyo Story is #5 in the Top Ten.

Ozu modestly believed his films were too provincial to interest a global film audience. He was conservative by nature, and likened his life’s work to that of a conscientious tofu shop proprietor, who varied his wares only within strict limits. He was the second child of five sons, and although he was born in an old district of Tokyo, he spent his childhood outside the city. He went to a boarding high school, but often went to the movies instead of school, and never attended university. A family friend’s recommendation got him a place as an assistant camera man at a film studio when he was 20, four years later he directed his first film. By some accounts a pampered mama’s boy, he never married and lived with his mother until her death in 1962, he survived her by only a year.

He started his career making genre films, emulating the American silent movies he loved. One early film was an imitation of a Harold Lloyd comedy. Thirty of his fifty four films are silent. The silent era lasted well into the 1930s in Japan, because of the Japanese love of the benshi, the on-stage narrator who commented on what occurred on screen. He resisted change, making silent films until 1936, and did not use color until 1958. Eventually, he ceased copying foreign films and began to focus on his true subject, shomin-geki, or lower middle class life. His films observed people raising kids, going to work, marrying, marital conflict and the aged. He was interested in how societal forces can never control the intimate experiences that shape a person’s life

Ozu’s films used a static, undemonstrative camera, often placed about three feet from the floor, as if the camera was kneeling on a tatami mat. Rather than calling attention to camera movement, he concentrated on cross cutting between faces, often looking into the camera, suffused with complicated emotions. (Bordwell). A recurring phrase is that he is the “most Japanese of Japanese directors” a reference to his interest in the seemingly uneventful lives of ordinary people. “No one knew the power of the everyday like Ozu, and no one presented it with less ornamentation.” (Linda Ehrich, in Desser).

The look of Ozu’s films is consistent because he used the same cast and crew virtually his entire career. His cowriter and close friend, Noda Kogo, was an invaluable collaborator. He only worked with two cameramen; when one retired, he was forced to hire a replacement. Scripts began with the invention of dialogue, characters and settings were determined later. A phrase was often an inspiration. Tokyo Story took 103 days to write, and 43 bottles of sake shared with Noda Kogo. “Pictures with obvious plots bore me. Naturally, a film must have some kind of structure, or else it is not a film, but I feel a picture is no good if it has too much drama.” (Richie). He often described Tokyo Story as being his most melodramatic film, “Plot used people—to use them is to misuse them.”

Strangely, Tokyo Story is modeled on a favorite Hollywood film of Kogo’s, a tear jerking 1937 melodrama by Leo McCarey, Make Way for Tomorrow, which Ozu never saw. This no doubt accounts for the melodrama the director tried to avoid. “When laughs and tears are as inflated as they are in most films of today, trained monkeys would be perfectly adequate as actors. Actual moments of joy and sorrow are times when we keep our emotions most to ourselves. I minimize the acting in my films because life is like this.” (Richie). Make Way for Tomorrow also told the story of a devoted elderly couple and their ungrateful children, the American film set during the economic duress of the Depression, and Ozu’s film during the Post WW II reconstruction in Tokyo. In both cases, a quest for individual fulfillment splinters the traditional family structure. This same source material is revisited in a recent Bollywood film, Bagbhan, at a time when consumerist culture intrudes more and more on Indian traditional values.

Tokyo Story’s sound landscape is dominated both by the sounds of modernity, boats and trains, and cicadas, a sound of nature. Its unique setting, coupled with the universality of theme shows kinship with films of the Italian neorealists, the French New Wave, and other cinemas that rejected the story driven Hollywood cinema. In Ozu’s films significant events occur off screen, and he also does not conform to Western ideas of continuity, shots may appear mismatched by Hollywood standards. He was a perfectionist who had the film exactly the way he wanted it on paper, and would shoot until the cast confirmed to his preconceived expectations. Chishu Ryu, the father in Tokyo Story said in Sight and Sound magazine: “Mr. Ozu looked happiest when he was engaged in writing a scenario with Mr. Kogo Noda, at the latter’s cottage…By the time he had finished writing a script…he had already made up every image in every shot, so that he never changed the scenario after we went on the set. The words were so polished that he would not allow us a single mistake.” (Desser).

While a story about travel in Western countries indicates the optimism of new horizons, in Japan, it denotes separation from community. The parents in Tokyo Story seek affirmation for their life’s work in the faces of their grown family. The modern city is not a place of promise, but only one where one becomes nostalgic for one’s home place and faces life’s disappointments.

Ozu’s admirers have tried to illuminate his work by comparing it to Buddhism, Japanese ceramics and painting, travellers’ journals and haiku poetry. Donald Richie, perhaps the most prolific chronicler of Japanese film, emphasizes the “suji” or flow of the film. Another critic points out that Ozu treasured a monk’s painting of the symbol “mu” or void, that space between objects that is filled with possibilities. In fact, “mu” was the symbolic memorial he wished on his gravestone. Ozu, who had a keen sense of humor said wryly of all those seeking to explicate his films, “Whenever Westerners don’t understand something, they simply think it’s Zen.”

“Ozu is a vital lesson to American film, and provocation to us to be wise, calm and more demanding in what we want of our films.” (Thomson). 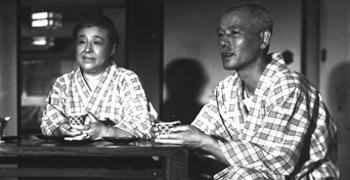 For more on the benshi tradition: El Automovil Gris.