A weary criminal, Max the Liar, contemplates stylish retirement after one last heist. Jacques Becker is perhaps the most neglected of the great French directors. Don’t Touch the Loot is less about gangsters than aging and friendship, embodied by the elegant ennui of ex-matinée idol Jean Gabin.

Grisbi was based loosely on one of a series of novels by Albert Simonin, part of the hugely popular Serie Noire collection, and quickly sold out its initial printing. Becker was immediately interested, not in the plot, but in the friendship between the two leading characters, hinted at, but not detailed in the book. Simonin worked with Becker to adapt his novel to the screen. Becker wanted the film to be less concerned with the detection of crime, as in a film policier, and more with the gangsters alone, considered to give it a unique “Frenchness.” Becker said in an interview, “I am French; I make films about French people; I look at French people; I am interested in French people.” The underworld argot here is rendered in a tasty new translation by Lenny Borger; the original dialogue was considered unsuitable for American audiences of the 1950s. In fact, the slang was impenetrable even to French audiences, and the publisher of the book included a slang glossary, which resulted in some of the colorful vocabulary being incorporated into idiomatic French.”From Simonin, cinemagoers learned to refer to a car as une tire, a million francs as une brique, a gun as un flingue, the cinema as le cinoche, and to say, on me fait du suif when someone was causing them trouble” (Buss).

Jacques Becker was born in Paris in 1906, the son of a well-to-do battery manufacturer and his Scottish wife. He loved cinema from an early age. While working on a transatlantic ocean liner at the age of 19, he met Hollywood director King Vidor. Vidor’s generous offer to get him a job on his silent film masterpiece, The Crowd, came to nothing, however. Becker began assisting film director Jean Renoir in 1932. They met because both of their families were close to the family of artist Paul Cezanne (Renoir was the son of Impressionist painter Auguste Renoir). Renoir wrote of him, “When Jacques first came to see me, he was a youngster and the perfect embodiment of everything that I most dislike—a member of the French upper-class, well acquainted with bars and nightclubs and given to the pursuit of elegant sports. But when I got past the veneer, I found my self confronted with someone who was both loveable and ardent. His enthusiasm for the films which I also liked, notably Stroheim’s Greed, and above all his approach to his fellow men definitely rid me of the idea that he was a snob. He loved mankind not in any generalized, theoretical way, but directly and in terms of the individual. He had no prejudices in his choice of friends, being as capable of sturdy attachment to a plumber as to a well-known writer” (Renoir).

In the eight years they collaborated, Becker helped Renoir realize some of film history’s great masterpieces, including La Grande Illusion (in which he had a bit part as a British POW) and Le Regéle du Jeu. But, his intention was always to be a director, himself. The Occupation, and its dispersal of many European artists to America, gave him his chance. Captured during the war, he faked an epileptic fit in order to be released from a German prisoner of war camp, and back in Paris made his first film, Dernier Atout, which aspired to be a Hollywood-style gangster film. His only film to attain international acclaim was Casque d’Or (The Golden Helmet) a crime film set amongst Belle Epoque rascals and their women, and centered on a sensuous performance by Simone Signoret.

In all his films, he was much more interested in a leisurely examination of his characters than in the mechanics of plot. He felt this was the only way he could approach filmmaking. Critic André Bazin said he “goes further, claiming that only through the exactitude of social particularity could the universality of his characters and their situations come to life” (Andrew). François Truffaut admires him in part because, “He will skimp what another director would treat most seriously in order to linger over the characters eating breakfast, buttering a roll, brushing their teeth.” Becker directed only 13 films and died in 1960 at the age of 54. But his influence, especially on the generation of the New Wave directors was strong, and many subsequent French crime films were heavily influenced by him, particularly Jules Dassin’s Rififi (which was a Serie Noire novel a year after Grisbi) and Jean-Pierre Melville’s Bob le Flambeur.

Jean Gabin was one of France’s greatest movie stars, with a career lasting over 40 years. Show business was in his blood as the son of cabaret entertainers, and he rose from a dancer in the Folies Bergère to leading man. His first film was in 1930, and during the next couple of decades he was France’s most magnetic movie star, fusing a potent blend of working class glamour and doomed romanticism in classic films like Pepè le Moko, Quai des Brumes, Le Jour se Lève and Renoir’s La Grande Illusion and cementing his position in international cinema. Like many European artists, the Nazi menace caused his exile from France. He spent WWII in Hollywood, in part because of his personal relationship with Marlene Dietrich, and returned to French films in the 1950s and “evolved a new image as the experienced, assured male, firmly in control of his destiny and no longer vulnerable to female charms” (Cousins). He won a Best Actor award at the Venice Film Festival for this role as Max the Liar.

Josey, a chorus girl, is played by a very young Jeanne Moreau, well before her international success in Truffaut’s Jules and Jim. She made both stage and screen debuts in 1948, but remained a bit player in films while concentrating on stage work. She’s 26 in Grisbi.

Marinette, the club manager’s wife is played by Gaby Basset, who was Jean Gabin’s first wife (1925-1933) and Betty, the rich American is by Marilyn Bufferd, Miss America of 1946.

The harmonica theme became quite famous on its own. Given lyrics and retitled “The Touch” it preceded the film to America by five years. Composer Jean Wiener had written a score that he considered far superior to the little melody he had written in five minutes and whimsically decided should be played on harmonica. Becker loved the theme, “What luck, you’re going to be rich!” he enthused. Wiener was infuriated when Becker threw “into the garbage” his more serious work, focusing on the harmonica tune. But he eventually came to be grateful, “Thanks to his stubbornness, I was going to make the only big commercial killing of my career, thanks most of all to Grisbi, I was going to have the great, inexpressible pleasure of hearing it sung and whistled by everyone, in the street, in cafes, by slot machines, by the painter painting the shutters across the street, by the little telegraph boy who’s just leaned his bicycle against my door, the world had my melody in their heads and in their hearts” (Weiner).

The most unforgettable scene is a seemingly mundane one, as Max and his old friend Riton have a glass of wine and some paté, don their crisp striped pajamas and brush their teeth. “the best eating scene ever” in the opinion of director Jules Dassin, director of another great French crime film, Riffi. Their friendship referenced conditions in France, occupied by the Germans less than ten years before, in which fidelity to one’s comrades in arms, and in the Resistance, took precedence over other loyalties

“’What I find interesting are personalities,’ Becker said… This theme came through clearly in Simenon’s book, but very few screenwriters would have known how to bring it out, pushing the violent and picturesque action to the background. Simenon is forty-nine and Becker is forty-eight; Grisbi is a film about being fifty” (Truffaut).

“The American gangster, feral and insecure, has traditionally been presented on screen as a force of nature. The supremely self-confident hero of Touchez pas au Grisbi is something different: he’s a force of culture” (Rafferty). 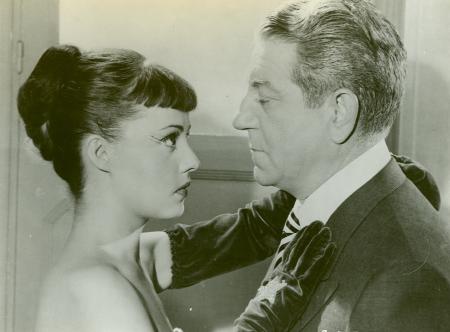 Jeanne Moreau and Jean Gabin in a posed shot that doesn’t appear in the film.