A gentleman thief and a lady pickpocket join forces to fleece a perfume heiress in this elegant confection, a prime exemplar of “The Lubitsch Touch.” A connoisseur of soigné allure and witty banter, many consider this the sophisticated director’s best film “Never equaled, Trouble in Paradise twinkles like the polestar in the sky” (Village Voice).

Trouble in Paradise was based on the memoirs of a reknowned Hungarian con man, Georges Manolescu.  There were two silent films based on his 1907 Memoirs. As director Ernst Lubitsch often did when crafting his films, he used an obscure Hungarian play, The Honest Finder, as his framework, and then changed nearly everything.   The film fits firmly into the “gentleman crook” genre, which began with Raffles, the Amateur Cracksman by E. W. Hornung, published in 1902, in which, rather than a Robin Hood like justification, the thief steals gleefully to feather his own nest, and is not punished.  There had been a number of such films in the 20s (John Barrymore and Ronald Colman both played Raffles).  Unlike the gangster film, which is a tale of social mobility through crime, the gentleman thief appears to represent a prosperous and orderly society, but his legitimacy is entirely a ruse.  As Raffles said, “Of course it’s very wrong, but we can’t all be moralists, and the distribution of wealth is very wrong to begin with” (Paul 51-52). He can manipulate everyone because he knows the rules of polite society and can bend them to his needs.  This particular paradise is one of wealth and frivolous luxury in midst of a world-wide Depression.  Lubitsch never lets you forget that all property is theft. 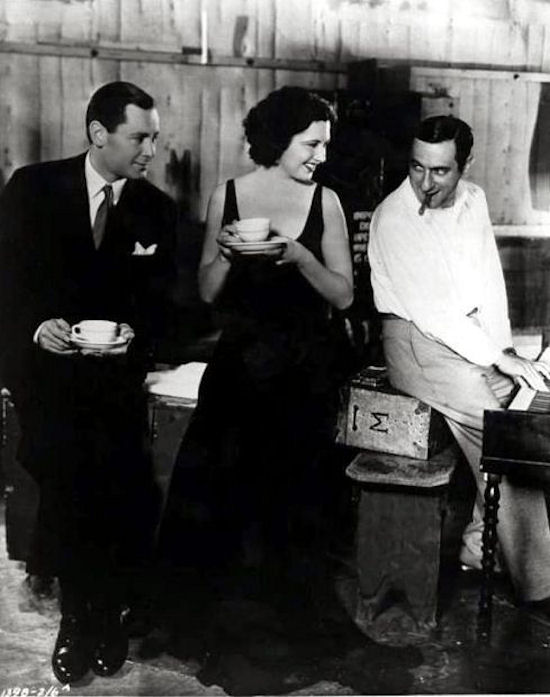 Marshall and Francis with director Lubtisch

All Paramount’s suggestions for available contract players were ignored, so Lubitsch could cast the actors he preferred.  Lubitsch and Samson Rafaelson wrote some of the film’s roles for specific actors, like Edward Everett Horton and Charles Ruggles. Although Gaston Montescu was not written for Herbert Marshall, Lubitsch might have been inspired by the actor’s personal life, while married, the actor had affairs with both Kay Francis and Miriam Hopkins.

Herbert Marshall plays Gaston.  He is not an actor much idolized today, but in the 1920s played suave leading men on stage in both London and New York.  He made his stage debut in 1911, but lost a leg in World War I, which did not impede his post war career as a matinee idol (although it does mean he was doubled running up the stairs).  At first, was primarily a theater actor, even though he starred in several early British talkies, until he arrived at Paramount in 1932, where he perfected his persona as a more mature romantic lead. Norma Shearer described his appeal, “I thought I had never seen a lady so thoroughly and convincingly loved.  He is both manly and wistful.  He wins the sympathy of women because his face expresses tenderness and silent suffering” (Kear and Rossman 85). 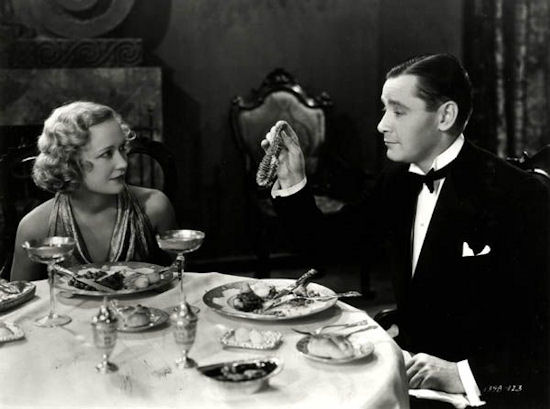 Miriam Hopkins was born in Georgia.  She began as a chorus girl and by the late 1920s was an important Broadway actress.  She signed with Paramount in 1930, and became a big star, this film was an important boost to her career.  The characters she played were often on the bitchy side, and publicity indicated this was true in real life as well, her feuds were fan magazine fodder during her heyday, especially with Bette Davis. Hopkins and Francis were also rivals.  In one scene, Hopkins attempted to upstage her co-star by slowly turning her chair to face the camera.  When Francis complained, Lubitsch has Hopkins’ chair nailed to the floor. 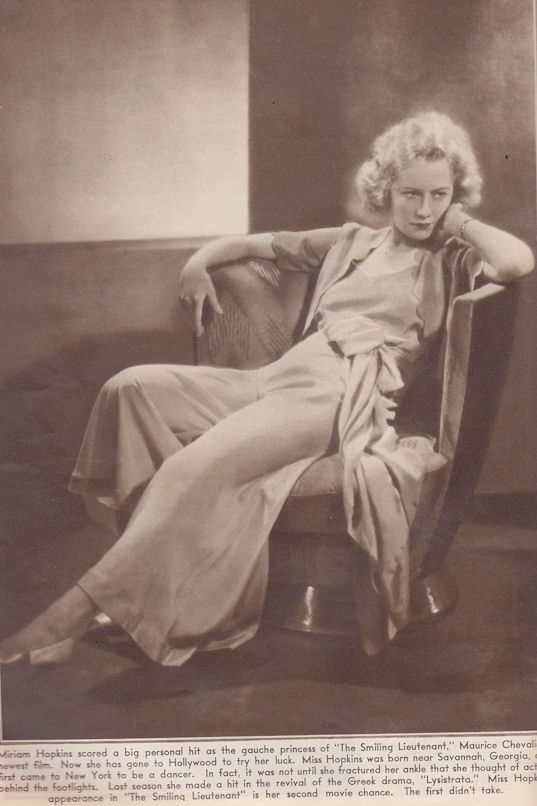 Miriam Hopkins’ “enthusiasm for Mr. Lubitsch (after The Smiling Lieutenant) is quite genuine…I think Southern girls are better trained in small thalk than are gilrs from other sections. They know how to chatter aimlessly, to keep a gathering amused. It all goes back to the ‘old Southern custom’ of striving for popularity with men…Nowadays, we live at such a hectic pace, even in the South, that girls don’t have time to ‘cultivate the graces.’ And no one would be interested in them if they did. But we HAVE kept up the art of conversation. And if you don’t believe it’s effective, just watch what happens at any party where a few Southern girls are mixed with a group of other girls. See who;s surrounded by the most men!” –from the September, 1931, New Movie Magazine. 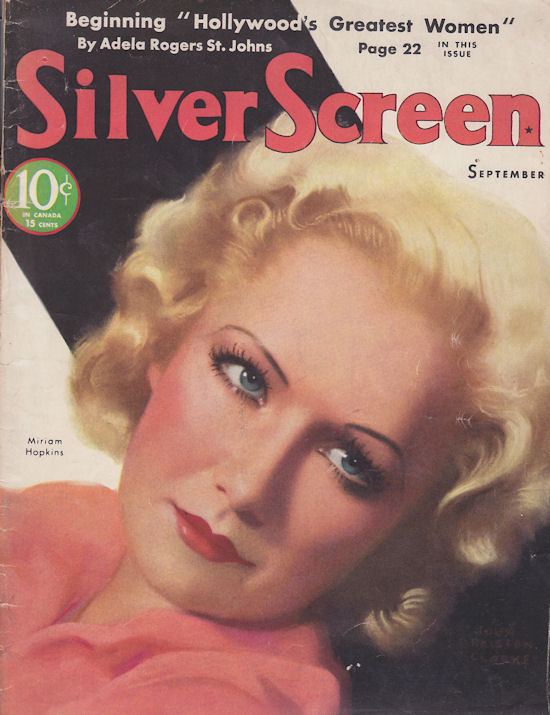 Kay Francis had a hard scrabble childhood in Oklahoma City.  After being deserted by her father, she and her mother, an actress named Katherine Clinton, toured up and down the east coast. She arrived in Hollywood at the dawn of the talkies, already married and divorced twice, and in spite of a speech impediment (she couldn’t pronounce the letter “r”) she became one of the 1930s most dazzling stars.  As Janine Basinger says, “She was born for the bias cut…Francis can wear anything.  She always looks relaxed no matter what has been draped on her body of stuck on her head.  Clothes seem to drip off her shoulders and flow down her body.  She is never undone by an outfit or an accessory. She can pick up a fur muff the size of a grizzly bear and make it look like a cloud that has momentarily drifted by” (Basinger 153). Her private life was not happy, she had always been a heavy drinker, starting the day with a tumbler of gin, and she told Photoplay Magazine in 1939, “I can’t wait to be forgotten” and, if it hadn’t been for Turner Classic Movies and the popularity of Pre-Code film festivals, she might well have gotten her wish.   But, “when one thinks of fashion and glamour, Kay Francis should be the standard by which everything else is measured” (Basinger 159). 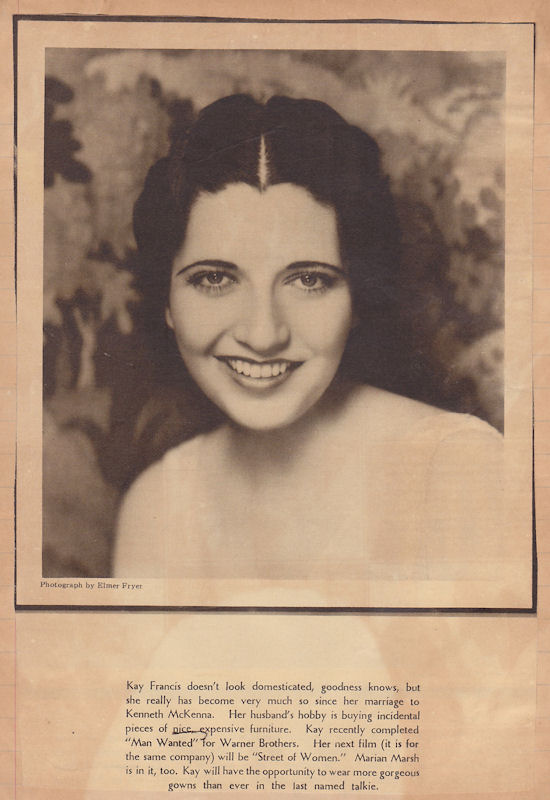 Both writing and shooting the first scene took a meticulous three days, as the film had to have a perfect introduction. Lubitsch looked on this film as almost a musical and used all kinds of optical tricks, dissolves, wipes, and so on to keep the films dual plots spinning swiftly.  Luckily, he was still far away from the enforcement of the Production Code, which would have frowned most vigorously on unpunished crime and sexual swapping.

The film cost $519, 706, and lost money in its US release, although it was popular in Europe.  It was not titled Trouble in Paradise until a month after filming was completed.  It was almost called The Golden Widow, Thieves and Lovers and A Very Private Scandal.  The reviewer for the Production Code said it was “the most sparkling and entertaining of Lubitsch’s comedies since the advent of talkies. For adults.” Because of the emphasis on unpunished crime, the revelation that there is garbage in Venice, Italy, the line “to hell with it” and the sight of C. Aubrey Smith mouthing “son of a bitc,h” this film could not be shown in the US until the fall of the Production Code in the 1960s. Since it was objectionable in whole, it was spared the scissoring that other films, which could be edited for exhibition after the enforcement of the Code, suffered. 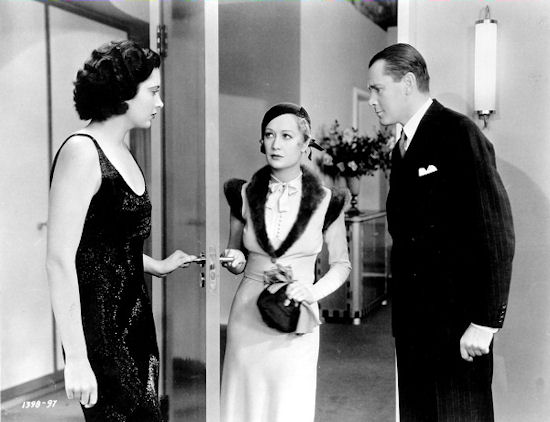 Character actor Edward Everett Horton enjoyed the fact that Lubitsch would rehearse for a week before the cameras turned.  “No matter what you thought or wanted to do, Mr. Lubitsch had gone over it in his mind and had come to a conclusion.  Just as soon as you could put yourself en rapport with him, you were very happy. He knew…actors very well, and he wanted something from them that they didn’t even know they had.  He was a genius, you see” (Eyeman 195-6).

This film is considered to be a high point in Art Deco glamour, thanks to the work of Art Director Hans Drier and Costume Designer Travis Banton.  Drier came to Hollywood in 1924 at the invitation of Lubitsch, after a career designing for Max Reinhardt at the Deutches Theater and at the UFA Studios in Berlin.  His first film was called Forbidden Paradise, and by 1932 was the head of the Paramount Art Department, a job he held until 1950. Lubitsch felt strongly that sets should almost be like characters in the film, and the mansion here certainly fits that definition.

Paramount’s films looked the way they did because of the taste and guidance of Drier.  Drier’s designs for Trouble in Paradise include Bauhaus elements, in fact, he used some of his personal Bauhaus furniture dressing the sets. He enjoyed collaborating (and didn’t hesitate to share credit).  He visited architecture and design colleges looking for young designers. Said one of his colleagues, Boris Levin, “Hans Drier was a very military figure, a disciplinarian.  But at the same time, he believed in freedom; he wanted you to develop in your own way.  Of all the art directors I have known in this town, Hans was the greatest teacher.  I learned everything I know from Hans” (Mandelbaum and Myers 35). 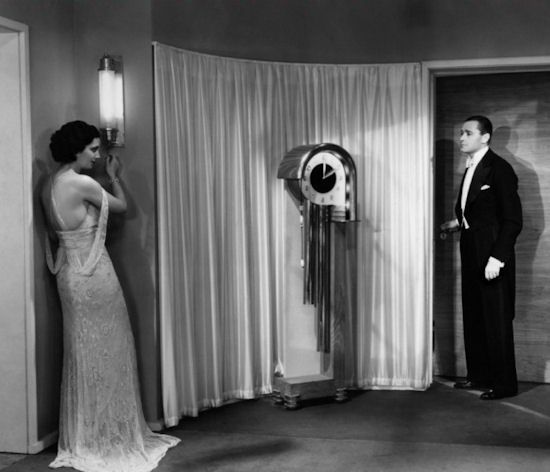 Travis Banton designed the delectable gowns for this film.  Banton first arrived at Paramount in 1924 from the Madame Frances salon in New York City. He had studied at the Art Students League, and also worked for the prominent couturier, Lucile.  At Madame Frances; one of his bridal designs was chosen by Mary Pickford for her secret wedding to Douglas Fairbanks.  He was born in Waco, TX, but when hired by Paramount to design, “The Dressmaker From Paris” he was promoted as a famous French designer, and paid $150 a week; the usual salary at the time was $20.  He worked with the studio’s lead designer, Howard Greer, who soon left to open his own couture house.

Banton told Modern Screen Magazine in 1932, “ Kay Francis to me has a slightly barbaric look that is intriguing.  With her clear dark skin, gray eyes, and almost black hair she can carry off the lavish effect of fold and silver lamés, paillettes and vivid colors.  White satin is exquisite on her.  So are greens that have a yellow cast, also sumptuous furs and exotic jewellery” (Bailey 39). 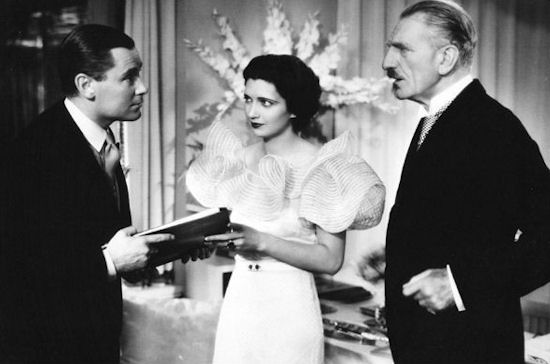 “Adrienne Ames wears yellow corded organdie in ‘From Hell to Heaven.’ It’s reminiscent of a recent Kay Francis dress. Do you remember it?” Reminiscent? Pulled from stock for a starlet, I’ll wager. From the April 1933 New Movie Magazine.

In writing about romantic comedy in Hollywood, James Harvey said, “At bottom, it’s an idyll.  And, perhaps most surprising of all in a Lubitsch movie, it even suggests a certain vision of community: that community of cleverness that exists not only between the leading characters in the film, but between the film and its audience” (Harvey 53) which makes us all co- conspirators.

Lubitsch himself said, in 1947 looking back on his career, “I think I have done nothing better, or as good.” (Harvey 47). 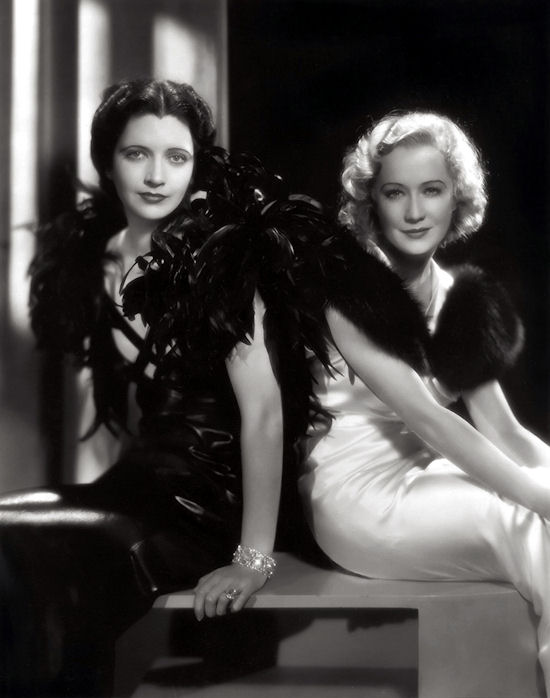