A brooding new music composer (his signature instrument: a kicked bucket) is taken under the wing of an ambitious art gallery owner who adores patronizing the difficult work others disdain. Skewering pretentiousness with satirical work by genuine artists and composers, it’s “a comedy worthy of the best Woody Allen” (Roger Ebert).

I have a studio arts degree, a BFA in drawing. I was at the University of Cincinnati during the minimalist era, when the predominant art style was the kind of work collected with such dedication by Herb and Dorothy Vogel in Herb and Dorothy. But, I can tell you for a fact, the intense and arrogant instructors who made up the majority of the faculty had no sense of humor, even though they were thoroughly ridiculous. Perhaps, that is why I find this film so satisfying.

The mockery is acute not just because of the very funny script by Jonathan Parker and Catherine di Napoli, but because they enlisted actual artists to provide the visual art and music for their film. Pulitzer Prize winning composer David Lang created the music that sullen Adam Goldberg performs. Los Angeles artist Kyle Ng crafted riotous taxidermy pieces evoking the multi-million dollar jokes of art world superstar Damien Hirsch. Perhaps, it’s not necessary to hire an artist to produce “Pushpin Stuck Into a Wall” or other minimalist works supposedly produced by another fictional gallery star in the film. The Iago-like gallery assistant flatters and cajoles spectators unsure of their own preferences into paying vast amounts of money for pieces which give them a sense of their own importance and refined taste.

The film is a comedy, but has serious conversations about art. Should the market place be the most important aesthetic arbiter? Is a challenging work of art more valuable than a pleasing and popular one? Adrian, the scowling composer played by Adam Goldberg, is both jealous and disdainful of the pretty pictures which make a nice living for his painter brother, Josh. One notes that avant garde visual artists have used essentially the same material to epater les bourgoise (shock the middle class) since the Dada days of Andre Breton, Salvador Dali and Marcel Duchamp, and that Adrian’s music is essentially the same anti-melodious work that dates back to the atonal experiments of the mid-20th century. I remember hearing a quote when I was in college, I think it by the poet Grace Paley, to the effect that culture moves on, but the avant garde remains the same, a thought I have had many chances to contemplate over the years.

(Untitled) takes a satirical view of art world pretentiousness, but at the same time celebrates the single minded creators who, sometimes in spite of themselves, inspire us. 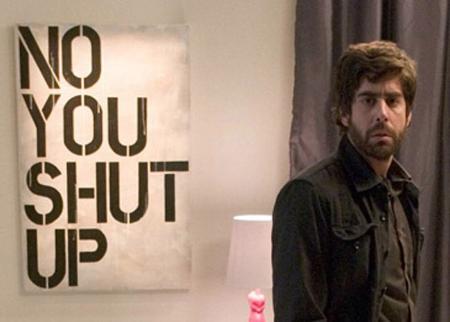