A rip snorting WW II action movie starring Sinatra as a cocky American POW leading his British comrades to commandeer their own prison train and steam it through Nazi occupied Italy to freedom. Shot on Italian locations with a real train and strafing Messerschmitts. “A wild adventure” (NY Times).

Von Ryan’s Express would seem to be a bit of an outlier in this series, as it does not idealize the picturesqueness of Italy.  But, there’s plenty of Italian scenery, and numerous Italian train stations, which, if you have ever been there, is one of your primary tourist points of contact with the country.

There is another reason, too.  My father, drafted after he graduated high school, was in the army of the occupation in Italy, at the end of WW II.  He took photographs (there are a couple reproduced here) as he went from Nice, France, to Naples, San Remo, Firenze and Parma, following the retreating Axis troops. He never spoke of his war experience, he said it was quite boring.  He was in the signal corps, where he learned Morse code (the quick red fox jumped over the lazy brown dog) and waited (in vain) for the phone to ring.  I was quite surprised, after our family’s return from Italy, to see photos that my father had taken (on the banks of the Arno River in Florence, at the Pitti Palace) at places we had been.  My mother thinks that he even was billeted on the floors of the Palazzo Pitti in Florence, but I don’t know if that is true. 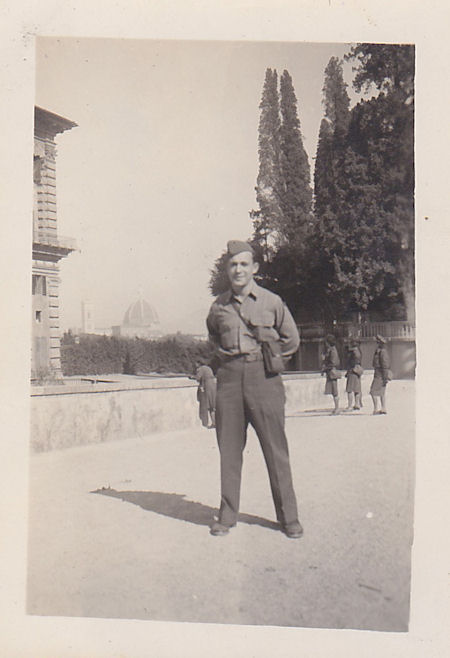 This is my father, Sidney Drazin, behind the Pitti Palace in Florence, in 1945. The Duomo is in the background.

This film is the 1960s version of WW II.  When I was a kid, I was baffled at why all the spy shows that I loved always had unrepentant Nazis in them.  Wasn’t WW II like, 100 years ago?  It was shocking to realize later, that my childhood was only a scant 20 years removed from that conflict.  There were plenty of WW II veterans watching tv and going to the movies.  Von Ryan’s Express is replete with the anti-establishment attitudes of the swinging 60s, unlike the novel.  Von Ryan in the film is brash, but he gets the job done, a much less harsh character than the novel’s Von Ryan.  Embodied by a rather tired looking Frank Sinatra (he had 50 years of hard living behind him when he made this film) his anti-hero  is meant perhaps to appeal both to veterans, and to the younger people just beginning to protest the war in Viet Nam.

David Westheimer, the author of Von Ryan’s Express, was a B-24 navigator who had been shot by Italian aviators.  He was in POW camp Stalag Luft 111, where the Steve McQueen movie The Great Escape is set, for 28 months and was released in 1945.  He wrote a memoir late in life, Sitting It Out: A World War II POW Memoir (1992) but I suspect some of his experience is reflected in this novel in fictional form.  His other well-known work was My Sweet Charlie (1965) about a black civil rights activist in a small Texas town, and a pregnant white teenager.  A tv movie of the play earned an Emmy for Patty Duke.

The character of Von Ryan is much less likeable in the book than in the film. “The colonel was tall and conspicuously erect.  His dark blond hair was short and bristling with a scatter of grey at the temples.  His face was deeply tanned except for two ovals around the unblinking grey eyes where the skin had been shielded by sunglasses.  His eyes were finely wrinkled at the corners and squinted a little from looking into the sun for enemy fighters.  His was a tough face, grim almost, with no vestige of softness of any kind.  It was, from a distance, a young face, but viewed closely was older than its thirty-six years” (Westheimer 3).  His uncompromising, martinet behavior is universally loathed by all the characters in the book, who remark that in a stolen Nazi uniform, he looks like a perfect Aryan villain.  Sinatra obviously wanted to play the strength and courage, without the military rigidity, that gets him the nickname “Von” Ryan. It was also Sinatra’s idea to change the ending.

Frank Sinatra, although he had a long career as a movie actor, was, of course, primarily a singer.  Not many people would dispute the fact that he is one of the greatest interpreters of the American popular song. His career stretched from Tommy Dorsey’s big band, well into the era where rock and roll replaced his style as the dominant one in pop music.  In the mid-1960s he was still charting hit records, although to a much older audience.  In 1965 he recorded two of the songs most associated with his later career, “Strangers in the Night” and “My Way.” 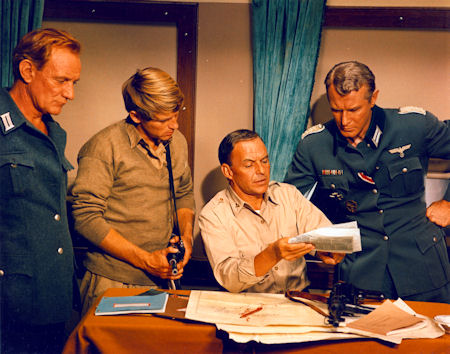 Also in that year, he made his only film as a director, None But the Brave.  An anti-war film, it depicts a small Pacific island during WW II.  A group of Japanese soldiers have been stationed and forgotten there.  An American plane crash lands, and the Japanese and American soldiers are forced to confront each other as men, not faceless enemies.  Sinatra was an old-style Liberal.  He had helped integrate Las Vegas hotels and casinos, and hosted a benefit for Dr Martin Luther King at Carnegie Hall.  Still, many of his fans were surprised that the one film in his career he chose to direct was so anti-war, at a time the Viet Nam conflict was pounding a wedge into the generation gap.

In the early 60s, Sinatra was still taking his film career quite seriously.  He spent time reading both novels and scripts in the hope of finding a good starring role for himself.  Sinatra read the novel Von Ryan’s Express, and he knew that it would be a great part for him.  20th Century Fox owned the rights, but he just called them up, and said he was ready to star in the film.  A star of Sinatra’s magnitude would not have been refused.

Sinatra, not surprisingly, wanted things done His Way.  That meant as short a shooting schedule as possible and the minimum number of retakes.  One and done, that’s the way Sinatra liked it.  This led to fierce clashes between the director, Mark Robson, and star, whose power to get the film fast-tracked, as well has his substantial salary ($250,000) and percentage of the gross, meant his opinion had to matter.  One of his biographers said, “Robson was the only director that Frank actively disliked, which must have meant he really disliked him, because he had been uncooperative, difficult and downright rude on other sets” (Santopietro 363).  Perhaps, this animosity had a positive outcome, because the film was Sinatra’s best since The Manchurian Candidate.  His performance as a seen-it-all American officer contrasts with Trevor Howard’s stiff upper lip Britisher.  Howard enjoyed the quick pace of the filming.  “Having weathered Marlon Brando’s tantrums during the tortuously drawn-out production of Mutiny on the Bounty, he found Sinatra largely affable by comparison” (ibid 364).

Also co-starring is James Brolin, father of Josh Brolin (True Grit, Men in Black 3, The Goonies) and Edward Mulhare who I loved on 60s tv in The Ghost and Mrs. Muir. The female role played by Raffaella Carra was a Hollywood addition to the plot.

Sinatra, who had a long film career, and had won an Oscar for From Here to Eternity, received some of his best reviews for Von Ryan’s Express’s. Life Magazine praised him, “Sinatra’s expertly done Von Ryan is a harsh character.  It is a role that calls for nuances that Sinatra has rarely had to express before.  The Hollywood Citizen News wrote “This is Sinatra at his best as an actor.” (Knight 356). This was an action movie before the modern era of action movie was inaugurated with Bullitt (1968) and The French Connection (1971) and the exciting pacing made the film a hit.

Filmed on location in Spain and Italy, it was one of the films of the era that made soundstage filming seem limp and insular. The POW camp was not built in Italy, as often reported, but on the front lot at the Fox Studios on Pico Boulevard, Los Angeles, California, and the tunnel scenes were filmed in Spain.  The military vehicles were real. For Sinatra fans, the sound stage scenes are most important because it is the place where his new love interest, Mia Farrow, was filming her successful tv series Peyton Place. She often joined him, as their blooming May-December romance just becoming public knowledge. 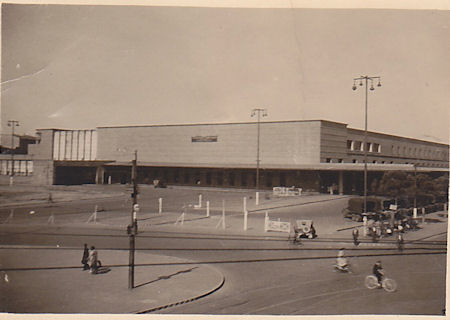 This is the Florence, Italy train station in 1945.

Robert R. Shandley calls Von Ryan’s Express “historical fantasy,” since many of the adventure elements of the film are improbable.  Note: this is not a documentary. But, it seems to me, a fantasy no doubt originated behind the barbed wire of a POW camp has more authenticity than one dreamed up by somebody without that harrowing experience.

The film received Oscar nominations for both visual and sound effects. The POW scenes are considered inspirational for the tv show Hogan’s Heroes, and Jerry Goldsmith’s score has elements that were “borrowed” for the small screen. Released just two years after The Great Escape, it certainly deserves to be considered along with that film as one of the great post WW II films about WW II. For the last time in his long career, praise for Sinatra’s acting was nearly unanimous. 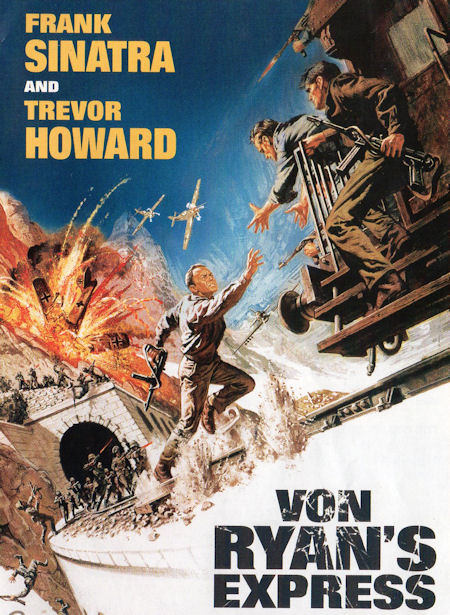