In the shadow of a dormant volcano, a bored married couple, searching for reasons to be irritated with one another, travel to Naples to sell a family villa. Bergman’s passion for serious filmmaking, and  director Rossellini, caused her to abandon Hollywood glitz for Neorealism  at the height of her career.  “Rossellini’s finest fiction film…a crucial work, truthful and mysterious” (The Chicago Reader).

Ingrid Bergman was one of Hollywood’s most dazzling stars, but she was in her mid-thirties, and it was clear that post-war movie going tastes had changed.  She went to see the film all serious filmgoers had been talking about, Open City by Italian director Roberto Rossellini.  She wrote in her autobiography, “Deep down I was in love with Roberto from the moment I saw Open City...” Dissatisfied with her career, she said, “I’d rather be remembered for one great artistic film than for all my money making hits” (Quirk 32).  She wrote him a letter, “I saw your films Open City and Paisan and enjoyed them very much.  If you need an actress who speaks English very well, who has not forgotten her German, who is not very understandable in French, and who in Italian knows on ‘Ti amo’ I am ready to come and make a film with you.  Best regards, Ingrid Bergman” (Quirk 33).  She thought if a filmmaker of his gifts had a famous actress working with him, he would begin to get the acclaim he deserved.  Supposedly, he had no idea who she was, but when told she was a leading box office star in Hollywood, he hastily proposed as a vehicle the film he had been planning with his then lover and muse, Anna Magnani, for her, instead.

When she arrived in Italy in 1949, with financing arranged through RKO by Howard Hughes, the paparazzi followed them everywhere.  As they began locations in Italy for Stromboli, he began to woo her, by the time the filming was over she had given birth to his baby. Facing a barrage of worldwide criticism, she claimed her marriage to Dr. Peter Lindstrom had been over for years, and as soon as possible, she and Rossellini were married. But the American public ostracized her. She was called “Hollywood’s apostle of degradation” and “a free-love cultist” on the floor of the US Senate. Senator Edwin C. Johnson (D Colorado) who was Swedish-American, proposed that films should only be allowed to be shown depending on the morals of the artists involved.  She was “a powerful influence for evil” and she had “perpetrated an assault upon the institution of marriage.” (Thompson 89). Rossellini was “a narcotic addict, Nazi collaborator and black market operator” (Gundle 67). Their lack of shame, as they lived openly together, was unforgivable. 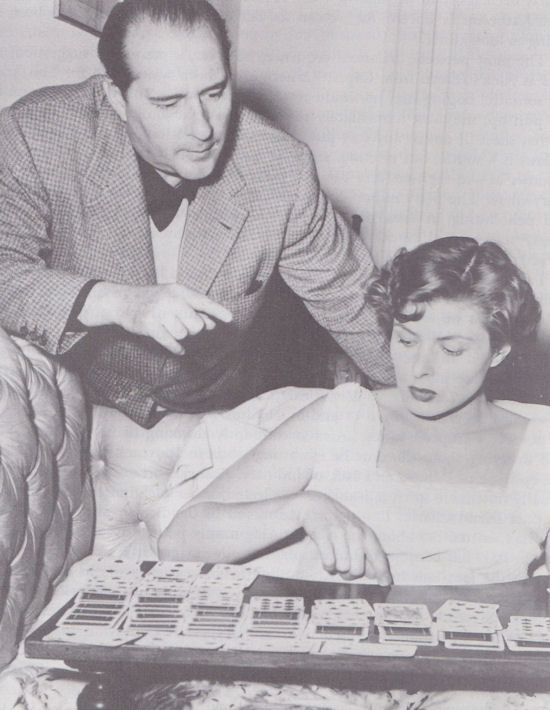 It was an era where names were named, and exhibitors wondered if his tirade would become policy.  Bergman and Rossellini hastily divorced their spouses and married each other. After their son was born, they had twins, one of whom is the actress Isabella Rossellini. And they made six films together, one of which you’ll see tonight.  Bergman and Rossellini’s marriage was annulled in 1958. The films they made together had a limited release, and were unsuccessful both in Italy and abroad.  Yet, their scandal has continued to live on.

Voyage to Italy, sometimes called Journey to Italy was the third collaboration between Rossellini and Bergman.  Some critics have considered it his finest film, and a landmark of world cinema.  It spent many years in the top ten listing of the French film journal Cahiers du cinema.  In 1958 it was ranked third, behind Murnau’s Sunrise and Renoir’s Rules of the Game,  ahead of Eisenstein, Griffith, Welles, Dryer, Mizoguchi, Vigo, von Stroheim, Hitchcock and Chaplin, by those future directors like Godard, Truffaut, Chabrol, Rivette and Rohmer, who would internalize its narrative rules-flaunting technique in their own work.

Not everyone here tonight will share their enthusiasm, I predict.  Rossellini said, “I consider Viaggio to be very important in my work.  It is a film which rested on something very subtle, the variations in a couple’s relationship under the influence of a third person, the exterior world surrounding them” (Brunette 153).  It is also a metaphor for the crumbling marriage of the director and his star.

Italian critics were brutal, one wrote, “In this film there is no subject, no dialogue, no script, no direction.  It is a jumble of images that revolve around emptily, tediously, without the slightest glimmer of interest…Viaggio in Italia is more than an ugly film.  It is a true and proper insult to the intelligence of the audience” (Bondanella 98). Of course, part of their outrage was the use of Hollywood stars, a seeming rebuke to the tenants of neo-realism.

The director intended to base the film on a novel by Colette, Duo (1934) about a marriage that falls apart because of the husband’s need to conform to a traditional marital role, rather than responding to the specific needs of his wife.  According to Bergman, he did envision it as a film that would be popular and profitable (Bergman 306).  Rossellini wanted an international male star to play opposite Bergman, and cast George Sanders, who had a suave on-screen image, but who was in his private life insecure and unhappy. 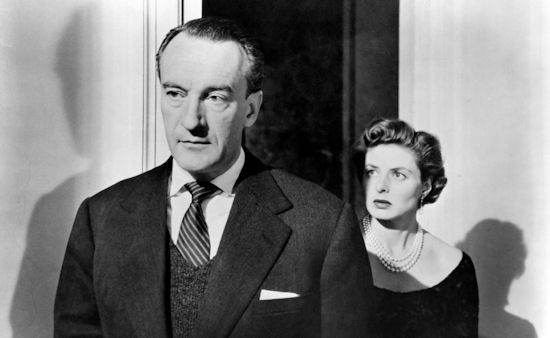 Sanders had been born in St. Petersberg, Russia, to English parents.  They fled the Russian Revolution back to England.  He worked in both the textile and tobacco businesses, before leaving commerce for the stage, and then films.  He had played the lead in two B-movie detective film series, The Falcon and The Saint, and during WW II often played sinister Nazis.  He also acted in A films, like All About Eve, for which he won an Oscar as a tart tongued theater critic.  He was married four times, including to both Zsa Zsa and her sister Magda Gabor.

By the time he arrived in Italy, Rossellini discovered the rights to the novel belonged to someone else, and began drafting a treatment that incorporated some of the themes of her work.  His lack of a firm plan, and his reluctance to even give his actors dialogue undermined the professionalism of both of his leads.  Bergman was used to it, although it was clearly a struggle for her throughout their collaborations.  But, Sanders was upset, talking nightly to his psychiatrist, and to his wife, Zsa-Zsa Gabor, who was invited to come in the hopes of cheering him up.  Finally, Rossellini consoled him, “What are you getting so depressed about, at the worst you’ll have made one more bad film—nothing worse than that can happen…we’ve all made good films and bad films. So, well make another bad one” (Brunette 157).  The director confessed later that it was Sanders’ black moods and not his actor’s persona that made him perfect for the film.  Sanders later discovered that financial backing for the film was contingent upon his being in it.

This film has no plot, it is a series of observations of a couple’s fracturing relationship.  Leo Braudy wrote, it contains “some of the most abrasive scenes between a man and a woman that have ever been filmed.  But, it is an abrasion of boredoms…” (Brunette 160).  The characters have no back story, because their role is symbolic, Alex represents the “soulless materialism that…was for Rossellini the chief evil of post-war European society.  Alex is constantly thinking of his business affairs and worrying about the time he is wasting in Italy, a country he views as the epitome of laziness and lack of industry.  His wife is a romantic, with a completely opposite view of Italy.  Italy is both these things, and neither, sensual, life-affirming and chaotic.  The Joyces spend a great deal of time in their car, traversing Italy but isolated from it.  They don’t know Italy, and don’t want to know it, it’s too emotional, too foreign.  Katherine’s wanderings confront passions that alarm her. 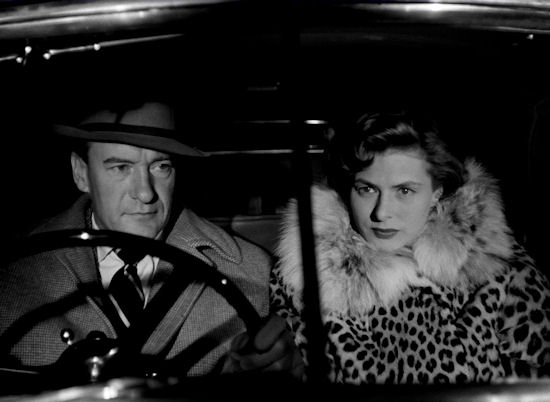 Katherine’s leopard coat shows that she is at heart a wild creature, tamed by her marriage.

Rossellini wanted the scenes of wandering and looking at historic sites to convey a clash of civilizations.  He disdained the Hollywood technique of master shot, medium shot, close up, reaction shot.  Sometimes, you cannot see what Katherine’s character is seeing, only the expression on her face.  Each of the five tourist site visits, The National Archelogical Museum, the site of the Cumean Sibyl, the lava fields near Vesuvius, the Fontanelle catacombs and the excavations at Pompeii reveal something significant about Katherine and her relationship to her husband.  According to one writer, David Smit, this resulted at least in one spectacular scene, in which the shots at the excavation at Pompeii were planned, but not what would be revealed (Smit 168).

Bergman recalled, “The one (of her Rossellini films) I didn’t particularly like, Voyage to Italy, is now shown very often on the television and is considered an extremely avant garde picture for its time. But at the time I didn’t enjoy it. George Sanders, too was very unhappy and couldn’t get into the mood of improvisation–he was a problem on the picture and everything was very difficult. I’m surprised now that it is well received. I never thought that would happen (Rossellini and Schirmer 29).

“Viaggio in Italia will never become a popular film. Rossellini’s avoidance of transitional dramatic construction with its increase of narrative suspense toward a resounding climax, the flat delivery of the English dialogue and the essentially anti-theatrical acting style of his case, his long takes and avoidance of climactic editing techniques, and his emphasis on minute psychological nuances in the lives of vapid and superficial protagonist will never result in box office appeal in any commercial cinematic culture”  (Bondanella 111).