Two prim English school children, lost in the rugged Australian outback, encounter an Aborigine boy on his six month “walkabout” his journey to adulthood. Incapable of taking care of themselves, he becomes their spirit guide, illuminating the clash between nature and civilization. “Walkabout is one of the great films” (Roger Ebert).

Walkabout was filmed in remote locations across the Australian outback in the summer of 1969, and heralded the flowering of Australian cinema. Although Down Under had a relatively vigorous film production history in the silent era, after sound came in the number of productions dwindled, and Hollywood films became dominant. There were only 39 films made in Australia between 1946-1964. In the early 1970s, the government offered financial assistance to filmmakers in a concerted effort to create an on-screen validation of Australian culture. Talented directors as Peter Weir, Bruce Beresford, Fred Schlepsi, Jane Campion and Gillian Anderson, and actors like Mel Gibson, Judy Davis, Toni Collette, Sam Neill and Geoffrey Rush emerged on the international cinema forefront. Anyone of a certain age remembers the excitement which greeted releases like Picnic at Hanging Rock, The Last Wave, Breaker Morant, Gallopoli, My Brilliant Career and the Mad Max films. Walkabout, the first truly international Australian film, was, however, a financial failure both in Australia and abroad.

Walkabout is not strictly an Australian film, made by a British director with a script adapted by a British playwright from a children’s novel by British author James Vance Marshall. The book shares the film’s wonder with nature, although it doesn’t find it quite so red in tooth and claw. Both the imperialistic racism and sexual repression are much franker in the book, and handled with considerable discretion by Roeg and his screenplay writer, who supplied the director a finished script of only 14 pages. In the book, the Aborigine is treated deferentially for his survival skills, but addressed dismissively as “darkie.” The novel was written in 1961, and if this detail of the book had been transported to the film made a scant 10 years later, Roeg’s Walkabout would not be the widely regarded work that it is. What a difference a few years makes! In fact, Marshall’s salient point was that the white children, too, could learn to survive, even if abandoned by their skilled companion. 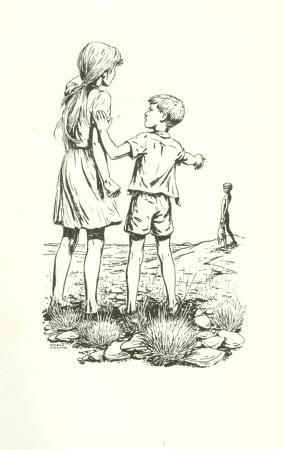 An illustration from the novel by James Vance Marshall

Filmed in central Australia, Walkabout was financed by $1 million American dollars and released by 20th Century Fox. The film stars 14 year old Jenny Agutter, who continued her acting career, David Gumpilil, an Aborigine actor in his first film, and the director’s son, 6 year old Lucien John, in his only acting role.

Nicolas Roeg was a cinematographer before he became a director, and this is clearly a cinematographer’s film. The imagery is beautifully composed and shot, and, at times, juxtaposed with disjointed sound. The urban montages are jarring, and scenes of nature intentionally edited with a more lyrical rhythm. The style of the film is extremely self-conscious; one is always aware that one is watching a film.

Roeg said he always loved the movies, and got a chance to immerse himself in them when he became a projectionist for the Army during WW II. His father knew the head of a movie studio, so at 19, Roeg got a job as a cameraman’s tea boy and film loader, then progressed to clapper boy. He also spent time learning to edit, and worked his way up through the ranks to Director of Photography. He photographed the train explosion in Lawrence of Arabia, although director David Lean later fired him from Dr. Zhivago for his penchant for using reflectors instead of lights. He was critically praised for his cinematography, especially for the stylized Masque of the Red Death for Roger Corman. Roeg was the director of photography on the first Casino Royale, Far From the Madding Crowd and Fahrenheit 451; he greatly enjoyed his collaboration with François Truffaut on the latter film. Roeg thrived in the middle of Swinging 60s London, which was how he came to co-direct Mick Jagger in Performance, a polarizingly radical work now considered an invaluable part of the British film canon. 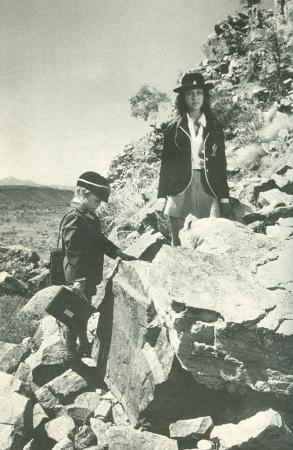 Jenny Agutter was in ballet school when she auditioned for the part. The film was almost financed by Apple, the Beatles company, and part of her motivation for accepting the part was the hope of meeting the Beatles. She remembered that there was little acting required (in fact Roeg had the school uniform in which she auditioned reproduced by the costumer) and her memory was that it was shot mostly in sequence. The almost four months of shooting took up the time she would have been taking exams had she wanted to continue her education, but by the time the film was over, she had decided that she wanted to make acting her career. There was no money for location scouting in Australia, so the small cast and crew used maps and talked to locals to get an idea of where they wanted to film. There were no rehearsals; the next day’s shooting was simply discussed after packing up for the day. Except towards the end of the shoot, everyone camped out together, including Roeg’s family, little Lucien John had the companionship of his brothers on location. Gulpilil was an uninhibited actor “As close to a fresh person that I have ever met” remembered Roeg. Agutter was aware of the sensuality of the part she was playing. The nude swimming scenes were possible because she had been living with the cast and crew in rather primitive conditions all along, and Roeg stationed the camera and its telephoto lens far away to make her feel more comfortable. 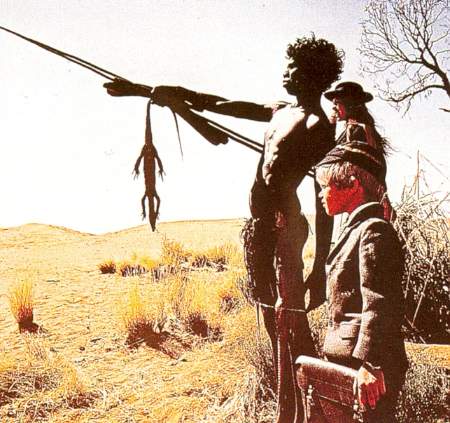 Gulpilil is arguably the most prominent Aboriginal actor today. Prior to 1970, Australia was reluctant to deal cinematically with their indigenous inhabitants. The most famous Australian film prior to Walkabout tackling this subject was the melodrama Jedda (1955) which, if categorized by African American film historians would fall into the “tragic mulatto” category. Jedda is an Aboriginal raised in a white family, whose love for another Aboriginal leads to identity crisis and tragedy. Gulpilil brought international attention to a people who had little on screen identity. He was in a professional dance troupe when recruited for his part in Walkabout. He had seen a few movies, mostly Westerns. He has continued to live on his ancestral home, Arnheim Land, which is the site of the last section of the film. When the film was shown at Cannes, the organizers were a little concerned that they were being visited by a “savage” but, dressed in a new tuxedo, Gulpilil’s natural grace didn’t produce a misstep. His roles in films like Rabbit Proof Fence and The Last Wave are part of a memorable career which includes 26 films to date, including the international blockbuster, Crocodile Dundee. 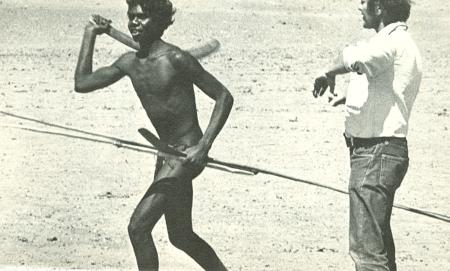 McFarland and Mayer describe Walkabout as an “intensely poetic evocation of the seventies of the Australian desert, and its unusually sympathetic view of its black protagonist is simply too strange, too removed from the conventionally accepted images of Australia and its people to be a box office success.” Modern viewers might be made uncomfortable by the image of the Noble Savage which often illuminates the fundamental misunderstanding between colonizing and indigenous peoples. Pike and Cooper state, “some were made uneasy by the intense romanticism and willful thematic naievity, while others applauded it as a ‘paen to nature’s infinite variety and infinite menace.’

Roeg’s film, for all its narrative ambiguity, validates Western perceptions about the death of indigenous culture. Of course, historically, Australia was the destination of transports filled with those who overcrowded British prisons. They had scant respect for the hundreds of distinct nations of Aboriginal peoples who populated the harsh landscape. Aboriginals did not get the vote until 1962, and other rights as Australian citizens were slow in coming. Although Gulpilil’s Stone Age skills seem dramatized in the film, Jenny Agutter remembered that although Gulpilil spoke English, his cultural space was so different that communication was difficult. The mating dance performed in the film was given to him by tribal elders for personal use, and allowing it to be filmed resulted in a depression of loss for the actor. Agutter said that this is the one film on which she worked in which the director’s vision did seem to match his aspirations, and Walkabout’s deep mystery has remained potent over the years. 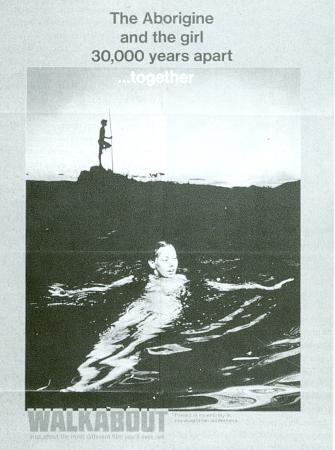 20th Century Fox was clearly a little mystified how to promote the film.