A thrill-seeking society girl flirts with misbehavior and the law, but sees the error of her ways after a kidnapping ordeal. This silent era melodrama…or is it a comedy?…is receiving a rare screening June 1, 2003 in Los Angeles. I’ve never seen it, but wish I could, and here’s the reason why:

Many years ago I bought a photograph from a selection of stills dumped in a cardboard carton and abandoned at the back of the gift shop in the MGM Grand Hotel in Las Vegas. They were all from around 1925-26; there were quite a few from the silent Ben-Hur. It was not long after MGM had auctioned off the backlot, thoughtlessly dispersing half a century’s worth of props, costumes and memorabilia into collections around the globe. “The Catwoman” has tantalized me for many years, since I was never able to identify the film from which she originated. 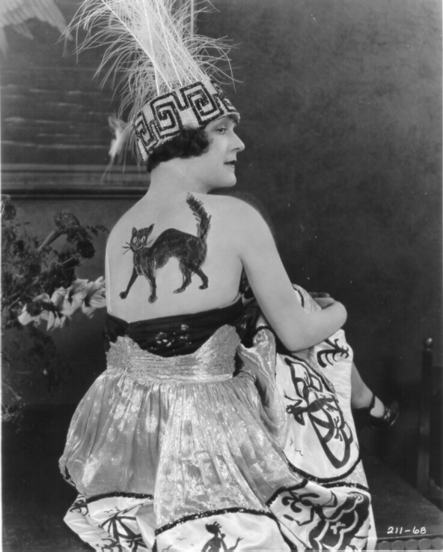 Recently, I bought the fascinating and lavishly illustrated Ruth Harriet Louise and Hollywood Glamour Photography by Robert Dance and Bruce Robertson. The authors profile the career of Miss Louise, who was an MGM studio photographer 1925-1930, crafting the images of new stars Greta Garbo and Joan Crawford, among others. In the back of the book is a table that explains how to read the MGM Production codes inked in the corner of each photograph. This photo was numbered 211, not a film on the list in the book’s appendix. I wrote to the publisher, who forwarded my e-mail to the authors, and Mr. Dance identified the still as being from The Way of a Girl, released April 11, 1925. So, a mystery solved, thanks to Mr. Dance’s generosity! He said that he did not think that it was a lost film, although he had never seen it.

I was curious to see if I could conjure a shadow of this film. The MGM stills collection at the Margaret Herrick Library in Los Angeles has but a single photograph, a posed publicity still of Eleanor Boardman pretending to photograph heavyweight boxer Floyd Johnson, who has a cameo in the film. Of course, I know why there are not more stills available for study, because the contents of that particular file drawer must have been emptied into that cardboard carton destined for the MGM Grand gift shop. Another collection at the Library has a few more stills, numbered 211-6, 9, 26, 65, 76, 78, 95. Several of them show Miss Boardman in a hideous dress made out of a blanket, supposedly of her own design, according to the caption under a different portrait of her in the scratchy gown in a Photoplay magazine from June, 1925. She did in fact design and make much of her personal wardrobe.

One of the set pieces in the film is an “Artist’s Ball” according to the plot summary in the AFI catalogue. And this, no doubt, is the origin of my treasured costume check still. A long shot of a decadent frolic shows languid girls arrayed in De Mille-esque sin, along with a bevy of dainty Pilgrims in sheer skirts and some slave boys, all with lavishly painted body designs. 211-65 shows four plump “girls of the chorus” in skimpy diapers and bras, elaborate head-dresses and painted skin, looking like weary whores. I was not allowed to make any copies, so I sketched one in my notebook. 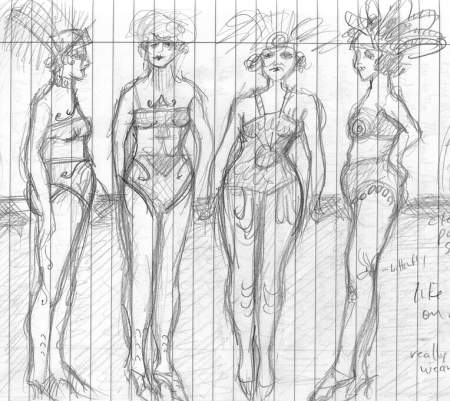 The AFI summary recounts the film in melodramatic terms, yet Miss Boardman remembered it as one of the few comedies she ever made. In Speaking of Silents she remembered, “In 1925, I starred in a satirical comedy for MGM, The Way of a Girl, directed by Robert G. Vignola. I drove a car in it and there was a scene where my foot was on the gas pedal–it was a close-up. The leading man, Matt Moore, was a friend of mine, and used to play tennis with me.” 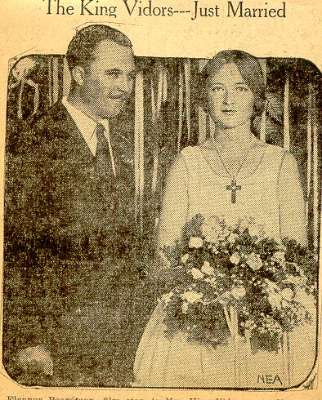 Eleanor Boardman found her immortality as the heroine of The Crowd, an influential and moving film made by her then husband, director King Vidor. The caption reads, “Eleanor Boardman, film star, is Mrs. King Vidor now. She married the noted director at the Hollywood home of Marion Davies. And here they are right after the ceremony.”

Here is Photoplay‘s capsule review of The Way of a Girl: “Proving that original ideas are always welcome. It begins like a cartoon comedy with the characters, in miniature, hopping about the typewriter of the scenario writer. At basis, the picture is just a flaming youth story, but the novelty of its presentation and the work of Eleanor Boardman, Matt Moore and William Russell make it splendid entertainment.”

A new print, made directly from a surviving nitrate original is being is being revived for a “William Wellman before Wings” program by the LA Silents Society. Although the direction is credited to Robert G. Vignola, Wellman “directed approximately one-third of the feature as a salvage job during his brief tenure at M-G-M in the ‘twenties, and remained uncredited for his participation.” This is the interlude immortalized by Wellman’s appearance in a line up of contract directors in a promotional short subject filmed by MGM in 1925 seen occasionally on TCM. Mr. Dance said that he did not think The Way of a Girl was a lost film, and so he is proven correct. But, when can the rest of us have the pleasure of seeing it? Won’t someone who sees the film write to me and tell me if The Catwoman is indeed in The Way of a Girl?

“Reckless–she didn’t care who made the speed laws so long as she could break them! Flaming adventure, speed, a race with convention. A girl of today in whose veins coursed the blood of the primitive Eve–All the restraints of her society life cast to the winds in one glorious hour of freedom. A picture with a spell of its own…thrilling with adventure. The film of perfect delight. Follow the Adventure Trail to–The Way of a Girl”

Sources include Speaking of Silents by William M. Drew; June, 1925 Photoplay magazine, Ruth Harriet Louise and Hollywood Glamour Photography by Robert Dance and Bruce Robertson. All illustrations collection of Moviediva. The wedding picture is from a collection of undated clippings from the late 1920s to the early 1930s.