Awakened from a premonition of death, a renowned professor drives to a career award ceremony with his daughter in law and suffers her rebuke for his chilly emotions. His day long reflections are “a poem…that wanders through the borderland between the dream world of life, and the real world of dreams” (Newsweek).

There are different words in Swedish for wild and cultivated strawberries. The title of Bergman’s film, Smultronställe, literally translated means “the place where wild strawberries are found.” The late June season is brief, and traditionally each family member claims a particular wild strawberry patch as theirs, alone. The word also has the symbolic meaning of a treasured moment in the past that one revisits as one ages.

Director Ingmar Bergman was born in Uppsala, Sweden, in 1918. He had a strict Lutheran upbringing overseen by his implacably rigid father, a pastor. His childhood was not pleasant. When punished, he would be locked in a cupboard and told he’d be joined by “things that will eat your toes.” His childhood ambition was to be a projectionist, the result of sneaking to movie matinees after Sunday church services. In college, he majored in literature and art history. He began to write and direct plays and this led to his becoming a screenwriter. His first filmed script was in 1949, Torment, about a schoolboy tortured by a sadistic schoolmaster. He worked as a “script girl,” checking film continuity for other directors, giving him a chance to see how films were made. After a number of more formulaic movies, he made his first mature work in 1953, Sawdust and Tinsel.

1957 was an extraordinary year for him, the year of both The Seventh Seal and Wild Strawberries. After directing The Seventh Seal, he directed three plays, and then entered Karolinska Hospital in Stockholm, admitted for observation of some gastric and stress related complaints. He had separated painfully from his third (of five) wives, and was also breaking up with his mistress (one of many, many) Bibi Andersson (who plays Marianne in the film). He wasn’t speaking to his parents, and was analyzing the reasons for his bitter estrangements from them. He felt his mother hadn’t wanted him, a fact later verified in her diaries. The professor in Wild Strawberries, Isak Borg (his name means ice fortress), was meant to be his implacable father, but instead became more and more like himself, “I was then 37, cut off from all human relations. It was I who had done the cutting off, presumable as an act of self affirmation. I was a loner, a failure. I mean a complete failure. Although successful. And clever. And orderly. And disciplined.” (Bergman).

Although he gave interviews about a particular moment of nostalgia that inspired Wild Strawberries, on reflection, he found it a lie. He realized he was living perpetually in his childhood, “I am living permanently in my dream, from which I make brief forays into reality.” (Bergman). It was almost much later that he realized his parents were ordinary human beings, that his own preoccupations had himself made them giants towering over his life in unwholesome and unproductive ways.

He cast Victor Sjöström, a pioneering silent era director, on the suggestion of his film’s producer. Sjöström was an important director of Swedish films, from the country’s first great cinematic flowering in the 1920s, who also acted in many of his films. Sjöström came to Hollywood, where his name was adjusted to Seastrom, to direct He Who Gets Slapped with Lon Chaney and two of Lillian Gish’s masterpieces, The Scarlet Letter and The Wind. Bergman was a great admirer of Sjöström’s film, and he had known him for many years. Sjöström bore a physical resemblance to Bergman’s father, and Sjöström’s father, too, was a religious zealot.

“What I had not grasped until now was that Victor Sjöström took my text, made it his own, invested it with his own experiences his pain, his misanthropy, his brutality, sorrow, fear loneliness, coldness warmth, harshness and ennui. Borrowing my father’s forum, he occupied my soul and made it all his own—there wasn’t even a crumb left for me! He did this with the sovereign power and passion of a gargantuan personality. I had nothing to add, not even a sensible or irrational comment. Wild Strawberries was no longer my film, it was Victor Sjöström’s!” (Bergman). But, Bergman adored the older director’s films, “he was steeped in the movies of the man he considered the supreme genius of Swedish cinema.” (French).

Another important influence on the film was that Sjöström had been one of the first European actors to play Willy Loman in Death of a Salesman, a much acclaimed performance that Bergman likely would have seen. Certainly, Sjöström had this other memory play in mind as he was playing Isak Borg.

Sjöström was old and ill, and worried that he would not be able to sustain his energy or memory through the film, as was the company that insured the production. His irritability was soothed by Ingrid Thulin’s agreement with Bergman to always take the blame herself if his memory problems ruined a take. Once Bergman realized the importance of Sjöström being finished in time for his ritual 4:30 pm whiskey, filming proceeded much more smoothly.

Wild Strawberries could be described as a “road movie” and in fact, Bergman described it that way, himself. This particular road was a long one. In 1957, the journey would have taken at least 12 hours, and even today at least ¾ of that time. He has a very smooth ride, though, a American car, a 1937 Packard limousine. The American car has left hand drive and is driven on the left hand side of the road, it would be more than a decade before Sweden conformed to the European standard of driving, as we do, on the right.

“There was a feeling abroad that film had come of age. That a mature international cinema was on the point of replacing industrial Hollywood. That a generation had arrived that could make movies as fluently as they might once have written novels. That there was a large, worldwide audience for movies innovative in form, personal in character, moral philosophical and political in thrust, intellectually playful and deeply serious in tone.” (French).

Bergman wrote, “I myself, have never had any ambition to be an author. I do not want to write novels, short stories, essays, biographies or even plays for the theatre. I only want to make films—films about conditions, tensions, pictures, rhythms and characters which are in one way or another important to me. The motion picture with its complicated process of birth, is my method of saying what I want to my fellow man.” (Malmström and Kusher).

I love stories about how ridiculous the Oscars are, and here is a new favorite. Wild Strawberries was nominated for “Best Story and Screenplay written directly for the screen” Bergman’s first nomination. Also nominated were François Truffaut’s The Four Hundred Blows, Alfred Hitchcock’s North by Northwest, Blake Edwards’ Operation Petticoat and the Doris Day Rock Hudson comedy, Pillow Talk. And, the Oscar goes to…Pillow Talk.

“There was, among certain filmgoers in the 1960s, an appetite for difficulty, a conviction that symbolic obscurity and psychological alienation were authentic responses to the state of the world. More than that, the idea that a difficult work had special value—that being challenged was a distinct form of pleasure—enjoyed a prestige, at the time, that is almost unimaginable today. We would rather be teased than troubled, and the measure of artistic sophistication is cleverness rather than seriousness.” (AO Scott.) 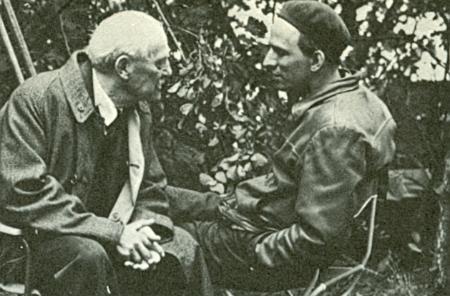