Desperate to retain the Stay Put Lipstick account, an ad man feigns a romance with sexpot Rita Marlowe. Director Tashlin was a Looney Toons auteur before bending his knack for eye garish surrealism to a human cast. “Tashin is the original pop culture Pop Artist.”—J. Hoberman.

Director Frank Tashlin came to live action films through animation. His comic book career began when he drew a strip for his Queens junior high school newspaper. The Fleisher Brothers, animators of Betty Boop and Popeye, had a studio on Times Square and he began running errands for them. Arriving in Hollywood in 1933, he began working at Warner Brothers on both Looney Tunes and Merrie Melody cartoons. Outside of WB, he also worked on some of MGM’s Flip the Frog and Disney’s Mickey Mouse and Donald Duck cartoons. He wrote and directed over 60 all together and was one of the top animators in the 1930s and 40s. His first live action work was as a gagwriter for the Marx Brothers, Red Skelton and Bob Hope. Hope felt one of his films, The Lemon Drop Kid, was a disaster, and he asked Tashlin to reshoot some of it anonymously. He rewarded him by giving him free rein, and screen credit, directing Son of Paleface (1952).

Tashlin’s talent couldn’t be compartmentalized. He was painter, writer, cartoonist, and he worked both inside and outside the studio system in live action and animation. He was a director and producer in films, tv, radio, wrote and illustrated children’s books. His comic strip for the LA Times, “Van Boring, He Never Says a Word” was so popular, there were even promotional Van Boring dolls. In the cartoon universe he adored, anything goes, as long as you can draw it. Tashlin’s garish comic films of the 1950s and 60s took this rule into the live action realm, where their raucous self-referentiality lands them in a unique niche. His films were considered by contemporary critics to be rather brassy and vulgar trifles for the likes of Martin and Lewis, Bob Hope, Doris Day and Jayne Mansfield.

Tashlin’s films have been somewhat neglected in the US, in part because of his close association with the most popular comedy actor of the period, Jerry Lewis. It was not so much Jerry Lewis that French directors like Godard and Truffaut adored, but rather his films with Tashlin. They loved the self-referentiality and parody he used, and incorporated the looks into the camera and comments on the action into their own films. Tashlin often told the story of being in Paris in the late 50s and seeing a magazine, Positif, with his name on the cover. He couldn’t read French, but he could see it was 30 pages, by different authors, in praise of his work, scoffed at by American film writers.

Tashlin made a couple of bizarre films with Jayne Mansfield, who one might argue is a cartoon version of 20th Century Fox’s other zaftig blonde, Marilyn Monroe. Mansfield’s first real success had been in the Broadway version of Will Success… and her part was an explicit parody of Monroe. Her first film with Tashlin at Fox was The Girl Can’t Help It, which includes many early stars of rock and roll, like Little Richard and Fats Domino. 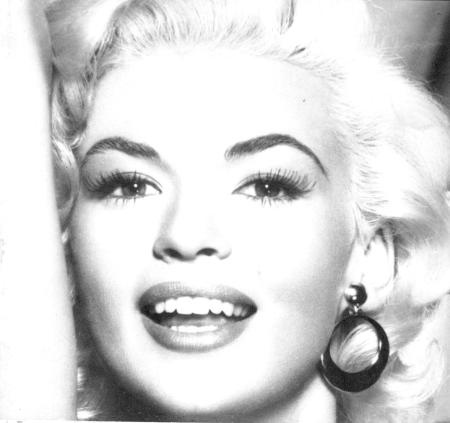 Tashlin didn’t want to make a movie of the Will Success Spoil Rock Hunter? but Fox couldn’t sign Mansfield as a star without it. The stage play had been a savage take on the film industry, written by George Axelrod, author of The Seven Year Itch, one of Marilyn’s biggest hits. Mansfield had tried out for the part of “The Girl” in that film, played so memorably by Marilyn. Saddled with Rock Hunter, Tashlin only spent thirteen days crafting the revamp that would become his favorite film. Producer Buddy Adler told him, “Everybody advised me not to let you do this, but go ahead, you know what you are doing. So, you see, because of Adler, there was no compromise on Rock Hunter. He let me do it my own way.” (Bogdanovich). He scrapped nearly everything of the plot and characters, except Rita Marlowe. The film was now about an ambitious advertising copywriter, and his pursuit of the endorsement of a Hollywood star, whose red lips, big breasts and dyed poodle were an embodiment of 1950s hedonism. The film skewers other mid-century obsessions, Freudian analysis, bathrooms, the creeping influence of rock and roll and television amongst oodles of sublimated sex and desire. “The most absurd figure in Tashlin’s films is not the heavy bosomed blonde but the pathetic male in a pure, helpless state of arousal, continually provoked by the eroticized environment that surrounds him.” (Kehr). 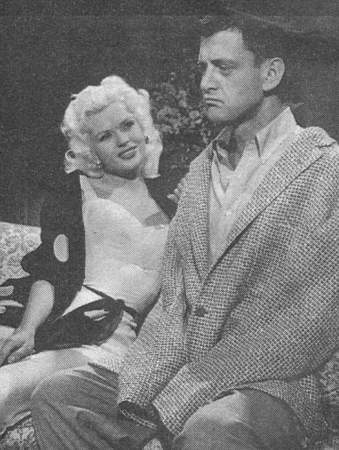 Vera Jayne Palmer was born in 1933 in Bryn Mawr, PA. She idolized Shirley Temple, and dreamed of becoming a movie star. Pregnant at 17, she married Paul Mansfield and convinced him to move to Hollywood to pursue her dream. She began making the rounds, sometimes with little Jayne Marie in her stroller. Her figure matured to an eventual 41-18-38, and she realized that in the right outfit, she could always find someone to take her photograph. Teaming with Jim Bryon, an aggressive publicist, she began to be noticed. In 1955, he smuggled her uninvited on a press junket for a Jane Russell film, Underwater. A wardrobe malfunction garnered her all the publicity she could wish for. Her combination of innocence and seduction appealed to the repressed sexual mores of the time. She went everywhere, posed endlessly for photos, accepted the titles of Miss Freeway, Miss Fourth of July and Miss Electric Switch. She did not want to play the part of bombshell Rita Marlowe in the stage play, Will Success Spoil Rock Hunter? and overacted to ruin her audition, but the exaggerated performance was just what they were looking for. Although not a dumb blonde in real life, she realized the value of her public image. She had already ditched her first husband when she met and married Mr. Universe, Mickey Hargitay, another exhibitionist who shared her love of publicity. One of Mae West’s stage entourage of musclemen, he was billed as “the most perfectly built man in the world. He plays Bobo Branigansky in Rock Hunter. Their daughter is Mariska Hargitay, the grim faced Olivia of tv’s Law and Order.

Jayne bought the ruin of a mansion at 10100 Sunset Blvd for $76,000. Singer Rudy Vallee built it but never lived in it. Mickey had been a carpenter and a plumber, so he did the renovation work himself. She traded promotional appearances for materials, like the wall to wall pink shag carpet. Everything was pink, pink, pink. The exterior stucco was painted pink and incorporated quartz grains, to sparkle in the sun. The bathtub, fireplaces and pool were heart shaped, and cupids were everywhere. But, by 1958, she was already a has-been—her brief moment of stardom over. Her uncooperativeness with the studio, like Monroe, she wanted to be taken seriously as an actress, exiled her to cheapies here and abroad. She would never again have the fame she had with her two Frank Tashlin movies. Not really an actress, or even a movie star, she was a celebrity, more famous for her death in a gruesome car crash at the age of 34 (three of her five children, Miklos, Zoltan and Mariska, were in the back seat) than her life or work. She’d already had five children and three husbands, perhaps a fourth. She lived fast and died young, but has never had the cult following of Marilyn, Elvis or James Dean. The Pink Palace still stands on Sunset Blvd. 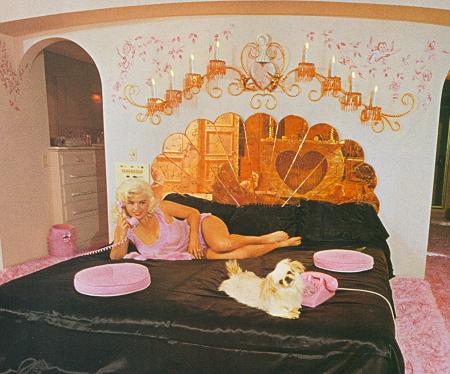 Tony Randall is hilarious, a master of both verbal and physical comedy. He’s probably the most famous actor today in this film, thanks to his beloved television work on The Odd Couple. Randall was born Leonard Rosenberg in Tulsa, OK, the son of an art dealer. He came to NYC to study acting when he was 19. His service in WWII interrupted his career, and after is discharge he did a lot of work in radio, he ribs radio as well as television, here. His big break was in the long-running radio drama, I Love a Mystery and then in new medium of television, where he co-starred with Wally Cox in a favorite of my mother’s, Mr. Peepers. This is only his second movie (Oh, Men, Oh, Women, a satire of psychiatry preceded it). He was closely identified with the third wheel/closeted gay character in the Rock Hudson, Doris Day comedies of the 1960s, like Pillow Talk. One of his last movie roles was in the delightful Down With Love a parody of those films, acknowledging this avatar—although David Hyde Pierce played the “Tony Randall character” in the film. Tashlin said admiringly of Randall, “Oh, he’s great. Like a comic machine. You feel like (violin virtuoso) Heifetz when you work with him.” He appears here even over the 20th Century Fox logo, “I wanted to make a picture where I got a laugh faster than anybody else—I guess that’s where it started. Also, I hate credits. Who wants to sit there and read all those names?”(Bogdanovich) 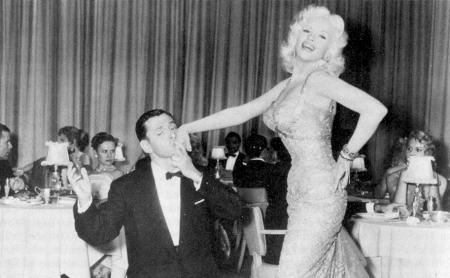 Randall co-starred with both Jayne Mansfield and Marilyn Monroe (in Let’s Make Love). He recalled, “At least Mansfield tried to be a professional. She’d show up and rehearse and work and shoot it. At that, she was good. And she had some humor about her. Monroe! I never could understand what it was all about. She was absolutely talentless. To work with her was agony. In the first place, she was never there. You’d wait; five o’clock at night, she’d show up on the set.” (Buckley).

Mansfield is delightful in Will Success Spoil Rock Hunter? She’s beautiful and curvaceous (to say the least) but has comic timing and a sympathetic warmth that many other bombshells couldn’t–still can’t–muster. There are long takes in this film that demand a high level of ability. Henry Jones, as Randall’s pill popping, martini swilling advertising mentor, and Joan Blondell as Rita’s mama hen provide excellent support, and are given scenes in which to shine.

Frank Tashlin’s time has come. “Decades before postmodernism became fashionable, Tashlin was gleefully constructing a world of simulacra and surfaces in which images refer only to other images and characters cobble their identities from mass media and pop culture.”—Martin Rubin. 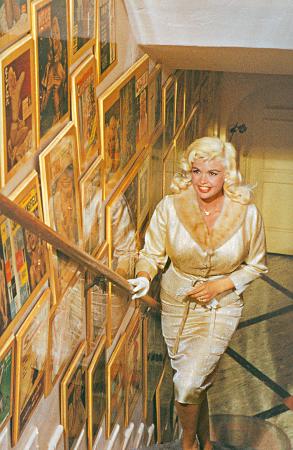 Hundreds of magazine covers were framed in her hallway.