Kay Kyser, The Ol’ Professor of Swing, arrives at spooky Bellacrest Mansion and tangles with three horror film icons to save a beleaguered heiress. UNC alum Kyser’s radio sensation, The College of Musical Knowledge ran 11 years. He retired to Chapel Hill, and his daughter, Kimberly Kyser, introduces this special event. Shown on DVD.

Kay Kyser, born in Rocky Mount, North Carolina in 1905, went to UNC Chapel Hill, where he became head cheerleader. He channeled his natural ebullience into leading an extremely popular swing band which had eleven number one records in the 1930s and 40s, including the memorably catchy “Three Little Fishies” sung in baby talk. His radio show, The College of Musical Knowlege parodied the game shows just becoming popular, and is recreated at the beginning of the film. The song, “I’d Know You Anywhere” was nominated for an Academy Award.

Horror movie comedies were a common genre back in the Hollywood studio days. Why? Most of them are not particularly funny. Do they date before The Cat and the Canary, which serves as a template for this film’s plot? Harold Lloyd and Buster Keaton both made haunted house 2 reelers, Bob Hope did The Cat and the Canary and Abbott and Costello Hold That Ghost, as well as all their …Meet Frankenstein movies. This one has the benefits from the charm of Mr. Kyser, and the spirited (sic) performances of Boris Karloff, Bela Lugosi, and, particularly, Peter Lorre. Nobody ever worked a cigarette holder like he does. A novelty electronic instrument, the Sonavox also makes an appearance. It’s like a vocoder, giving the user an eerie tone of voice, befitting the ghost of Elmer Bellacrest. 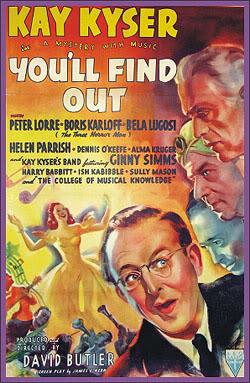 Kimberly Kyser, the daughter of Kay and his wife Georgia Carroll Kyser, graciously introduced the film and stayed for a question and answer session after the film. She was born after the Kysers had retired from show business to Chapel Hill and only dimly realized as a child how famous he had been. But once she and her siblings had been exposed to her father’s films, this was their favorite, as they mimicked the scary sounds of the Sonavox. Kay’s favorite of his own films was Playmates, in which he co-starred with John Barrymore, in the Great Profile’s last film.

The audience at the North Carolina Museum of Art responded with enthusiasm and hilarity to the film, and Ms. Kyser’s anecdotes. Kay loved North Carolina, and often interpolated references into his radio shows, here a question supposedly originates from Chapel Hill, and the back drop is a scene from his alma mater, UNC. Kyser’s astonishing popularity is an important part of North Carolina cultural history. 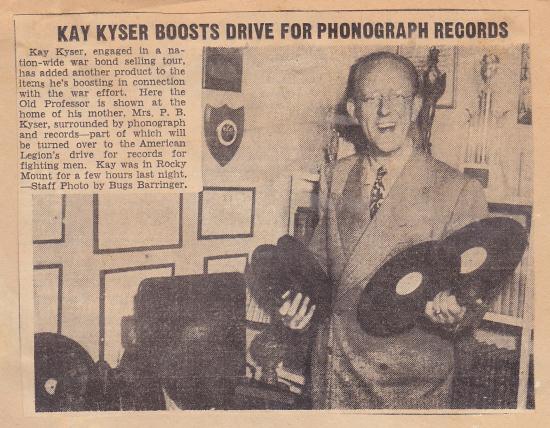 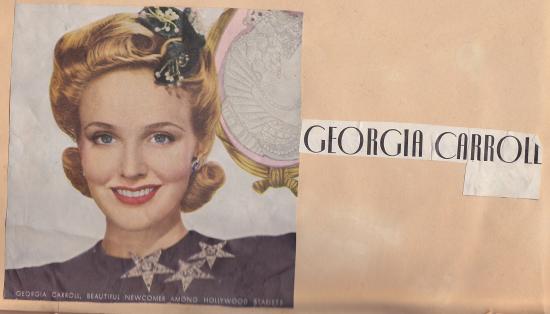 These three images are from various 1940s era scrapbooks 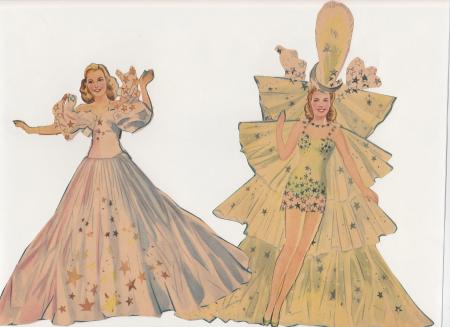 Georgia Carroll was in Ziegfeld Girl; here is her paper doll (right) in costume 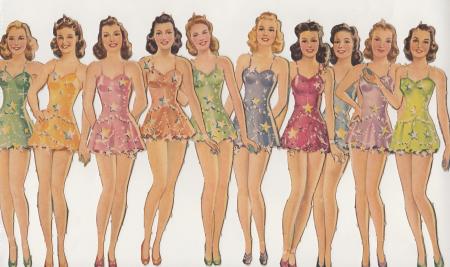 And, in her scanties, center, in green.