The genesis of the James Bond style originated in the films of Alfred Hitchcock, particularly North by Northwest and Notorious.  In fact, Cary Grant was the first choice to play 007. James Bond made his debut with Ian Fleming’s Casino Royale in 1953.  The Ipcress File by Len Deighton was published the same year as Ian Fleming published his 11th Bond novel On Her Majesty’s Secret Service. Rather than a glamorous travelogue, Ipcress portrayed a dreary England, and the unnamed hero is far from the super-agent of the Bond novels. He spends a great deal of his time shuffling papers, not supervillains.  Fleming read Ipcress and poo-pooed “he could not be bothered with all (Deighton’s) kitchen sink writing and all this Nescafé” (McKay 71).

Fleming also probably objected to the fact that Palmer is decidedly working class, as was the actor who would embody him onscreen, Michael Caine.  Fleming was from a wealthy banking family and had been a spy in British Naval Intelligence during WWII. Bond was likewise upper crust. Deighton’s spy had no privileges bestowed by class, no proper school, no old boy network to fall back on.  His cheeky attitude is the polar opposite of Bond’s establishment swank. He spies reluctantly in the film, forced to choose between prison and a “should you choose to accept it” assignment, which became the staple of many film and tv antiheroes.

Even though Ian Fleming lumped Deighton with the “angry young men” of the day, he was not one. “What did I have to be angry about? I had had spent six wonderful years studying art. My RAF time had included a long course in professional photography. My service experience included medical work using a Leica in an RAF hospital operating theatre and after that an assignment to the Fighter School where I spent many happy hours flying in Mosquito fighters operating cine cameras during mock combat. Now I was earning a modest living as an illustrator. London was warming up for the Swinging Sixties and I relished every minute of every day. I still do” (Quote from Rob Mallows: Deighton Dossier) Deighton wrote illustrated cookbooks, including The Action Cookbook: How to Seduce Through Cookery and a comic strip cooking guide—one of his strips can be seen in Harry Palmer’s kitchen in the film.  And, it’s an insert of Len Deighton’s hand cracking Palmer’s eggs. Deighton also wrote military history books and travel guides, for a while, he was the travel editor of Playboy magazine.

The Ipcress File  is exactly 50 years old, and has never gone out of print.  The hero was a direct contrast to both the suave Bond, and the career bureaucrat, George Smiley, who made his debut in John Le Carre’s Call for the Dead the year before.  The unnamed spy was “a bit of a crook by all accounts, rough around the edges, a gourmet, plagued by his toff bosses and always needing his chit signed” (Quote from Rob Mallows: Deighton Dossier) Deighton wrote screenplays for From Russia with Love and Never Say Never Again, and so was not completely out of touch with Bond’s world, although much of his script work for those films never made it to the screen.

The film of The Ipcress File did borrow some old Bond hands, including composer John Barry, Production Designer Ken Adam and Editor Peter Hunt (Britton 127). About 90% of the film was shot on location in London.  Although in the novel, the hero does get out of London, pulling off a Beirut car bombing and witnessing a nuclear test in the South Pacific.  Adam enjoyed designing a film that was the polar opposite of 007’s world.  He didn’t want to make a poor man’s James Bond, but the anti-James Bond, quite different. He was nominated for a British Film Academy Award for both Goldfinger and The Ipcress File, and he won for Ipcress, much to the disgust of Bond co-Producer Cubby Broccoli (Frayling (146). 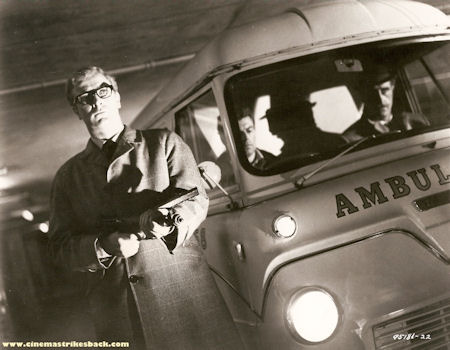 Michael Caine was born Maurice Micklewhite in an impoverished area of South London.  His father hauled boxes of iced fish at Billingsgate Market, and his mother was a charlady. He often spent his school lunch money at the cinema, where he preferred American movies because they were about regular people, and not the upper classes, as British movies often were.  At 18 he was drafted into the army and sent to serve in Korea.  When he returned, he decided to pursue his dream of becoming an actor.  He found a job in a small regional theater, occasionally playing bit parts, but mostly doing just about everything back stage. From time to time, a more experienced player would give him some advice on acting, like it was important not just to say your lines, but to listen to what the other actors were saying.

He was part of a generation of young British actors which included Peter O’ Toole, Richard Harris, Terence Stamp, Albert Finney and Sean Connery, all of whom he knew, and all of whom found success much earlier than he did.  He thought, after a supporting part in Zulu, that his fortune was made, but he was released from the seven year contract he had signed because the producer decided, with his curly blonde hair and long eyelashes, he looked too gay (which he wasn’t) to be a star.

One evening, Caine was having dinner with Terence Stamp. Harry Salzman, one of the producers of the James Bond films, asked Caine over to his table for coffee.  A shrewd businessman, he had acquired the rights of Deighton’s novels, just in case the flashy James Bond style of hero went out of fashion. He praised Caine’s acting in Zulu, and said he thought he was going to be a big star. Caine wrote in his autobiography, Salzman asked him. “Have you read Len Deighton’s Ipcress File?” “Yes,” I said, and it was true—I really was in the middle of it right then.  “Good” said Harry. “Would you like to star in the movie I’m going to make of it?” “Yes,” I said again.” Would you like a seven year contract?” “Yes,” I said…I staggered back to my table in a daze.  “What was that all about?” asked Terry.  “I’ve got a starring role in a movie and a seven year contract.” I said, not believing what I was saying.  “But, you’ve only been gone two minutes!” said Terry. (Caine 64).

Caine spent time with Harry Saltzman at his family home, where a lot of the decisions about The Ipcress File were made.  The unnamed agent was an extremely ordinary person, which was why his enemies underestimated him.  They were looking for a colorless, everyday name, and decided on Harry Palmer.  (Although at one point in the novel the Ipcress narrator says, “Now, my name isn’t Harry, but in this business it’s hard to remember whether it ever had been” Deighton 36) They also decided that Caine would wear his own glasses, and he was more than happy to agree. His friend Sean Connery feared being typecast after his success as James Bond, and Caine thought it was a great idea for his glasses to be the character, not him.  This is decision that is echoed in the present day, as Gary Oldman obsessed about the glasses he would wear as George Smiley in Tinker Tailor, Soldier, Spy.

The filming of The Ipcress File did not go smoothly.  Producer Salzman and director Sidney J. Furie argued a great deal, and disagreements about the script meant that much of the dialogue ended up being ad-libbed, very stressful for Caine.  After the first footage arrived in Hollywood, the filmmakers were told to get rid of Caine’s glasses, and have the girl cook instead of the hero.  Now, the dorky glasses and the metrosexual cooking skills couldn’t be more appealing.

The film greatly improves on the book.  “To watch Michael Caine in the film now is to shake one’s head at what contemporary audiences—expecting a shoot ‘em up, car chase filled epic—thought of his supremely laid back performance, to say nothing of the film itself, in which almost precisely nothing happens” (McKay 71).

After his double whammy of The Ipcress File and womanizing cad in Alfie, Caine became a new “it boy.”  Shirley MacLaine requested him for her leading man in the caper film, Gambit, and Caine journeyed to Hollywood, where all his wildest boyhood fantasies of movie stardom began to come true.

Len Deighton said in a recent interview, “Harry Palmer is a loner in the tradition of heroes of fiction. Michael once summed up the character he was playing ‘Harry Palmer is a winner who comes on like a loser’. As with many of Michael’s verdicts on the world I can’t fault it. Harry Palmer is single-minded while remaining reflective enough to interpret what is going on” (Quote from Rob Mallows: Deighton Dossier).

“There is still a traitor in the organization; but no trips to the Bikini Atoll for our Harry.  No sir.  Instead, he stays firmly in a rather wonderfully filmed London.  We see him in a drab supermarket, in his drab flat, in the drab HQ of the service, at a drab bandstand, in a drab underground garage.  Despite his apparent gourmet credentials, he cooks sultry Sue Lloyd a drab omelet.  It couldn’t be more anti-Bond if it tried.  And, they clearly tried quite hard.” (McKay 71). 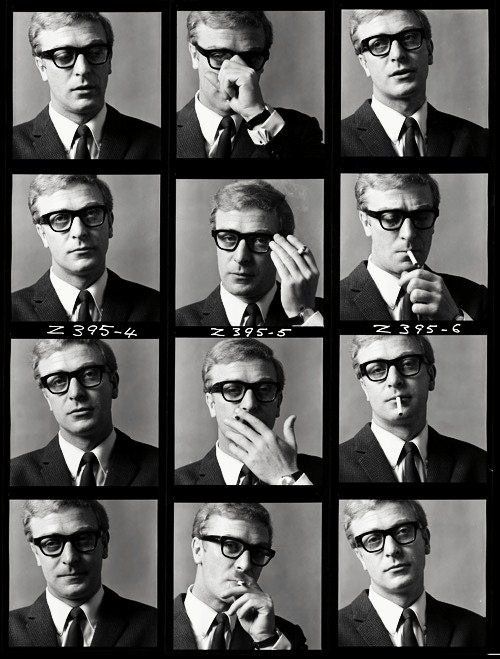 The Elephant to Hollywood by Michael Caine, The Man With the Golden Touch: How the Bond Films Conquered the World by Sinclair McKay, Onscreen and Under Cover: The Ultimate Book of Movie Espionage by Wesley Alan Britton, Ken Adam and the Art of Production Design by Christopher Frayling, Typical Men: The Representation of Masculinity in Popular British Cinema, by Andrew Spicer, Beyond Bond: Spies in Fiction and Film by Wesley A. Britton, website: The Deighton Dossier by Rob Mallows:  http://deightondossier.blogspot.com/2012/03/harry-palmer-is-winner-who-comes-on_27/#more (This link is broken).

Personal note to Rob Mallows:  I tried to contact you three different ways to ask permission to use the quotes from your website (e-mail, blog comment, Facebook) and failed all three times.  If you wish me to remove the quotes, please e-mail me:  Moviediva@ Moviediva.com.