Ragu (Dev Anand) becomes a black market movie ticket entrepreneur, but thirsts for an education and honest employment after meeting college student Alka (Waheeda Rehman). Reformed after an Ooty idyll with her family, he uses nonviolence to convince his kala colleagues to go straight.

Although I’m not a fan of some of Dev’s later films (Jewel Thief the thrilling exception) his film noir period, heavily influenced by his director-actor colleague Guru Dutt, is most appealing. This is the only film in which Dev co-starred with his two brothers, Chetan and Vijay. Kala Bazar begins with spirited montages of footpath poverty, Ragu’s gang and their get rich quick schemes, followed by scenes of a movie premiere, supposedly Mother India (1956), an example of the director’s technique of contrasting realism with fantasy. From a fan level, it’s simply exciting to see so many stars, singers and directors of the 1950s, including Nargis, Nimmi, Guru Dutt, Dilip Kumar, Mehboob Khan, Mohammad Rafi and Lata Mangeskar walk the red carpet in the authentic newsreel footage. And, fascinating to later see the kala bazar touts hustling tickets for Hitchcock’s North by Northwest advertised by a full length portrait of Hitchcock himself.

The melodious S.D. Burman and Shailendra score includes many perennial favorites, “Khoya Khoya Chand” sung by Mohammad Rafi, and “Rimjhim ke Tarane” a rain song duet sung by Rafi and Geeta Dutt. Dev Anand remembered that he, S. D. Burman (Dada) and Shailendra were sitting on Burman’s moonlit terrace. “Suddenly, Dada picked up his harmonium and started playing. Shailendra, who was also present, started singing to the tune. The song was just right for a situation Goldie (Vijay) had conceived for Kala Bazar. The song was “Khoya khoya chand, khula aasman.” There is an element of solitude, romantic solitude as I sing “Khoya Khoya Chand,” while soaking in the sheer beauty and magnitude of the universe. It is a beautiful song, beautifully picturized; a song born of spontaneity and teamwork” (Chowdhury 53).

Another highlight is the jaunty “Sambhalo,” an early Helen number. Helen usually designed her own costumes (as well as choreographing her own dances) and, sadly, this outfit is particularly hideous, with its unflattering draping over the bust, six sparkly straps and multicolored tiered ruffled net skirt over dark leggings. But the swingy energy and humor of the song is beguiling and “The track is sung by the fiery young Asha Bhosle, inflamed with the bongos of Cawas Lord, who discovered Latin percussion when a Spanish dance act visited Bombay in the 1930s; he bought their instruments before they left town and changed the sound of Hindi film music forever” (Fernandes).

Waheeda has never been more beautiful than in this film, and she can tie her seductive silk saris tighter than anyone else. Her heroine, Alka, is not only allowed to fall in love twice, but, as a sensible, educated character, is not asked to sacrifice herself pointlessly for an unworthy man. How refreshing! Dev Anand’s ambiguous hero has unambiguous cool—he wears a bordered paisley scarf with his suit coat to great effect. It’s not surprising that he was imitated for his unique personal style during the 50s and 60s. 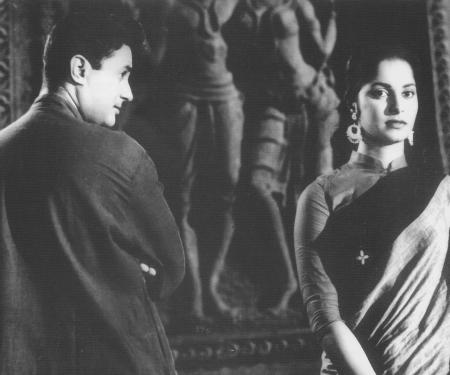 Strongly influenced by Italian neorealism, Kala Bazar’s world view is Indianized with a strong nationalist theme, as Ragu’s satyagraha (non-violence) transforms friends and enemies alike. “Kala Bazar projected the parallel economy of post-Independence India, an economy that had begun to take shape during the hardship-ridden World War II years. Dev Anand epitomized the canny fortune hunters who made a killing during times of shortage and scarcity. His jaunty walk and confident mannerisms were just right in portraying such characters. That is why one filmmaker after another cashed in on this image. It was one the common struggler on the street identified with and even emulated” (Chowdhury 52).

The Anand brothers were sons of a lawyer, and had strong feelings for both natural justice and the rule of law, creating a happy ending somewhat out of sync with Western expectations. But, the conclusion is fitting and believable, as Dev Anand strove with his art to bring cinema “as close as possible to the reading of a newspaper” (Rajadhuaksha 364).

Sources include: Dev Anand: Dashing Debonair by Alpana Chowdhury, the superb liner notes for “Bombshell Baby of Bombay” by Naresh Fernandes and Encyclopedia of Indian Cinema by Rajadhuaksha and Willemen. Photo from Chowdhury)