Mantrap was based on a novel by Sinclair Lewis, relaxing a bit after Main Street, Babbitt and Arrowsmith, and while he was writing Elmer Gantry. Lewis was a very popular author in 1926, and Victor Fleming’s assignment on such a hot property was quite a coup for him as a young director. Lewis called it “a straight, out-and-out romance of an unspoiled country…the most captivating love and adventure story I have ever conceived or told” (Sragow 112) but Fleming saw it as something quite different, a new kind of sex comedy. Like all Lewis’ novels, it incorporated elements of cultural commentary, in this case, that of a “social climber.” “She was bad in the book, but—darn it!—of course, they couldn’t make her than way in the picture. So I played her as a flirt,” Bow said (Sragow 115). Vincent Lawrence, a Broadway playwright, helped structured the script around plot and character development, not just funny titles.

The adaptation is an excellent distillation of the novel, previously serialized in a magazine. Some of the most humorous written passages, which involve the outfitting of two city men at the 1920s version of REI, and being talked into more and more useless gear, is hinted at in a few brief shots in the film. Bow does soften Alverna’s character with her unique snap and sparkle. But, the “love triangle” between the incorrigible flirt, the rough-hewn backwoodsman and the effete lawyer is unusual enough to confound audience expectations, who may not know how they want the story resolved.

This was the film Clara Bow made right before her landmark, It, and it helped create her unique status as the sexpot next door. Bow’s childhood had been impoverished and sordid. She won a Motion Picture magazine “Fame and Fortune Contest” which allowed her to claw her way out of the Brooklyn tenements where she had lived with a sexually abusive father and an insane mother who had tried to murder her. Her private miseries allowed easy access to her volatile emotions and on camera she was a wonder, a star at 16. Paramount ruthlessly exploited her fame, as did her wastrel family and a conniving staff. Her salary was the lowest of any major star and bonuses were put in a trust fund contingent on her adhering to the morals clause in her contract the studio knew she could never fulfill. Richard Griffith called her “the most uneducated aspirant to stardom ever to make the grade, Marilyn Monroe not excepted.” She had no interest in being a phony and had few friends in status-conscious 1920s Hollywood.

Clara Bow was a frisky embodiment of twenties hedonism. Her slight stammer, Brooklyn accent and nerves, coupled with her studio’s cavalier attitude towards her fame would soon take its toll after her talkie debut in The Wild Party. Her friend and secretary, Daisy DeVoe was suspected of embezzling from her, and when taken to court in 1931 retaliated by revealing Bow’s enjoyment of gambling, sex and booze. A moral backlash and her growing mental illness swamped her shaky foray into the talkies and her career evaporated. She married cowboy actor Rex Bell and retired from the screen. Many years later, when her favorite actress, Marilyn Monroe, committed suicide, Bow explained, “A sex symbol is a heavy load to carry when one is tired, hurt and bewildered.”

One of Bow’s cinematographers, Arthur Jacobson said, “She was what we called a free-wheeling actress…the cameramen they put on her pictures got used to her. They knew how to light and how to follow her with the camera, because once she started to play a scene you never knew where she was going to be. No director wanted to hold her down. They let her go! (Sragow 113).

During the film, she became close friends, and then lovers with the director, Victor Fleming, and his adoration of her surely shows on the screen. Bow was not exactly monogamous, and they may or may not have been engaged, but she valued his counsel, telling fan magazine writer Adela Rogers St. John, “…he showed me that life must be lived, not just for the moment, but for the years. He showed me what a future I might have as an actress, because I had made a place for myself that people seemed to want. He was very patient, and he taught me a great deal” (Sragow 114). No man as distinguished as Fleming had ever shown her so much respect, and she responded to it. 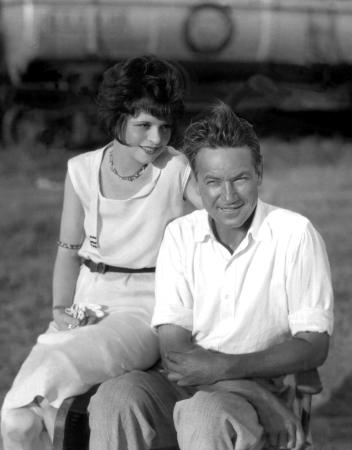 Fleming was almost as famous for his affairs in Hollywood as Bow was. His stepdaughter, Helene Rosson said, “Oh, honey, you name a gal, and he had a thing with her. Women just fell all over themselves to get at him, he was so attractive…” (Stenn 59). Although he had directed 18 films by 1926, none of them were particularly distinguished, his greatest successes, Gone With the Wind and the Wizard of Oz, not to mention other hits like Red Dust, Bombshell (both with Jean Harlow) Captains Courageous and Dr. Jeckyll and Mr. Hyde (both with Spencer Tracy), Treasure Island and Test Pilot, the latter starring Clark Gable, who supposedly modeled his screen persona on the director.

Mantrap was shot on location at Little Bear Lake in the San Bernadino Mountains by James Wong Howe. He was born Wong Tung Jim in Kwantung, China. His father worked on the railroad in Washington state, so he could bring his wife and children to the US. As a young man, Howe became a boxer, when looking for a job in Los Angeles, he stumbled on the Mack Sennett comedy studio shooting on the streets. He encountered a boxer friend there who said he could get a job carrying the heavy motion picture cameras. He was made an assistant and began to learn his craft in the studio of Cecil B. DeMille. He shot his first film in 1922, and became one of Hollywood’s most accomplished cameramen, needless to say, quite unusual for a person of Chinese heritage in that day. 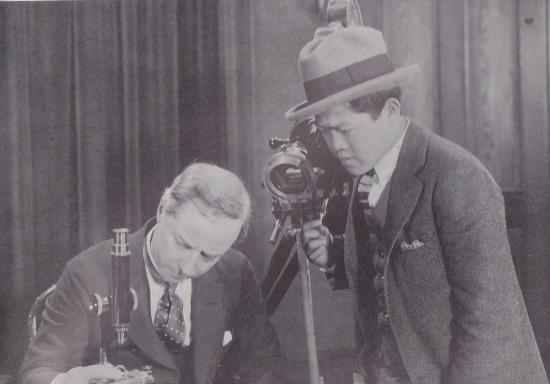 James Wong Howe and Director Herbert Brenon (on the set of Peter Pan).

Percy Marmont is certainly not a very well known name today. But he was a popular romantic leading man who made 87 films, mostly silents, during which he worked with many of the leading ladies of the era. He made his last film in 1968. 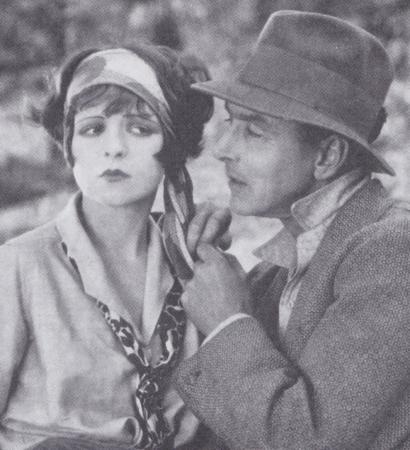 Ernest Torrence was a Scottish born actor who first gained fame as an operatic baritone, a skill not much needed in the silent era. At an imposing 6’ 4” he often played brutal villains, but also their comic variant. He was Captain Hook in the first silent film we ever showed here, Peter Pan, and is best known today as Buster Keaton’s brusque father in Steamboat Bill, Jr.

“Both the slick attorney and the wholesome bumpkin are Silly Putty in this lady’s hand, yet each of these guys could use some kneading” (Sragow 115).

Mantrap was Clara Bow’s favorite of her own movies. On an envelope of photos from the film, Bow wrote to her sons, “From Mantrap—the best silent picture I ever made” (Sragow 115). 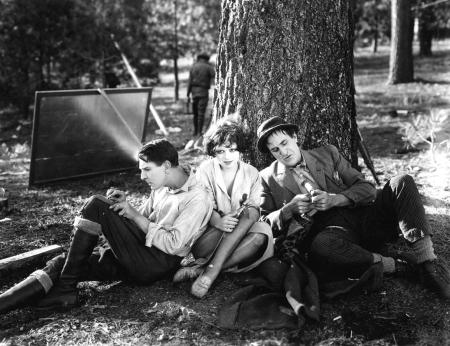