Box factory girl Crawford trades on her allure to sleep her way into Gable’s Manhattan penthouse, but when he runs for governor, her days as his kept woman are numbered. Surprisingly frank about the one commodity beauty has to offer in the Depression marketplace, filming this rags-to-riches saga sparked a torrid affair between the stars. “Their extramarital chemistry amplified the power of Possessed” (Mark A. Viera: Sin in Soft Focus).

As I mentioned at the opening of the Decomania! series, Art Deco is a portmanteau term coined to describe a 1966 Musee des Arts Decoratifs retrospective of the 1925 Paris Exposition, which featured items in an exuberant style encompassing 1920s Modernism, Streamline Moderne, International Style, Bauhaus and Russian Constructivism.  Cinema designers of the 1920s and 30s enthusiastically embraced and popularized these related styles in movies, especially when depicting the wealthy, the corrupt, the cultured, and the glamorous woman of the world.  The middle class still embraced the cosy clutter of Victorian interiors, but the rich endorsed a minimal modern aesthetic, as did the design geniuses of the stage and screen. This film contrasts Marian’s drab factory town with the glittering towers of a gloriously designed urban paradise.  Is it even a choice?

Joan Crawford reinvented herself many times.  Your image of her may be of her big shoulders and big eyebrows from Mildred Pierce, or in thrall to her sister in Whatever Happened to Baby Jane?  Perhaps, Mommie Dearest or the recent Feud: Bette and Joan from Ryan Murphy is what comes to your mind when you think of her pop culture legacy.  But her greatest stardom was built on her image as a young woman surviving, and even thriving in the Depression.  One of my favorite movie star scrapbooks was assembled by “Miss Pauline Pinney of Wichita, Kansas , Sunday afternoon, 2:00 pm, 1933,” which is filled with hand-written notations about her love for her idol, Joan Crawford. 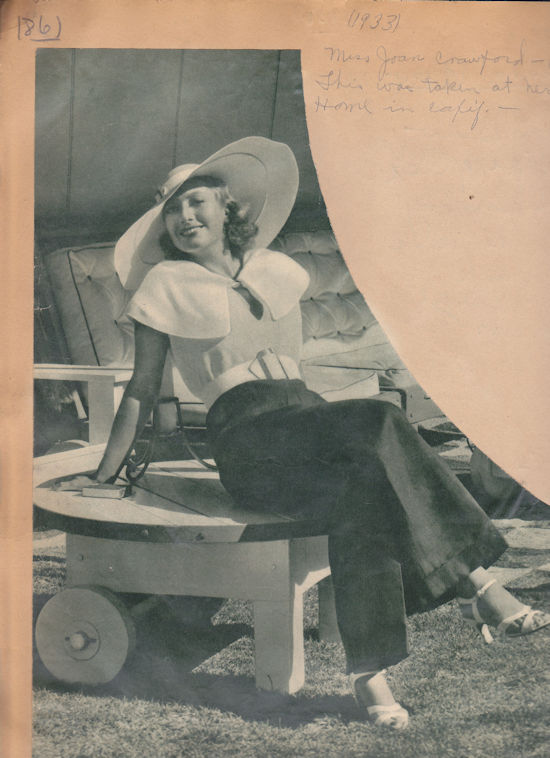 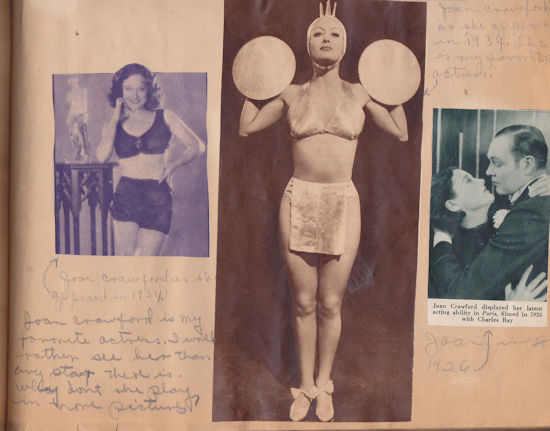 Under the photo on the left Pauline has written,

“Joan Crawford is my favorite actress. I would rather her her than any other star. Why don’t she play in more pictures?

Joan Crawford, like many early stars, rose out of dire poverty, born Lucille Le Sueur in San Antonio Texas.  Her parents may not have been married, but her mother did marry a couple of other ne’er do wells, which changed her daughter’s name, if not her fortune.  Lucille had no more than a 5th grade education.  By day, she worked in her mother’s laundry, at night she danced ceaselessly in Charleston, black bottom and shimmy contests.  Her dancing got her to Broadway, and then to Hollywood at 18 for $75 a week.   MGM changed her name, and cast her often as a heedless flapper in films like Our Dancing Daughters.  When sound came in, the ambitious Crawford retooled her image to fit in with the mood of the Depression, and no film could have spoken to the yearnings of the working girl like Possessed.  Fed up with the dead end of her factory job, Marian yearns for the glamour that the movies provided, a way out of depressing Erie PA.  She watches a “N.Y.C.” train pass by, with all she has been dreaming of.  The passing car widows directly echo the shape of the movie screen, and fantasy contained within, for weary audiences.  “That Crawford herself shared those fantasies. With complete solemnity and no irony, was the bond between her and her audience” (LaSalle 125). Her feminist cri du coeur makes this film completely modern in its yearning for individual freedom outside of rigidly defined class and gender roles.

Crawford’s on screen image was crafted, in a large part, by Adrian, who designed her spectacular costumes, and George Hurrell, the portrait photographer.  She was his favorite subject, and the pictures he took of her in the black gown she wore in this film were used everywhere, in newspapers, fan magazines, posters, postcards and cigarette advertising cards.  “Possessed gave her the template for both a new era and the next phase of her career.  She was the Great Depression’s answer to Mary Magdalene, the working girl who acquires worldly wisdom from publicans and Pharisees, then redeems herself by virtue of her own willpower” (Viera  Hurrell 70). 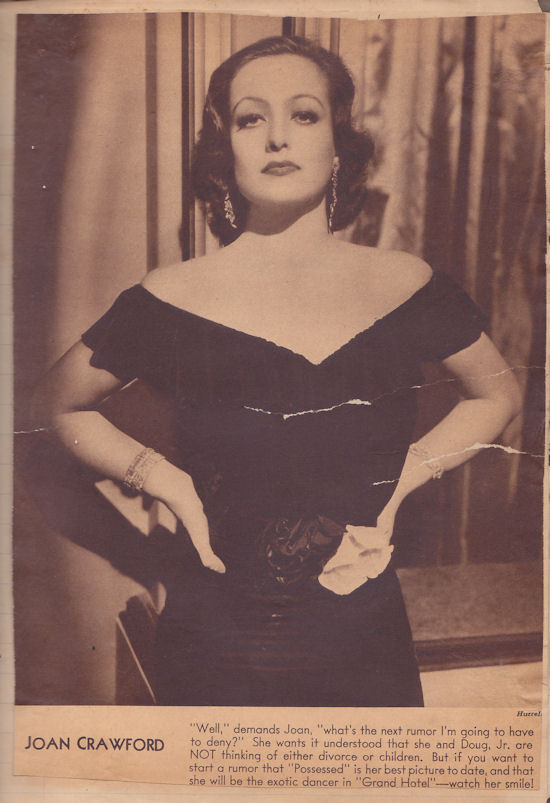 A page from a movie star scrapbook from my collection. Joan was a favorite of scrapbookers. I once found a whole book devoted just to her!

Possessed is a movie about costume.  When we first meet Marion, she’s wearing a faded print dress that reeks of defeat and misery.  As she rises socially, her clothes tell the story, especially with the sleek and simple black evening gown with an off the shoulder neckline and simple flowers at the waist.  She knows exactly how much jewelry is too much for the gentry.  When she reaches for respectability, she wears a mannish trench with asymmetric bow details, another Adrian tour de force of chic and character.  The film was a gigantic hit for MGM, and set Crawford on the path of becoming a huge fashion influence, with Adrian as creator of her powerful star image.  In Modern Screen article about the film’s fashion, Adrian said of her, “She is eager to accept the most chic thing I can give her” (Gutner 112). 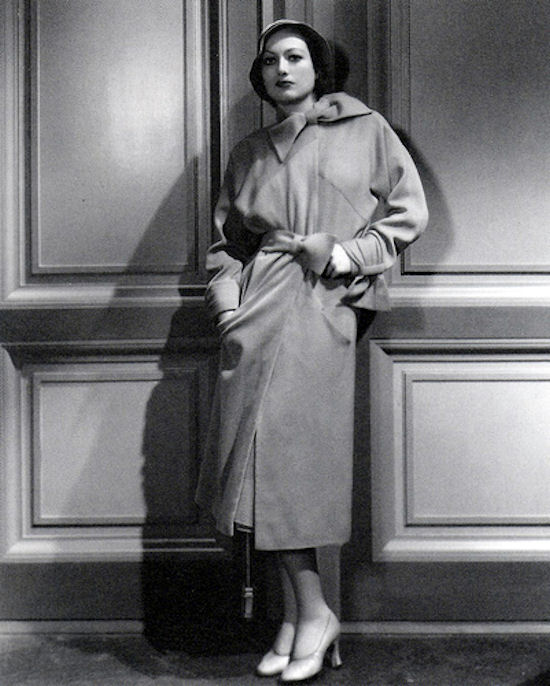 William Clark Gable was born in Cadiz, Ohio, his father was a failed oil prospector, his mother died a few months after he was born.  His closest family relationship was with his stepmother. When he was 17, he saw a road show of Bird of Paradise in Akron OH, an exotic melodrama in which a native island woman, spurned by her white lover, jumps into a raging volcano.  He was hooked.  Unfortunately, his talents took a while to manifest.  He worked a dizzying series of manual labor jobs, alternating with back stage and bit parts all over the country.  Eventually, he was taken under the wing of Josephine Dillion, 14 years his senior, who smoothed away his rough edges and began to promote his stage career.  They were married when his next motherly mentor, Ria Langham, took his theatrical aspirations to a higher level before they, in turn, married. His smash hit role as “Killer” Mears in a prison drama, The Last Mile, brought him to Hollywood.  His big ears and beefy build nearly quashed his film career, but he realized theater was struggling after the crash, and the movies made for a steadier paycheck.  He had a few roles, but then Irving Thalberg at MGM decided Gable would be the next big star, and should be cast opposite all their female powerhouses.  “He was willing to be molded.  He wanted to be a star.  He wanted to be a success” said MGM’s head of publicity (Harris 70).  When he smacked Norma Shearer around in A Free Soul, his career was made. Screenland called him, “a lumberjack in evening clothes, the answer to ten million maidens’ prayers” (LaSalle 80). 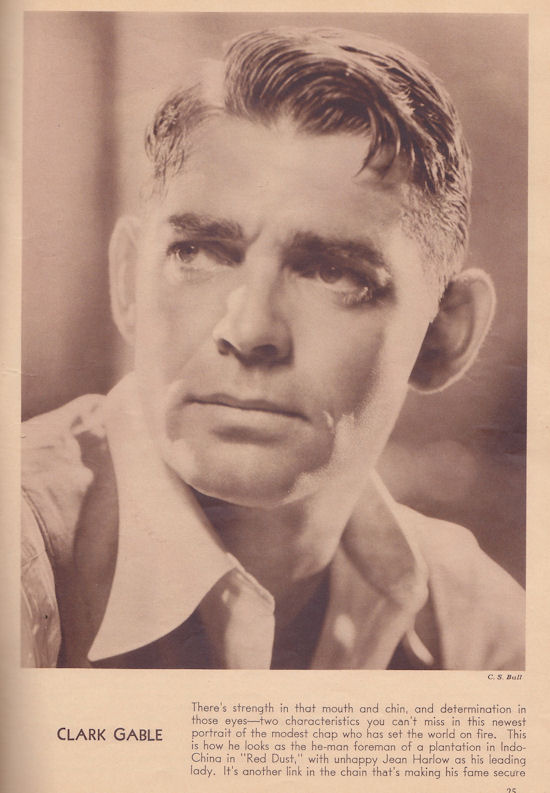 Clarence Brown, who had sensitively directed the star turns of Greta Garbo and Norma Shearer in early talkies, directed Crawford for the first time.  Sound films had imported British and Broadway actors to bring their patrician tones to the screen, Crawford and Gable sounded like many in their audiences, hard scrabble strivers.  Gable appeared rough and brutish, compared to many leading men on screen at the time, but his chemistry with Crawford turned out to be potent, both on and off-screen.  They began a passionate affair which lasted on and off for decades.  They were both married at the time, Joan to Douglas Fairbanks, Jr., three years her junior and Hollywood royalty, Gable still to Ria Langham. They talked about divorcing their spouses and marrying, but feared the passion of their relationship would be endangered by respectability.  They remained friends throughout their lives, and Crawford once confessed, near the end of her life, that Gable had been her great love. 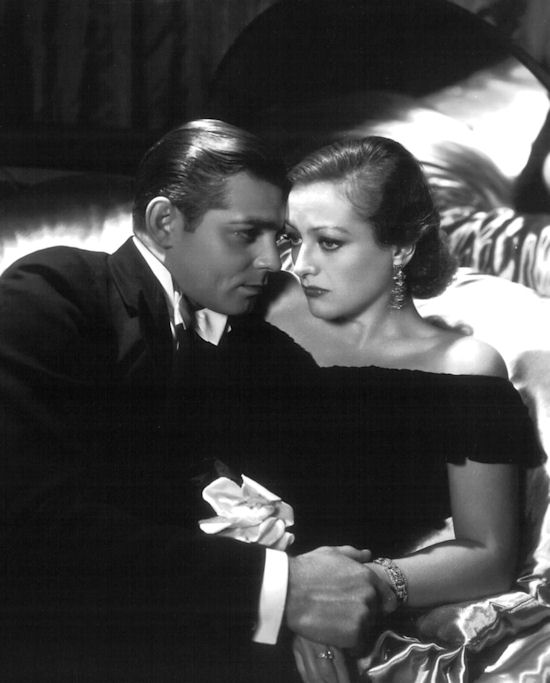 In Possessed, Joan sits at the piano and sings, “How Long Will It Last” “staring at Gable, singing to him and to him only, a he leans against the piano in rapt attention…this wasn’t just good acting—Joan, desperately in love with Gable was herself wondering how long it would last. Joan wasn’t a great singer, but she could certainly put a song over when she really felt it, and she felt it then” (Quirk 57).

When Silver Screen reviewed the film in March, 1932, they said, “Joan Crawford in another of those companionate-marriage pictures.  Clark Gable is the man.  Their arrangement is fine until they fall in love.  The basic incident of the plot actually happened to Grover Cleveland (!) It may not make Gable president, but it will elect Joan and him unanimously to a high place in the screen world.” 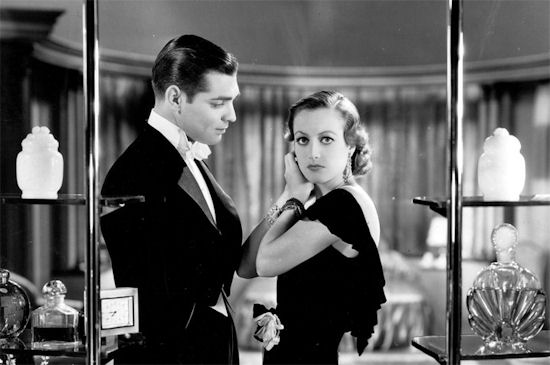 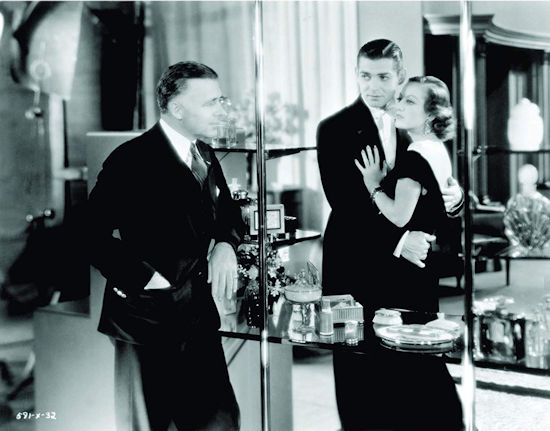 Here is director Clarence Brown with his two stars.

Posessed was the most “brazen” of the fallen women films, because of Crawford’s lack of punishment for her sins.  She was so popular, especially among young women, that her influence was considered to be downright dangerous.  “’You will be interested t hear the comment of two young girls sitting next to me when I previewed the picture’ huffed Mrs. Alonzo Richardson, a member of the Atlanta Board of Review. ‘One said to the other I would live with him, too, under any conditions.’” Another film critic ranted that “school girls and serving maids will pay Metro hundreds of thousands of dollars to watch this film and dream about it for days afterwards” another moral arbiter chided, “Norma Shearer and Joan Crawford introduce our little girls to the’ romance’ of kept women” (Viera Sin p. 55). But, did they fear the lure of illicit sex, or Crawford’s portrayal of feisty indpendence? When she says stubbornly “my life is my own” every woman in the audience thrills to her determination. 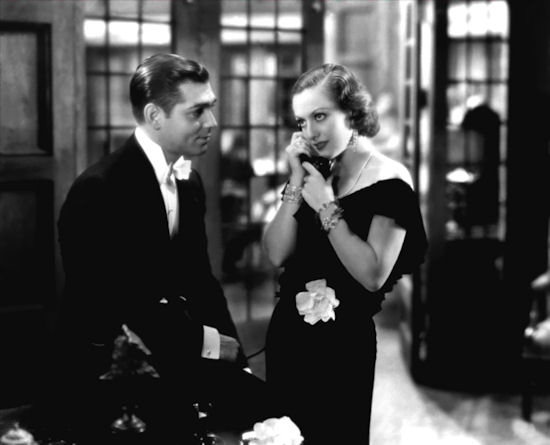