A crumbling California palazzo is haunted by a reclusive silent screen star and her obsequious butler. Joe Gillis, on the lam from the repo man, stumbles in, drawn into a web of egomania, delusion and desire; a former movie siren’s fate riding on 1929 Isotta Fraschini. “The finest movie ever made about the narcissistic hellhole that is Hollywood (BBC).

When people ask me what my favorite movie is, my response is always Sunset Boulevard.  It’s a movie I never get tired of seeing, and one that first captivated me on television, during one of those “Saturday Night at the Movies” shows that my brother and I would stay up late to watch with the babysitter when my parents were out.  The forbidden air of being able to stay up until 11:00 (Kathy did not believe in enforced bedtimes) contributed to my love of many of the 1950s Paramount films that formed the backbone of the series. I love that it’s a movie about the movies, particularly about the silent era, which I was just starting to become passionate about.  I love Gloria Swanson’s over the top performance, contrasted with William Holden’s squirmy tortured one.  As befits the car series, automobiles play a major role: Joe Gillis never would have met Norma Desmond, if the repo men weren’t chasing him for his car, and Norma’s grand limousine gives her a brief moment of entrée back into the Hollywood that had forgotten her. 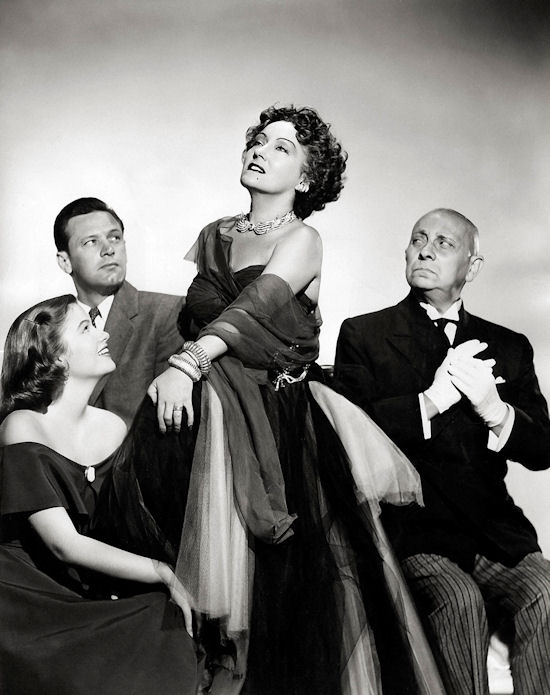 Billy Wilder and Charles Brackett had collaborated on many successful films, like Ninotchka, Ball of Fire and The Lost Weekend, and now they turned to bitter tale of a Hollywood has been.  They had hoped to get Montgomery Clift for Joe Gillis, and for Norma Desmond, they had considered trying to lure Greta Garbo out of retirement, Mae West, Pola Negri, Mary Pickford were also considered.  Wilder and Brackett had spent enough time in the movie capital to have heard many stories, both true and apocryphal, to weave into their script. They knew the lavish style in which the grand old stars lived in their mansions, and inserted bits of legendary hearsay into their tale.

Clift turned down the part, rumor had it because his current lover, a former Broadway and cabaret star named Libby Holman, thought the script was about her.  Years before, her young husband, tobacco heir Zachary Smith Reynolds was mysteriously murdered in their Winston Salem mansion.  Holman thought Sunset Boulevard pointed the finger squarely at her, and Clift bowed out.

By the time the script was (somewhat) ready, only Gloria Swanson was in the running for Norma Desmond.  She had once been Paramount’s biggest star, but even a younger generation who had never seen her films would instantly accept her as a movie queen.  She was not a has-been, however, with a talk show on the new medium of television, and her own dress designing line, Gloria Swanson: Forever Young.  She was a little peeved about being asked to screen test (didn’t the studio know what she could do?) but agreed, and it was immediately clear that she was perfect.  Brackett and Wilder’s script was typically vague and incomplete, only 26 pages were ready when filming began, and rewriting was ongoing.  They knew there would be a murder, but not who murdered whom.  Originally, Norma Desmond was a less sympathetic character, and it seems likely that Swanson herself, a shrewd Hollywood veteran long in charge of her career,  contributed both to her character and her dialogue.  She even did a second screen test to make sure that she and William Holden looked sufficiently apart in age, Swanson was youthful for 50 and Holden already beginning to look a little ragged around the edges at 31. Wilder never gave specific directions to any of his actors, veterans like Swanson and Holden or newcomer Nancy Olson, making only her 2nd film at the age of 20. 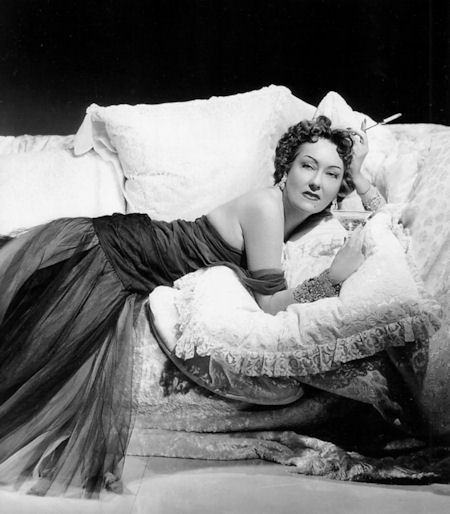 Norma Desmond’s mansion, since torn down, was owned by an ex-wife of J. Paul Getty. The pool, which figures so prominently in the story, had to be built for the film. The 1929 Isotta Fraschini limousine (Von Stroheim did not know how to drive, so it had to be towed) had been a gift from Walter Chrysler to madcap socialite Peggy Hopkins Joyce.

When Swanson arrived on the Paramount set for filming, the old timers all arrived to greet her, a scene subsequently recreated in the film. The silent film you see on screen at her home is the uncompleted Queen Kelly, directed by Erich von Stroheim, who plays Max von Mayerling. It was never released in the US.  Von Stroheim was a famously autocratic director obsessed with detail, and his disregard for studio budgets, and studio moguls, destroyed his career. Swanson, who co-produced Queen Kelly with her lover, Joseph P. Kennedy (yes, father of John, Robert and Edward) owned the rights, so they didn’t have to pay to use the clips and Swanson relished being able to put a few jewel-like scenes from this long ago fiasco on screen.

There are a lot of amazing cameos in Sunset Boulevard, first and foremost, of course, Cecil B. DeMille, playing himself on the set of his epic Samson and Delilah.  He directed many of Swanson’s early hits in the silent era, in which she played saucy, exotic clotheshorses in films like Male and Female, Why Change Your Wife? and Don’t Change Your Husband.  “Young Fellow” was his personal nickname for his greatest star. In Male and Female, she wore a costume made of white peacock feathers, collected from the birds on DeMille’s ranch, and here, Edith Head cannily trims Norma’s  hat with one as a reference to an earlier, iconic costume. 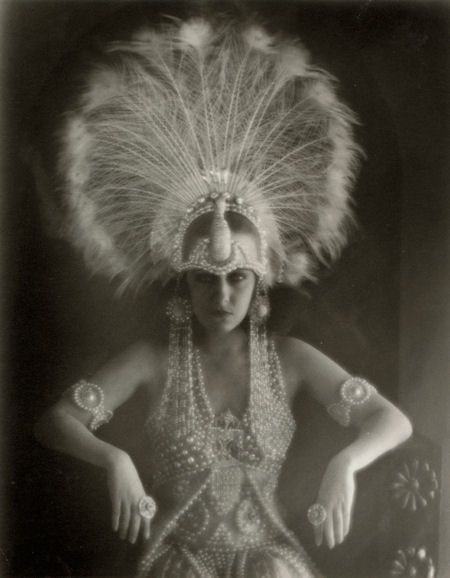 Pearls and white peacock feathers in Male and Female. 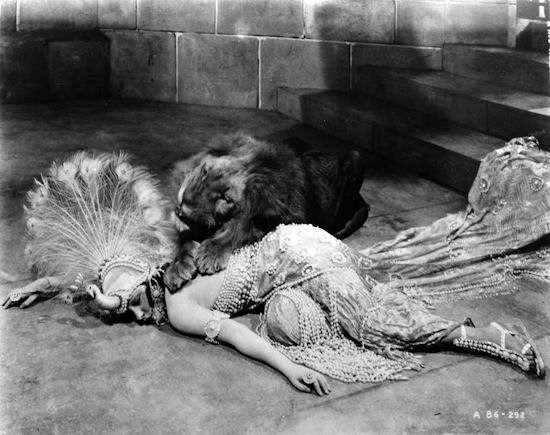 Thrown to the lions. DeMille used a real lion in the film. Gloria stayed perfectly still, and the trainer placed the cat’s paws on her back while she held her breath. DeMille allowed her to choose a trinket from a tray filled with jewellery as a reward for her bravery, and she chose a gold mesh purse with a large square sapphire mounted on it. The lion in this posed still looks a tad fake, but it does look real in the film. 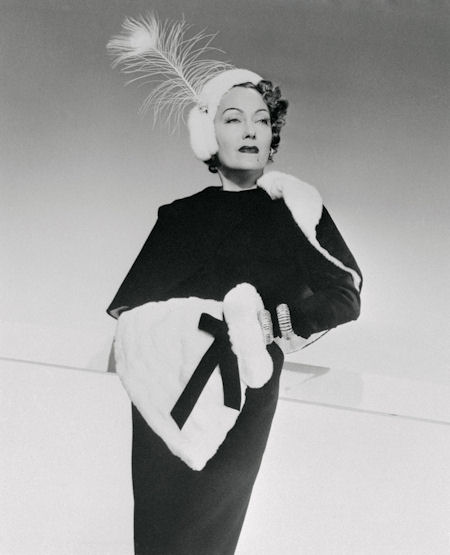 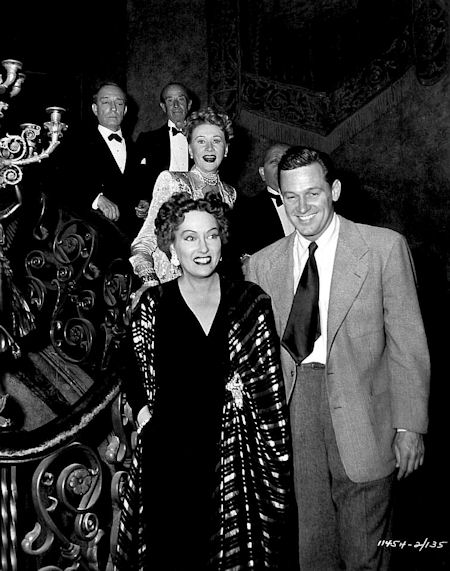 Other cameos include Buster Keaton, Anna Q. Nillson, and H.B. Warner (who played Christ in DeMille’s silent King of Kings). Not pictured here, teens’ cowboy star Franklyn Farnum who appears as the undertaker early on.

The fabulous costumes are one of the reasons I’ve always loved this film, as far as I’m concerned, this is Edith Head’s masterpiece.  The clothes are over the top 1950s New Look, informed by the glittering details of the mad, mad 20s, worn by a wealthy woman who wants to be stylish, without letting go of the glamorous jewels, fabrics and silhouettes of her era as a screen idol.  Head was hired at Paramount in Swanson’s glory days.  As an underling, she had been given roses to toss in admiration as Swanson and her most recent husband, a Marquis, arrived in a leopard upholstered touring car (like Norma Desmond’s) at the studio for a magnificently staged welcome on their return from a Paris honeymoon.  Swanson was herself a designer, and Head worked closely together, because of course the older woman had lived the extravagant life her character was meant to reflect. 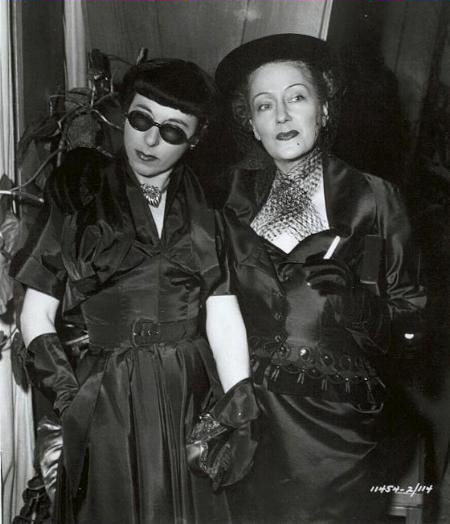 “As inexperienced as I was, I sensed part of what was going on in Sunset Boulevard. Even I realized they might not get away with it, because they were telling the story of how Hollywood makes promises it doesn’t keep.  Hollywood promised young Norma Desmond she would be immortal” Nancy Olson (Stagg 123). 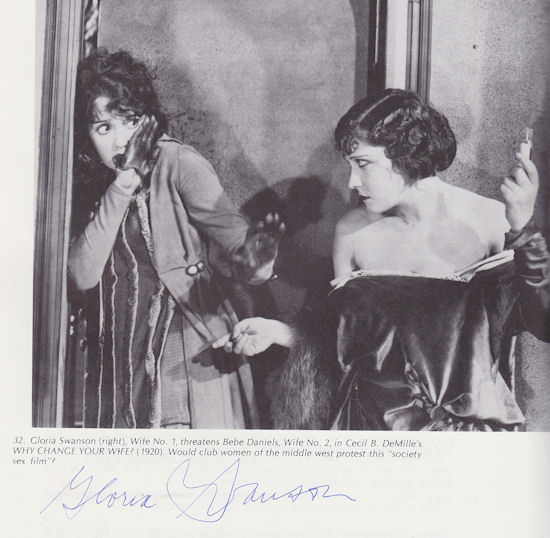 My brother met Gloria Swanson and had her autograph Spellbound in Darkness by George C. Pratt for me. 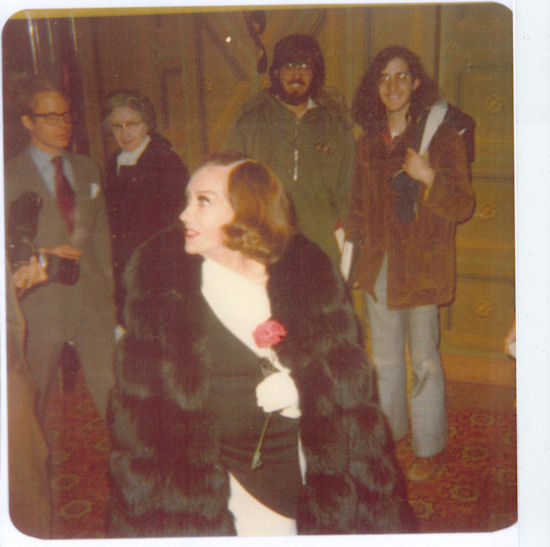 Gloria Swanson, with my brother, David Drazin on the far right, next to his friend, Harold Hirsch, January 1975.

In 1983, I sent away for the auction catalogue of Gloria Swanson’s estate.  Costumes from the film were included (she must have had a clause in her contract that she could buy, or would be gifted them) including the “Salome” scarf from the final scene, valued at $300-$500.  Who bought the scarf and where is it now? 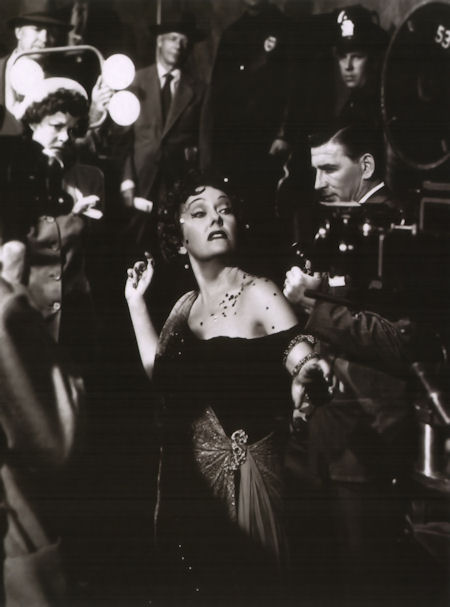 It isn’t hard to find praise and analysis of the film, which won 3 Oscars, for Original Screenplay, Black and White Art Direction and Score.  Swanson was nominated for an Oscar, as was Bette Davis for All About Eve in 1950.  The winner was Judy Holliday, playing a ditsy blonde in Born Yesterday.  Common knowledge said that Davis and Swanson split the vote, and Holliday (who is fantastic) was the winner by default.  Seeing all those films now, it’s hard to believe that the men who ruled Hollywood, and voted for the Oscars, didn’t want to discourage the spectacle of two flamboyant middle aged women with lively sexual appetites and their younger lovers, in favor of a girl who (mostly) knew her place…dim (but wise) arm candy.

Billy Wilder watched it with a reporter for The New Yorker 40 years after he had seen it last, and while initially tense, decided it was pretty good after all. “There’s not much dust on it” he decided.  But, perhaps the film’s most fitting epitaph was pronounced by Mae Murray, a silent screen siren who had been directed by Von Stroheim in The Merry Widow in 1925, and who saw the film at an industry screening in 1950: “None of us floozies was that nuts.” 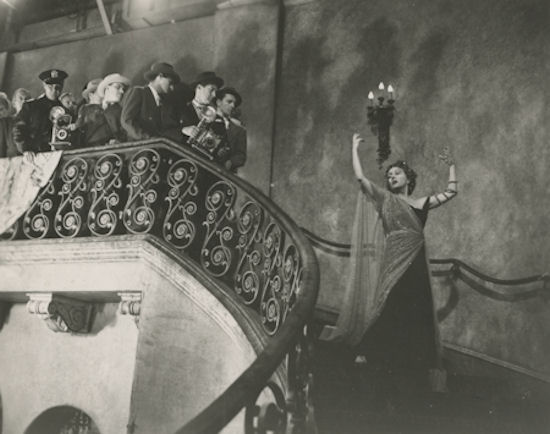 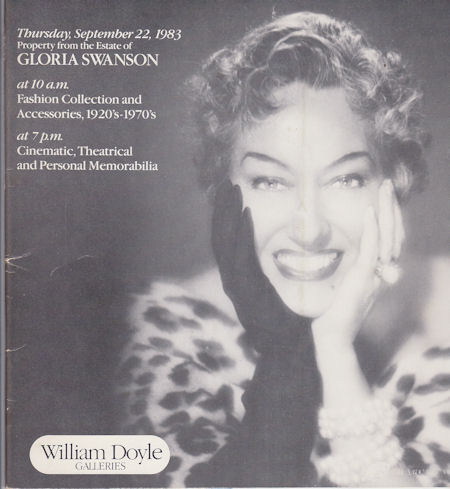