The Wedding March is greatest of von Stroheim’s perverted valentines to old Vienna. The meticulous detail and lovingly observed degeneracy of a ruling class about to be blasted to smithereens obsessed this expatriate son of a Jewish hatter, with an incredible fantasy life and a driving ambition to direct. “It allowed Stroheim to act the role of his dreams: an aristocratic rake in the doomed Pre-War Vienna of his youth. It was his greatest wish fulfillment.” (Arthur Lennig). Nineteen-year old Fay Wray’s favorite role was Mitzi, before she became King Kong’s plaything.

Erich von Stroheim was one of the greatest of the silent era directors, famous for his obsessions, disregard of budget, schedule and running time, and who shot hundreds of hours, take after take, sometimes of subjects so gamey he knew the censors would never permit a fraction of it. His first film, Blind Husbands (1919) was thought by one of his biographers to be “the most impressive and significant film debut in Hollywood history” until Citizen Kane. All films but his masterpiece, Greed, were set in an imaginary Vienna, with “an Erich von Stroheim character” an officer of dangerous sex appeal and the recurring themes of pure and impure love, doppelgangers and youthful and aging members of the decaying order. Stroheim’s downfall was partly due to his own cinematic excesses, but also to his inability to be confined by the ever more powerful studio system. He was not the only maverick to be discarded for his inability to kowtow to the producers. He was a believer in fate. So, there was no other way.

Discharged from the Austrian Army (unfit 4-F) he added the aristocratic “von” to his name at Ellis Island and set about reinventing himself. He fell in with director D. W. Griffith and became his disciple, making his living as an actor before taking up the director’s megaphone. He played many variations on the bestial Hun, “The Man You Love to Hate.” Who could forget The Heart of Humanity, the ripe piece of propaganda in which, distracted by a screaming infant as he tries to rape a Red Cross nurse after tearing at her clothes with his teeth, he plucks the baby from its cradle and throws it out the window? His parts made hm so reviled, he could barely go out in Hollywood without being hissed, a tribute to his acting skill. And, of course he is most remembered for his stunning performance as (of course) “the Erich von Stroheim character” in Billy Wilder’s Sunset Boulevard. He knew immediately that this was how he would be remembered, and groused about “that lousy butler part.”

After Blind Husbands, Foolish Wives and The Merry-Go-Round, Stroheim directed his masterpiece, Greed. He had become consumed by his desire to faithfully render an acurate version of Frank Norris’ realistic turn of the century novel, McTeague. The rough cut supposedly ran 10 hours, and even brutally edited in half, and then in half again, its power was unmistakable, although it was savaged by contemporary critics. MGM then had him direct a silent version of the popular operetta, The Merry Widow. It was a glittering success (and his most profitable film) managing to meld the MGM studio gloss with his own skewed vision. He gave silent diva Mae Murray her greatest role (over her hysterical protests), and also helped cement the romantic image of John Gilbert, soon to be one of MGM’s greatest stars. The studio had been a little confused about the character of old Baron, trembling in the final stage of syphilis, who spent so much time fondling the heroine’s dainty shoes. In one of the great apocryphal Hollywood tales, Irving Thalberg supposedly asked what was going on. “He has a foot fetish” Von helpfully explained. “And you have a footage fetish” Thalberg is said to have retorted. 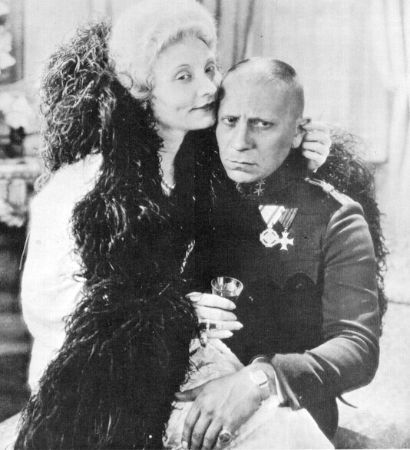 George and Stroheim. Niki’s mother persuades him to marry for money.

His next film was to be the apotheosis of “Old Heidelberg” variations, with himself in the “Erich von Stroheim part.” Once again, a scion of the old aristocracy will become enamored of a chaste and beautiful commoner although his parents warn him he must marry for money. He couldn’t bear the stifling atmosphere at MGM any more, where Greed had been butchered, and the profits he hoped for from the smashing success of The Merry Widow were being charged to Greed‘s losses. There were still plenty of people in Hollywood willing to work with Stroheim, including millionaire Pat Powers, searching for that certain someone to make a star of his mistress, Peggy Hopkins Joyce. Stroheim managed to evade that “honor” but Powers was still willing to finance him in the hopes of a success as glowing as his previous one.

He cast many of the familiar actors who had been in his 1920s films, and himself as the hero, Prince Niki. He then set out to discover a suitable leading lady. Teenaged Fay Wray had been in a few comedies and Westerns when she was brought to his office. He saw in her the emotional accessibility that would allow him to elicit the nuanced performance he demanded. (Like Chaplin, he acted all the roles in his films, and expected the players to imitate him). “As soon as I had seen Fay Wray and spoken with her for a few minutes, I knew I had found the right girl. I didn’t even take a test of her. Why? Because I select my players from a feeling that comes to me when I am with them, a certain sympathy you might call it, or a vibration that exists between us that convinces me they are right. I could not work with a girl who did not have a spiritual qualityFay has spirituality too, but she also has a very real sex appeal that takes hold of the hearts of men.” 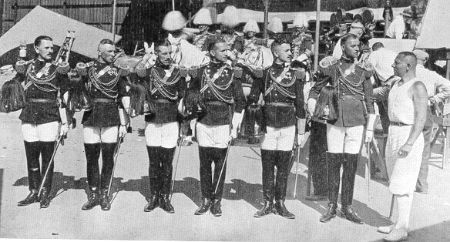 Stroheim directs his military extras in his characteristic sleeveless shirt.

Wray understood that she was participating in a unique enterprise and gave many interviews on her experience with von Stroheimand continues to do so; she just celebrated her 94th birthday. “That first scene (in the wine garden) was photographed just before the dawn came up and naturally, I’d been up all night. But, I just felt good as I was going home in my Hudson early in the morning. I drove with my right hand on the steering wheel, and my left hand holding my forehead. I just felt like I had to hold my head–I was so tired–but at the same time I was so happy, because it was such a beautiful feeling to be in that filmVon Stroheim was highly appreciated by those of us working on the film. He was so meticulous and he was so detailed that every moment had an implicit urgency about it. There was nothing loose or clownish or anything about working with him. Some of the scenes like the ones in the butcher shop were so awful, but so realistic that there was no sense of acting. I didn’t even think about acting–I was just being.”

The Wedding March was the most lavish of his films, even surpassing the million dollar Monte Carlo of Foolish Wives. Weeks were spent filming the elaborate Corpus Christi procession, which included the Emperor Franz-Josef’s real golden carriage, brought to America and photographed in Technicolor. Stroheim, who had a photographic memory for the Vienna of his childhood, may have seen this procession as a boy. When the Emperor’s nephew, the Archduke Leopold visited Paramount, he couldn’t believe his eyes. Richard Day designed 36 sets to recreate Pre-War Vienna, including a wine garden with thousands of wax apple blossoms wired to the tree branches on by one. 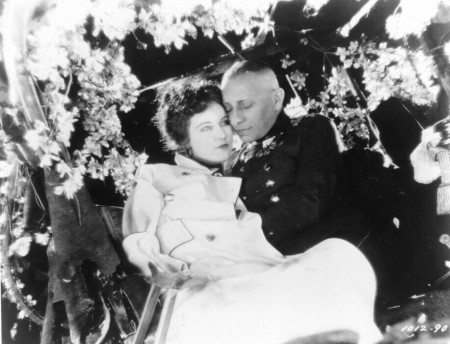 Stroheim shot over 100 reels of film, intending that the film would be edited down to two 8-10 reel features to be shown over two nights. Finally, the plug was pulled, and inevitably his film was turned over to a third party to edit to the studio’s specifications. The first half was released as The Wedding March. The second part, The Honeymoon, was pastiched with a hasty recap of the first film and less than an hour of the second half of the plot and released in Europe. Stroheim strenuously disowned the second half, and for a while there was one print at the Cinematheque Francaise in Paris. Sometimes, it would appear unannounced after The Wedding March was shown. Five days after Stroheim died in 1957, there was a tragic fire at the Cinematheque, and the only print was destroyed. Henri Langlois attributed it to von Stroheim’s vengeful ghost.

The screening at the North Carolina Museum of Art was accompanied by David Drazin. He reconstructed the theme of the film, “Paradise” by J. S. Zamecnik, using one musical line from inside the front cover of the sheet music of Redskin, and a violin part discovered in an antique store. Drazin’s Vienna-flavored score added zest and drama to the screening of this magnificent print from the Library of Congress. The second reel was a bit out of focus (which Drazin said is also true of the Paramount 75th Anniversary video he used to devise his score) but the rest of the print was crisp and beautiful, and includes the Technicolor Corpus Christi procession. 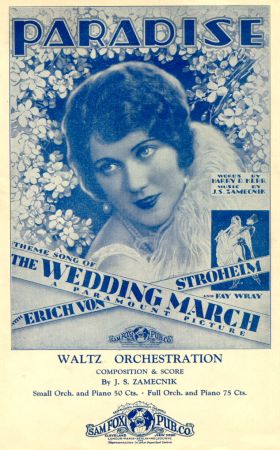 “The living, breathing Erich von Stroheim was so outrageous that only a gifted scenario writer could have invented him, as indeed was the case. The man was a host of contradictions: he played at being a nobleman, yet gave us great insight into the lower classes. He appeared cynical yet showed he was the most dedicated of men. He provided glossy fiction yet depicted a gritty truth. Although he came from the mercantile class, he became the least commercial of directors. Always fascinated by the wheels of fate, he eventually found himself ground up by them. In his films, he fused art and reality, myth and naturalistic detail, love and lust, idealism and cynicism, discipline and unbelievable excess. In the process, he became the legend that he had created: Erich von Stroheim.” –(Arthur Lennig)

(Photo sources: under the apple blossoms, Jerry Ohlinger’s Movie Materials Store; sheet music, collection of David Drazin; Stroheim and Maude George from Finler, Stroheim directing from Curtiss. Sources include, The Man You Loved to Hate by Richard Koszarski, Stroheim by Arthur Lennig, Von Stroheim by Thomas Quinn Curtiss, At the Center of the Frame by William M. Drew, Stroheim by Joel W. Finler. The David Drazin. website has quotes, a list of scores and soundclips).