An expatriate dandy must reclaim his red blooded manhood to defeat a gang of diamond smugglers in the last of Doug’s modern adventures, before becoming a full-time swashbuckler. “Fairbanks is a joy to watch…he is not only embodying the male hero but also laughing joyously at the very ridiculousness of it all” (film historian Janine Basinger) “A peach of a picture” (Variety) Silent film with live music by Maestro David Drazin.

This week, on February 26, 2012, The Artist, a silent film, won the Best Picture Oscar.  Who could have imagined such a thing possible?  Allow me to politely disagree with my colleagues who found the film conventional or nostalgic.  Which commercial filmmaker took a greater aesthetic leap this year? And, has been so richly rewarded for taking a chance on a silent, black and white movie.

Every generation has an image of what makes a “real” man.  In Mad Men, Don Draper has ditched his rural roots, and assumed a new persona as a Manhattan sophisticate.  This is the exact opposite of the ideal espoused in this film, in which an effete “Europeanized” male must revert to the ideals of his frontier forbearers. Fairbanks is known today primarily by the swashbuckling silent classics in which he impersonated the likes of Zorro, Robin Hood and D’Artagnan.  But, his initial movie fame was as a red-blooded, all American modern dress hero in a series of light hearted adventures.  He made feature length comedies before any of the great comedians, like Chaplin, Keaton and Lloyd.  As Jeanine Basinger points out in Silent Stars, “few realize he began as a comedy star, and that it is his comic timing and energy that makes his adventure movies great” (Basinger 99).

Fairbanks comedies were often parodies of popular film genres, in this case the Western, The journey of an effete rich boy who must rediscover his manhood was both a comedy staple (in the films of Buster Keaton and Harold Lloyd) and in dramas, like Moran of the Lady Letty, starring Rudolph Valentino and Tol’able David with Richard Barthlemess.  A “mollycoddle” was a nickname coined by Theodore Roosevelt to describe a pampered, frivolous, rich kid, with the underlying fear that someone uninterested in outdoorsy pursuits might possible be gay. A 1951 issue of Coronet magazine declared an “exhaustive” study indicated “high tension city life” as one of the “chief causes of homosexuality” in modern society (Russo 16). 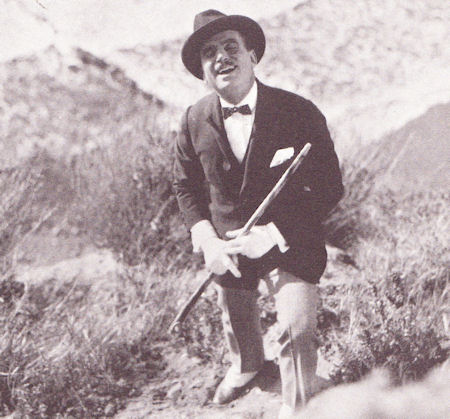 Douglas Fairbanks grew up in Denver, CO in a poverty stricken household.  Not only was his father Jewish, a secret Fairbanks sought to conceal, but was still married to his first wife when Douglas was born. His father was a ne’re do well, and vanished almost for good when his youngest son was five. He did occasionally appear in Fairbanks Broadway years to cage drink money. As a boy, Doug learned his physical exuberance not only brought him the maternal attention he longed for, but relieved his feelings of isolation. Doug joined a touring Shakespearian company when he was 16.  He became a Broadway star, but the movies offered him money that the theater simply could not.  So, even though stage performers looked down on films, he moved to Hollywood. Allan Dwan, who directed many of Fairbanks starring films said, “Pictures were made for him.  The theater was too little” (Vance 23).

Between 1915 and 1920 he starred in 29 movies, and he quickly became a popular star.  His best friend was Charlie Chaplin, one of the few people in the world who could understand the experience of global fame. Fairbanks’ personal wardrobe, tanned skin (he had a dark complexion to begin with) and his way of speaking were imitated by his fans. He popularized the expression “Gee, Whiz!”   He also fell in love with America’s Sweetheart, Mary Pickford, even though they were both married, and they risked their careers by divorcing their spouses so they could be together.  They had a lot in common.  Both their fathers were alcoholics who deserted their families.  They began acting on stage, and then in films first for D. W. Griffith.  On screen, they were young, beautiful and vibrant.  Their unhappy unions were dissolved and they married in a blaze of publicity that had never been experienced by any couple before.  They were like Brad Pitt and Angelina Jolie—but the first one: there had been no couple before them so loved, so emulated, so admired.  Their European honeymoon created celebrity riots the like of which had never been seen before. “Douglas Fairbanks and Mary Pickford came to mean more than a couple of married film stars.  They were a living proof of America’s chronic belief in happy endings” Alistair Cooke wrote (Vance 63). 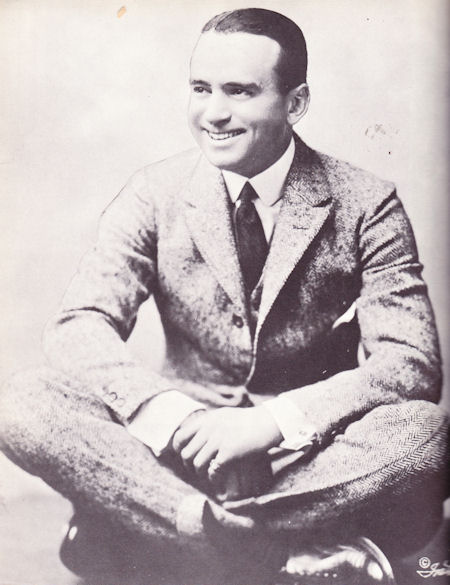 In 1919 Fairbanks, Pickford, Griffith and Chaplin formed United Artists to produce and distribute their own films.  “The inmates have taken charge of the asylum” one of their studio rivals lamented. They exercised complete control over both the business and creative ends of their careers. They were beholden artistically and financially to no one, had a firm grasp both on their own abilities and the demands of their fans and could afford the best collaborators in Hollywood. During the golden days of the silent era, nobody made better pictures or was more successful than Doug and Mary.
Fairbanks’ films often involved dramatic transformations, and none were more so than the way he transformed his own life.  His grace was his films’ best special effect.  Only Keaton was his rival at making the physically arduous look effortless. He “bounded up staircases, swung on ceiling beams, raced up steep slopes, tumbled down ravines, leaped from cliff to tree branch, flew through the air to tackle an enemy, vaulted over rooftops.  Doug could ride a horse, twirl a rope, swim a river, and perform countless other specialized and spectacular skills” (Mast 82). Like any great movie star, he is the only one you want to watch on screen.  “Male stars who have lasted for decades at the box office all had a sense of humor about their images, and have put a touch of irony into their macho heroes (Basinger 101).  Part of the secret of his success was his ability to appeal to the boy lurking inside every grown man.

The Mollycoddle was the last of his comedies released before The Mark of Zorro, the film that completely changed his career (although his swashbucklers would often have characters in which a hero has two identities).  Director Victor Fleming (who later shot The Wizard of Oz and Gone With the Wind) had first been Fairbanks’ cameraman, and was an important contributor to the star’s indelible image as a “cheerful American man of action, deriving mental and physical health from blood, sweat and laughs in the open air” (Sragow 4-5).  Fleming admired Doug’s insistence that movies really move, with “action as the essence of motion pictures” (ibid).

Fleming teamed with screenwriters Anita Loos (author of Gentleman Prefer Blondes) and her husband John Emerson for many of Fairbanks’ comedies, although this one was not written by them, they devised the template.  Fleming remembered, “Fairbanks and I both preferred laughter and fun at any cost.  He was the sort who would play leapfrog over the stuffed furniture in a Broadway hotel lobby and I was likely to join him, although it was never possible for me to jump so high, or to shinny up a polished marble pillar with equal agility” (Sragow 48-9).

The Mollycoddle was originally a serial in the Saturday Evening Post written by Harold McGrath and adapted by Tom Geraghty.  Fairbanks always had a lot of control over his films, and he spent 10 weeks in preproduction.  He cast both Wallace Beery as the villain and a newcomer, Ruth Renick, as his heroine, although the romance was never very important to the plot.  The replica of Monte Carlo in the beginning of the film cost $22,000, and was populated by 300 actors. The complete budget for the film was only $130,000.  Included is an animated sequence, quite unusual for its day. 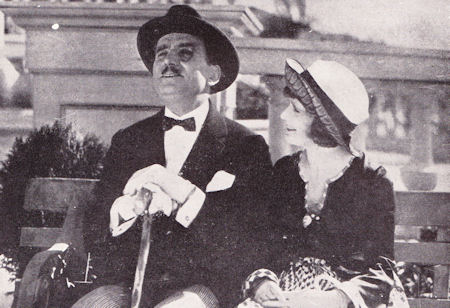 The Arizona location work took two weeks at Polacca, AZ, which was 90 miles from the nearest railway station, so the campout must have been rather rugged.  Fairbanks wanted to film at the Hopi reservation at Polacca.  He filmed several of their ceremonial dances, although they are not incorporated in the finished film.  He promised the tribe a chance to see themselves on screen in return, and after the troupe returned to LA, Fairbanks sent a screen, a generator, a projector and a projectionist back to Polacca.  It was the first time they had ever seen a movie, and some of the individuals shown had died since filming.  Supposedly, a few Hopi took the shadows on the screen for ghosts.

The climactic chase and battle is one of the most difficult Fairbanks ever filmed.  Although he was known for doing all his own stunt work, there is one stunt here that is doubled, in which he leaps from a cliff 15 feet to a tree.  Fairbanks had sprained both his wrists and broken a finger doing another stunt, and in this one instance, a stunt man replaced him.
Because the film was made in 1920, almost a century ago, there are some moments we would consider politically incorrect, but it gives us an opportunity to appreciate the positive changes in our culture. While admiring the spectacular scenery of the Hopi Reservation in Arizona, do take a moment to consider how enlightened Fairbanks team was for his day.  “Doug’s attempt to join an Indian dance may trigger alarms on P.C. meters, but even the orthodox should see that his I’ll try anything attitude is disarmingly democratic” Sragow 84). Part of this may have been Fairbanks’ close friendship with Charles Stevens, supposedly the grandson of Geronimo.  Stevens appears in nearly all his films (sometimes more than once) and here can be seen as Yellow Horse. 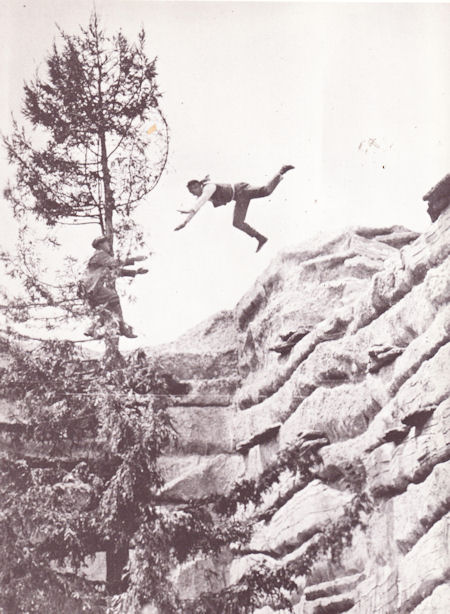 The spectacular stunt filled conclusion was observed by the New York Times reviewer to be without peer.  Fairbanks breezy comedies convey what Graham Greene called “Only the cinema is able in its most fantastic moments to give a sense of absurd, unreasoning happiness, a kind of poignant release:  you can’t catch it in prose” (Sragow 85).

George Valentin, the hero of The Artist, is partly based on Douglas Fairbanks.  Oscar winning actor Jean Dujardin thanked Fairbanks when accepting his Oscar. He is even inserted into a clip of The Mark of Zorro, Fairbanks other big hit of 1920. I’d like to say that I’m psychic, and showing this film this particular week is no accident. Instead, it is a delicious moment of hitting the zeitgeist just right. 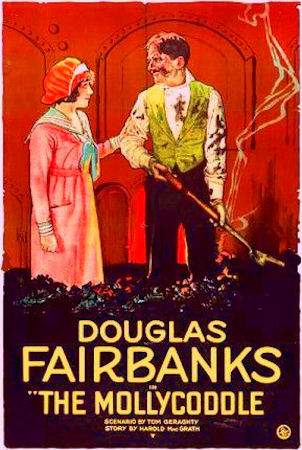