Kewal (Raj Kapoor) chafes under his father’s demands to follow family tradition and become a lawyer. He fails his exams and is thrown out of the house, but luckily finds a patron of the arts, Rajan, (Premnath) who will satisfy his theatrical desires. A childhood romance with a girl named Nimmi haunts his fantasies, and Kewal searches for her in other women, even renaming them after his former sweetheart. With a theater, a play and a feminine image in his mind, he discovers a beauty made homeless by Partition (Nargis) and the play of his dreams can at last be written and performed. The first film Raj Kapoor made as a director is also the first of his great classics co-starring the radiant Nargis.

Raj Kapoor was born into show business. His father, Prithviraj Kapoor, was a famous film and theater actor, and Raj, his oldest son, worked with his father both on stage and behind the scenes. Raj acted in his first film at the age of 11, and worked as an assistant director at several studios. He established his own production company, RK Films, and began his directing career at the tender age of 24, two years younger than the age when Orson Welles directed Citizen Kane (1941).

Nargis made her film debut at the age of 5 as “Baby Rani” and made her first film as a heroine (Taqdeer) at the age of 14 for Mehboob Khan, who directed her in her first big hit, Andaz, and her last, Mother India. After Awara, a landmark hit directed by and starring Raj Kapoor, she worked with him exclusively in a series of popular romances until 1956.

The yearning desire for the victory of art over commerce, and the embodiment of this desire in an object of the hero’s affection, is not an unusual theme for a first film. Details and the atmosphere of the film were intensely personal (even though Raj’s father supported his son’s artistic ambitions). His youngest brother, Shashi, plays him as a child. Even Raj’s Ford, license plate REWA 347, had a role in the film. He said, “I’ll never forget Aag because it was the story of youth consumed by the desire for a brighter and more intense life. And all those who flitted like shadows through my own life, giving something, taking something, were in that film” (Dissanayake). Bunny Reuben observes that Aag was a film that was made mostly by people in their twenties, the cameraman, V.N. Reddy was the oldest at 28 or 29. His work distinguishes Aag from many run of the mill coming of age films by its exceptional cinematography, greatly influenced by Orson Welles’ photographer Gregg Toland, and American film noir. The velvety darkness and piercing light, smoke, steam and intricate shadowy patterns make each perfectly composed shot a pleasure to watch. 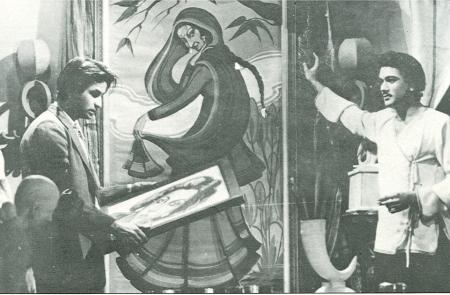 In one sequence, the exquisite Nargis, playing the third Nimmi, electrified by her new-found love for Kewal, dances slowly down a staircase. Her sinuous descent is cross cut with the intense stares of both Kewal and Rajan, who loves her secretly (or not so secretly, since he paints her incessantly). A wordless episode that would not be out of place in a silent film, the movement, music, lighting and facial expressions create a perfect movie moment. The only flaw in the film is a common one: the men don’t really care what Nimmi/Nargis thinks or desires. They have both created their own perfect image of her, which may, or may not, have anything to do with who she really is. This, over time, has become a self-reflective observation, since Raj Kapoor’s unequivocal directorial adoration of Nargis enshrined her as one of the transcendent beauties of world cinema. But, what did she think of him? 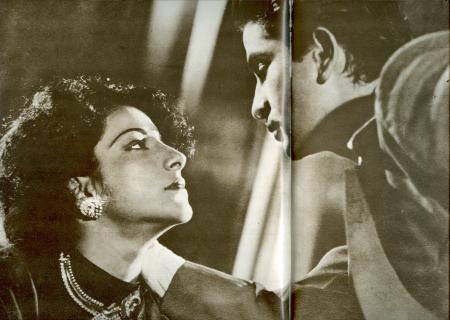 (Sources include: Raj Kapoor’s Films: Harmony of Discourses by Wiman Dissanayake and Malti Sahai, Raj Kapoor: The Fabulous Showman by Bunny Reuben, Bollywood by Tejaswini Ganti, all photos from Reuben). 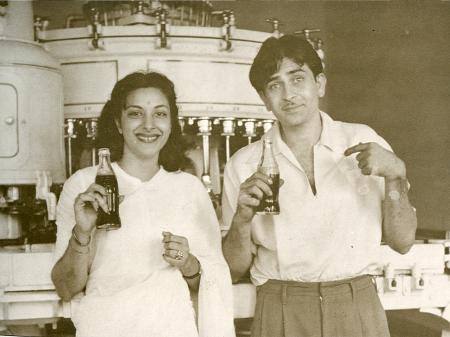 Casual photo of Nargis and Raj Kapoor on the sets, early 1950s