Aan (Pride) is a swashbuckling Arabian Nights style adventure. Dilip Kumar is often pigeonholed as the “Tragedy King” but here is a swaggering hero, Jai, taming wild horses and dueling with swords. The boisterous behavior of both heroines, Nimmi as Jai’s childhood sweetheart, and Nadira (in her debut) as the fiery Rajkumari, keep the action and romance hurtling forward. Premnath’s flamboyant villainy is also a delight. The luxurious costumes are designed in a mid-century Orientalist mood, particularly in the amazing dream sequence, in which handmaidens play huge trumpets which look like they were designed by Dr. Seuss, and Nimmi, swathed in chiffon and dripping with pearls, looks like a goddess. There is a camel stampede, but also motor cars—Premnath drives a swanky Cadillac—is this a modern fantasy?

Director Mehboob Khan was an unabashed admirer of Hollywood films, and Aan evokes a tradition of Hollywood epics, like the silent Ben-Hur. The Adventures of Robin Hood, starring Errol Flynn, seems to inspire the early scenes of a competition for royal favor, as well as the sight of galloping horses splashing through sun dappled waters. William Cameron Menzies’ set designs for Douglas Fairbanks 1924 Thief of Bagdad hover over the exotic interiors, although he never imagined the set of toothy jaws that snap shut as a prison door. Aan seems rather like a 1940s Sheherezadean fantasy, which in Hollywood often starred Maria Montez or Maureen O’Hara as unlikely Arab heroines. A more direct quotation references a confrontation in the Jennifer Jones-Gregory Peck melodrama Duel in the Sun. 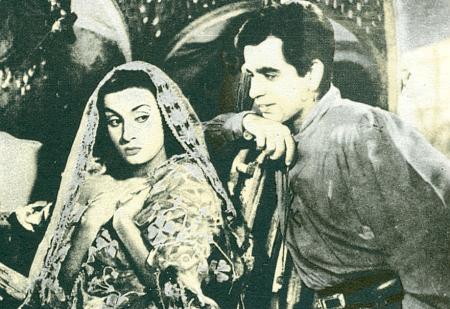 Nimmi and Premnath had been introduced by actor/director Raj Kapoor in Barsaat but Nadira was discovered by director Mehboob Khan. The part of the Rajrumari was intended for Nargis, Mehboob showed her to swoony advantage in Andaz. She could play liberated, Westernized heroines in trousers. But, she was unavailable, since she was now limiting herself to appearances in films starring Raj Kapoor, and instead, Aan was the debut of a sultry Jewish actress of Iraqi descent named Farhat Ezekiel; Mehboob renamed her Nadira. 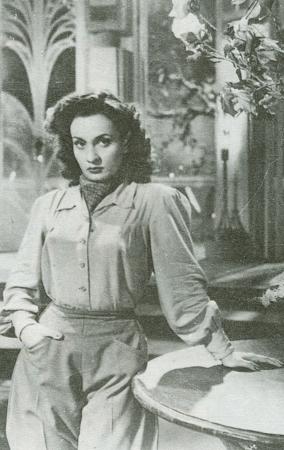 Nadira in her riding togs.

Aan‘s gorgeous cinematography, colored in hues of Gevacolor, was shot in 16mm and then, incredibly, blown up to a stunning 35mm image. When Mehboob Khan began filming Aan in 1949, facilities for processing color film were nonexistent in India. A London Technicolor technician arrived in Bombay to assess the possibilities of processing, but promised nothing. When he returned home, he persuaded the laboratory to undertake the unusual project. The opulent production design by M. R. Achrekar makes each scene change a delight. He and the director sought to invoke the spectacle of Hollywood films, and they wanted a dream sequence even more opulent than Raj Kapoor’s in Awara (does one begin to sense a rivalry here?) Enormous sets were built, and distances traveled for location shooting. Wild animals played supporting roles. Aan was also the first Hindi film to have a fight coordinator for the spectacular action sequences. 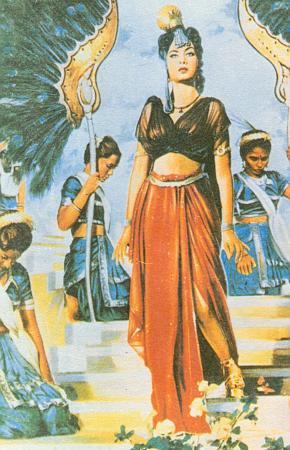 An illustration of the fabulous dream sequence

Aan was released in a shortened English subtitled version called The Savage Princess, the first Indian film to have a wide international release in England the US. There was also a French version, which had distribution in Europe. Cecil B. DeMille, Mehboob Khan’s idol, saw the English version at a private Hollywood screening and sent a letter full of praise, about the film, and Nadira’s wild performance, to the director in India. Surely, 1970s fabulist director Manmohan Desai (Amar, Akbar, Anthony) must have adored the outrageous Aan. 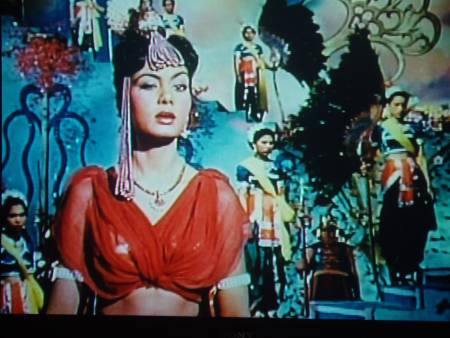 Nimmi and her handmaidens. 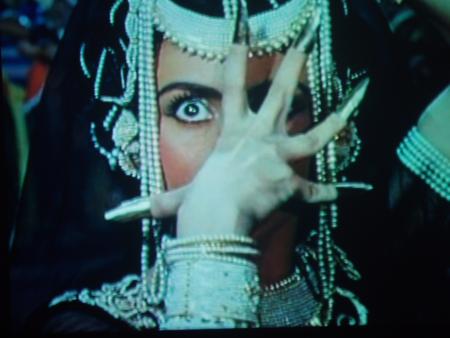 A hint of Nadira’s (sometimes criticized, but not by me) stylized acting

(Sources include Mehboob…India’s DeMille by Bunny Reuben, also the source of the first three images, and Encyclopedia of Indian Cinema by Rajadhaksha and Willemen. Photos off tv screen by Moviediva.