A dizzy blonde movie queen’s life is spinning out of control.  Besieged by a “pack of leeches,” her family and so-called friends, she searches for love in all the wrong places.  Crackerjack Pre-Code wisecracks abound in this fascinating peep inside the MGM dream factory. “Bombshell makes for stellar entertainment. Harlow is glorious in every frame, because she’s so perfectly imperfect: charming, infuriating, delightful, immature, divine, common, childish, glorious, stubborn” (Warner Archive).

Today, we may watch a movie on DVD and immediately watch a “making of” documentary that demystifies the contributions of both actors and crew.  But the 1930s was a different era.  There were no candid photos of sloppily dressed stars returning from the gym, or in transit at an airport.  If a star left the house, he or she was dressed in their star persona.  All publicity was carefully controlled by the studio.

Behind the screen films dated practically from the dawn of cinema.  The peek at the inside story of the dream factory contributed to the mythology of Hollywood, which was a product that could be sold, and was, quite profitably.  No studio controlled the lives of their star properties more rigidly than MGM.  Jean Harlow was a top star, and she was young, only 22 when she made this film.  But she had already seen more than her fair share of scandal and unhappiness.

Bombshell was based on a play by Caroline Francis and Mack Crane, a serious play about a Clara Bow-like star spinning tragically out of control.  Director Victor Fleming had an affair with Bow, while they were filming Mantrap, and knew her well.  Yet, somehow, he decided this material would play better as comedy than tragedy.  It’s a satire, but not a dark or mean spirited one.  He could see the movie star’s dilemma was not that she was cocooned from real life, but that it presses all too close, with her grasping relatives and crooked associates. 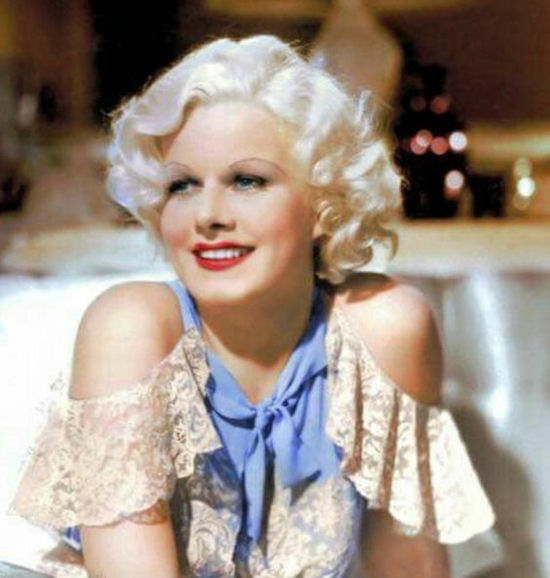 Jean Harlow was a pampered only child from a well-to-do Kansas family. She never knew the poverty and desperation that fueled so many show business careers. Her mother was controlling, and moved the family to Hollywood, hoping to become a movie star, herself, and Jean’s new stepfather was a gangster-ish hanger-on.   Jean married a wealthy young man as a teen, whom she met at a fancy boarding school.  She seemed uninterested in a screen career, but she auditioned on a dare, and started working as an extra.  Howard Hughes cast her to replace his leading lady when the silent aviation drama Hell’s Angels was reshot with sound, and his silent era leading lady’s English was lacking.  Harlow’s career took off after Hughes put her under personal contract. Her hard-boiled delivery was just what the talkies wanted, and her comic gifts, paired with her sultry sexuality, made her a big star.

She divorced her first husband and remarried MGM executive Paul Bern.  During the filming of Red Dust in 1932, Bern either committed suicide, or was murdered by his common law wife, who committed suicide shortly afterwards. He may or may not have left a famous note which said in part, “last night was only a comedy…” The studio was called before the police were notified, and evidence was probably removed and replaced. Protecting a valuable star property was vital and scandals, and even murders, had been covered up in Hollywood before. Harlow was never under suspicion. Shortly after the funeral she went back to work, and Red Dust became one of 1932’s biggest moneymakers. Audiences may have come to search her face for traces of tragedy, but the picture was too good to be only a source of morbid curiosity. For the first time, a star survived a scandal. 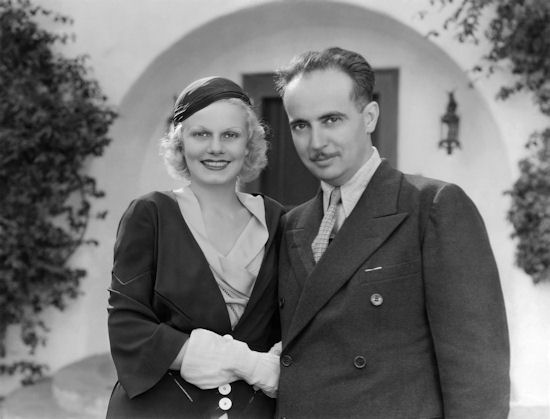 Harlow was nicknamed “The Blonde Bombshell” by the press during her career. But, her family and friends had another nickname for her, “The Baby.” The movie Bombshell is a stew of her life, blended with Clara Bow’s.  As in the film, they both were besieged by hangers on, rapacious family members, false friends, and a studio that exploited her, doing anything for publicity. 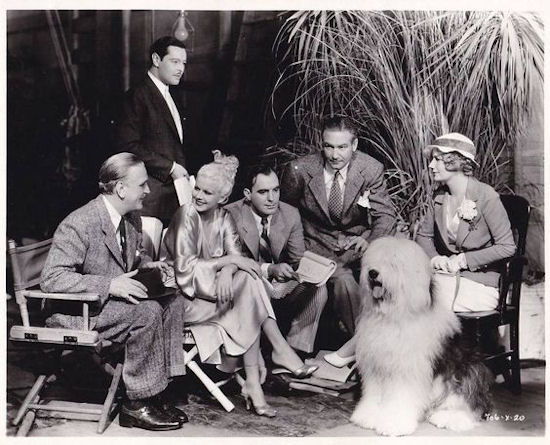 Although Harlow was the victim of much salacious gossip during her career for her uninhibited sexuality, she was regarded with fondness by her co-workers.  She worked hard, making 21 films in the seven years since her talkie debut in Hell’s Angels.  She collapsed on the set of Saratoga, ill with kidney disease.  Although her mother did practice Christian Science, and did not call a doctor, in the days before antibiotics, infections were often fatal.  Only twenty six years old, her funeral was a circus, and after her death, scandal mongering biographies and films shredded her reputation.

One studio insider said of Harlow’s own family, “I felt sorry for the Baby.  All she did was work while her family took her money, just like the girl in the movie.  She would come in at 6:00 am each morning, for makeup and hair and wardrobe and rehearsal, then shoot ‘til dinner or later—and in they’d stroll in the middle of the day, dressed to the nines and riding high.  They were parasites” (Scragow 204).

Lee Tracy, who plays her studio publicist, became famous as the original Hildy Johnson in The Front Page, later gender switched as His Girl Friday.  He often was typecast as newspapermen, or publicists.  His film career came to rather an abrupt halt shortly after Bombshell when he was on location for a Wallace Beery film about the Mexican Revolution called Viva Villa, and he supposedly urinated on a passing military parade from a balcony.  True or not, Hollywood decided his career was not worth salvaging, and they abandoned him.  He had a brief comeback late in his life, as the US President in the stage and film versions of Gore Vidal’s The Best Man. 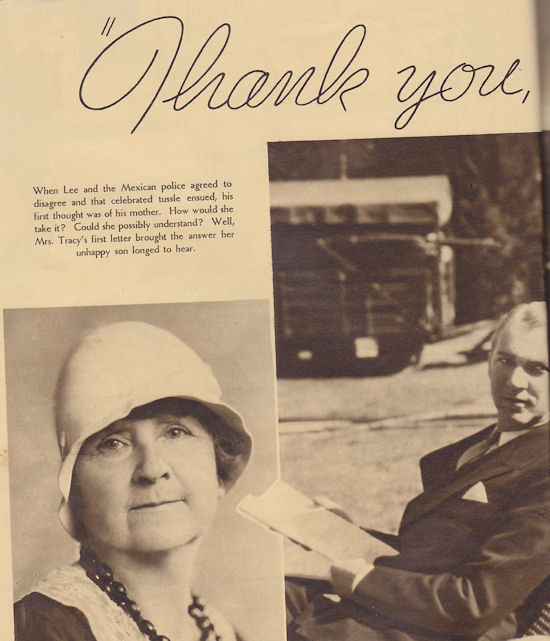 This is from a June, 1933, Modern Screen magazine. Yes, I’m sure when Tracy was arrested, his first thought was of his mother.

Franchot Tone was a popular MGM leading man of the day. Tone came from a wealthy family, and was President of the Drama Club at Cornell. He acted on Broadway and came to Hollywood in 1932. He married MGM star Joan Crawford in 1935, and they acted in seven films together. He often played rich playboys and could be counted on not to overwhelm the leading lady’s charisma. His long career flourish on television in the 1950s and 60s, after his film career waned. The audience at the North Carolina Museum of Art laughed at every single one of his lines. 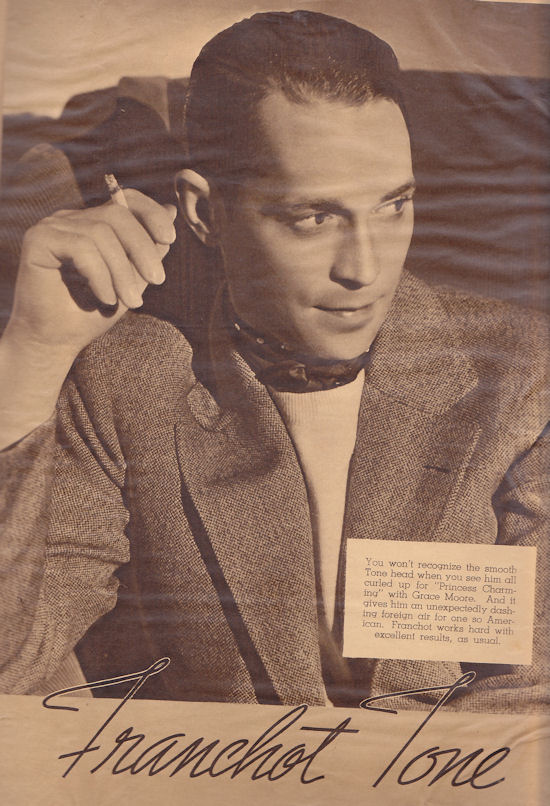 You’ll spot other familiar faces.  Frank Morgan, as Lola’s ne’er do well father is most familiar today as The Wizard of Oz, also directed by Victor Fleming.  His character references Jean’s stepfather, who hounded people at the studio to invest in his shady business plans.  Her brother is played by Ted Healy, who had just broken with his act, Ted Healy and his Three Stooges.  The Stooges continued on for decades, as Healy’s career fizzled.

Pat O’Brien, one of those actors who had a long career for no good reason that I can see, actually took Lee Tracy’s role as Hildy Johnson when The Front Page was filmed.  There must have been a bit of real life tension, there.  O’Brien plays director Fleming’s surrogate, the “man’s man” that he thinks Lola needs.  Here, Harlow’s character does retakes from a famous scene in Red Dust, referencing not just this steamy hit film, but her own personal scandal.  Red Dust was also directed by Victor Fleming, and the first scene he shot after her husband’s death was a retake of the rain barrel scene.  How could Fleming have made her relive such a personal trauma as a comedy?  Audience members knew only that Bern had died during the filming of Red Dust, and must have thought “how juicy” (as we would say, “how meta”) but this edges into weird territory.

Louise Beavers plays her maid, and yes, it’s a stereotyped role.  But, is it?  They allude to her racy private life in a way that would certainly be forbidden once the Production Code was enforced. Beavers was born in Cincinnati, Ohio, and her Southern accent was an act. She has 166 acting credits on the IMDb, but surely her finest hour was in Imitation of Life (1934) in which she plays a single mother whose daughter breaks her heart by passing as white. Many thought she was robbed of an Oscar nomination by her race. 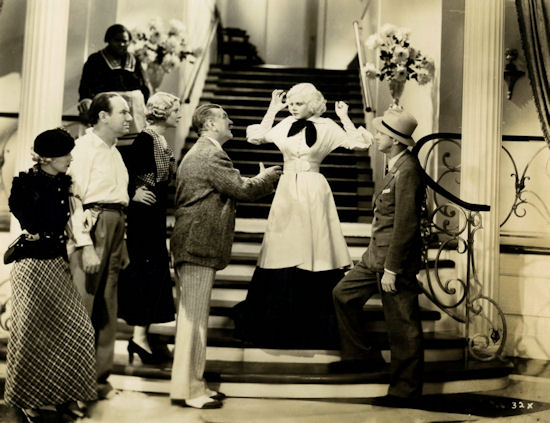 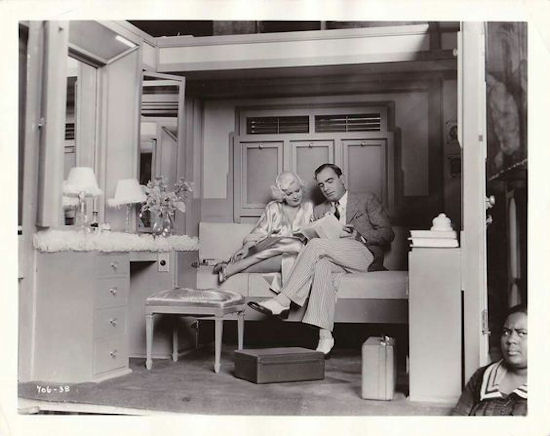 Harolw and O’Brien on the set. Louise Beavers was giving the stink eye to somebody!

Harlow’s gowns are by MGM’s head designer, Gilbert Adrian.  For all the books written about him, and about Hollywood costume in general, nobody pays much attention to this film.  Harlow hated underwear, which will be obvious here.  After the Production Code was enforced, there would be “no breast movement” allowed, obviously inhibiting her personal style.  The clothes here are played for comedy, a few too many ruffles, too big of a bow, an outsize picture hat.  It’s a skilled designer who can mock high Hollywood style the way Adrian does here. 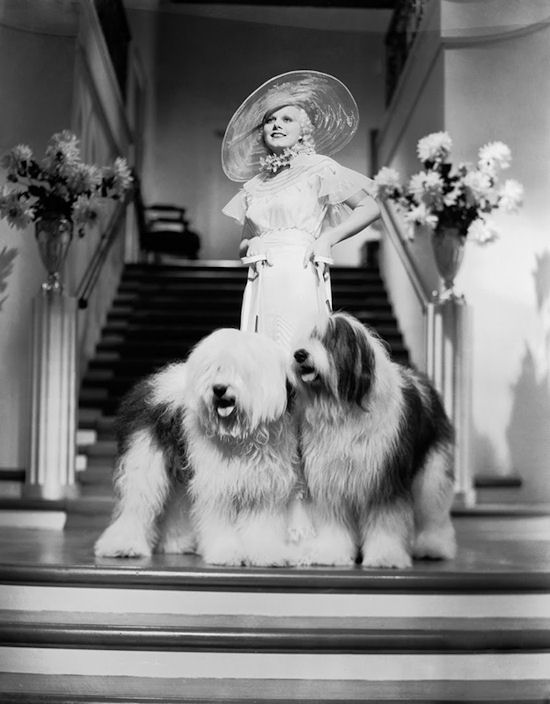 The most fascinating aspect of this film is the glimpse backstage at MGM.  You see the dressing rooms and the sound stages, and perhaps there is a bit of authenticity to the preparations for going before the camera.  You also see several Los Angeles hotels, including The Ambassador, the Huntington and the Beverly Hills, as wells as some location work in Tucson.  There is also a subplot where Lola Burns impulsively decides to adopt a baby.  Adoption could be a fraught subject in a day when an unwed mother was a shame, and in Hollywood, a career-ending scandal.  Pregnant actresses would occasionally disappear for a lengthy vacation, and then adopt a baby from an orphanage, a baby that was in fact their own, hinted at here by one of the reporters. 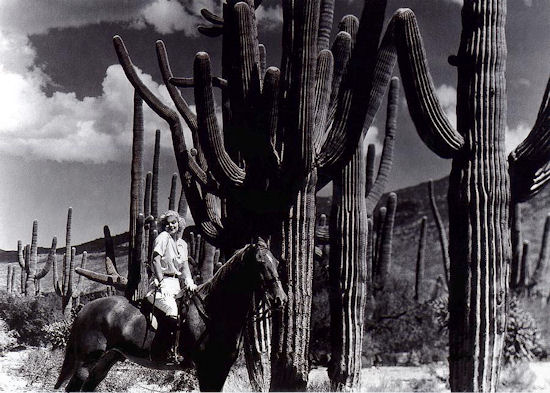 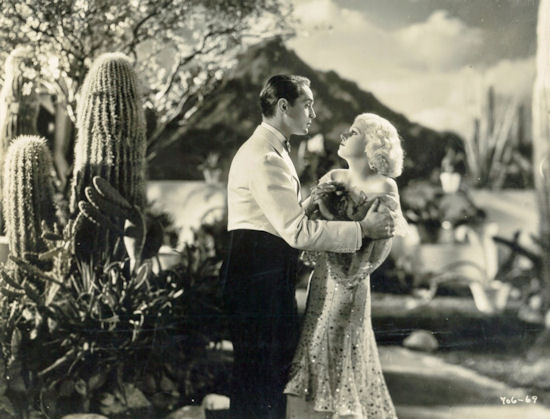 In 1989, the editor of the film, Margaret Booth, said that in 1933, MGM thought the film was “a dud.  People didn’t appreciate it like we do now.  It’s more of a hit today” (Sragow 209).  People didn’t necessarily want to see the inside of the dream factory.  But, its influence stretched far, Gene Kelly and his screenwriters, Betty Comden and Adolph Green, watched it before they penned Singin’ in the Rain.

Harlow’s hard boiled sassy persona was perfect for the talkies.  In her best roles, she’s sexy, but in a casual, self-possessed kind of way.  “Today, her image in studio stills conjures up the whole era, or at least the era’s daydream:  the white marcelled hair, the penciled eyebrows, the clinging silk gown—a vision at once tacky and awesome” (Harvey 98).