A champion driver tries to keep his kid brother away from fast cars and fast women.  Penned by the scribes who wrote Cagney’s Public Enemy, and directed by Scarface’s Howard Hawks, 1930 Indy 500 winner Billy Arnold is in the driver’s seat for the thrilling action and fiery crashes.  “This is no movie for weak-hearted people” (New York Graphic).

Howard Hawks loved fast cars (he also flew planes and raced speedboats) and after the success of Scarface, he was looking for a story that would allow him to portray his need for speed.  The story would be an early incarnation of a plot that would fascinate him throughout his career, the way a woman can disrupt a close male friendship. His story collaboration with Seton Miller would be the last of eight films together.  To turn it into a screenplay, Kubec Glasmon and John Bright were recruited.  They had written Cagney’s last four films, including the electric The Public Enemy which had made him a sensation.

Hawks, cameraman Hans F. Koenekamp, and Glasmon and Bright departed for Indianapolis to soak up some racing atmosphere, shoot some background racing footage, and meet some drivers.  In Indianapolis, Glasmon and Bright stayed at a rundown hotel they called the “Hotel Cesspool” with the drivers, while the director stayed at the mansion of Fred Dusenberg, one of two Dusenberg brothers, makers of the sleek luxury automobile, convincing Fred to loan Dusenberg racing cars for the film, and adding a new Dusenberg for himself in exchange for the product placement. 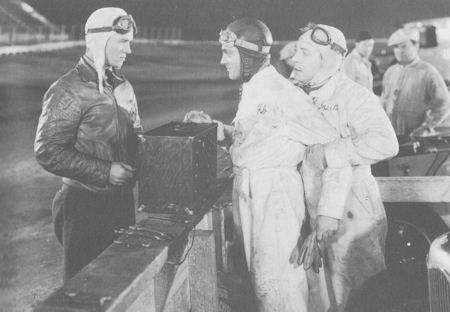 Producer Darryl Zanuck dictated a nine page letter, incorporating everyone’s best story ideas into a single document that became the basis for the screenplay.  He commented that the story “may be lacking in plot twists, such twists are not essential with so colorful a background and such a sound foundation for a dramatic, human story” (McCarthy 159). The writer Niven Busch was brought in to add dialogue, although Cagney changed some of his dialogue himself, always to the film’s betterment.  And, it must be said that this film set an amazing precedent.  Le Mans, Grand Prix, Days of Thunder Talladega Nights: The Ballad of Ricky Bobby and who knows how many other racing films have pretty much the exact same plot as The Crowd Roars. There had been some racing films in the silent era, often starring Wallace Reid.  But this was the first time in a sound film that you could hear the thundering roar of the raceway. 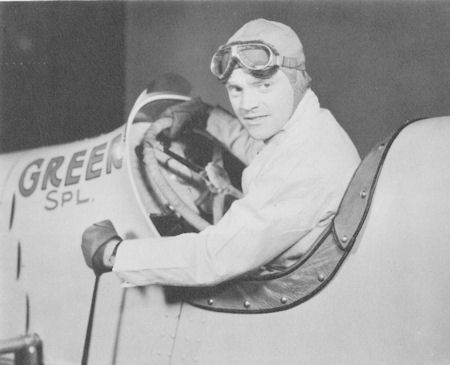 Filming began at Ascot Motor Speedway, known as the “killer track” because 24 drivers had died racing there, more than any other race track in America.  The film crew raced safely, however, except for an accident that injured a driver during a roll over.

At first, Dorothy Mackaill was cast as Lee, Cagney’s girlfriend, with Ann Dvorak as the seductive Anne.  Just before shooting, Hawks substituted Joan Blondell, who had costarred often with Cagney, as Lee.  Once they started in, “Blondell announced, ‘I can’t play a neurotic’ and Dvorak decided, ‘I can’t play an ingenue’ and with Hawk’s agreement, they swapped roles without even telling the studio” (McCarthy 161).

Hawks shot 6 days a week through December of 1931 and January of 1932, with only Christmas and New Year’s Day off.  Twenty six days of filming was languid for a WB film of those days.  He really enjoyed the filming process, and he recruited professional racers, including 1930 Indy winner Billy Arnold to appear, and to design the stunt driving sequences.  (Arnold plays a character called Bill, who talks to Cagney in the pits before a race). The Dusenberg brothers were on the set to see what was being done with their race cars.  One of them designed a special tow bar to release a car going 120 mph for a specific moment in the action, and clouds of smoke and rivers of fire were designed for thrills, although, amazingly, nobody was hurt during those stunts.  At one shocking moment in the film, several women in the opening night press screening allegedly became hysterical.

The director also loved working with Cagney, because he always came up with surprising bits of business on the set.  He had “these funny little attitudes, you know, the way he held his hands and things like that…Jim Cagney worked with movement.  He didn’t work with lines.  I don’t remember him even suggesting a line—it’s the way he does a line, the stuff you feed him that makes him so good” (McBride 54). The weak point of the film is how bland his brother, played by Eric Linden is, he doesn’t seem much of a rival for the dynamic Cagney.  And, of course these days, we don’t care to watch strong women sit around and whine.

James Cagney was the real deal, he projected heightened facets of his own personality in his most famous screen roles. He had grown up in Yorkville, a poor NYC neighborhood, a tough and wily street brawler. One close boyhood friend died in the electric chair for murdering a cop, and plenty of his other pals ended up in Sing-Sing. He was serious about his craft, insisting on the best possible scripts, while threatening to quit the movies, which he did periodically. He was a founding member of the Screen Actor’s Guild, which demanded perks for actors like quitting time.

Cagney was married for 64 years to the vaudeville partner he wed in 1922. He hated romantic scenes. He wouldn’t even kiss an actress on the mouth if he didn’t like her; in at least one film, the final clinch ends with Cagney kissing his leading lady chastely on the forehead. But, Blondell and Cagney were lifelong pals, they met at a play audition for Maggie the Magnificent in 1929. 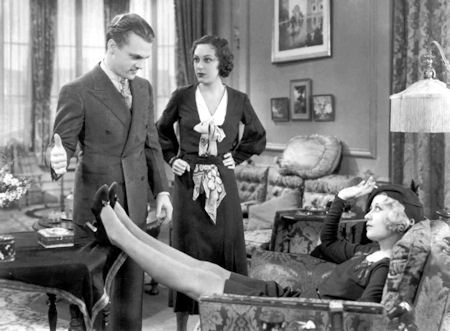 Joan Blondell was born in a New York City hotel room, while her father played a vaudeville matinee. Her cradle was a trunk, her nursery a dressing room, and her baby sitters fellow performers. Her father had a successful comedy act he played all over the world, co-starring his family, including Joan who debuted as”Baby Rosebud” when a toddler, her youth was spent in perpetual touring with Ed Blondell and Company. The family fortunes declined with vaudeville, and there were some desperate times. Joan went to school a week here and there during the tours, when the truant officers insisted. At 17, she won the title “Miss Dallas” on a stop-over. After the family spent the $2000 prize money she won, they were destitute. 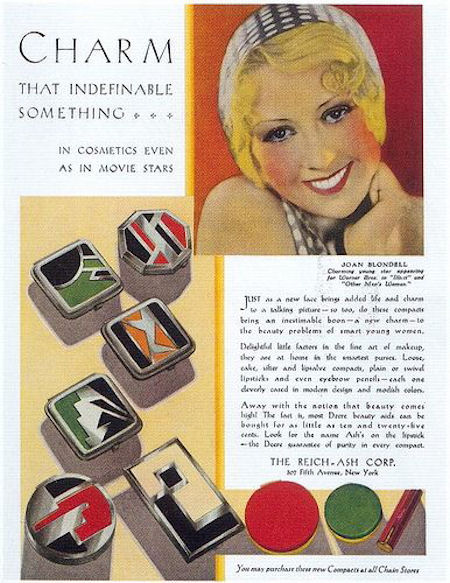 She left the family act for a small part in a Broadway play, the aforementioned  Maggie the Magnificent. It only lasted 32 performances (opening the week of the stock market crash) but director William Keighley asked for both Cagney and Blondell in his new play, Penny Arcade. This play’s run was even shorter, only 24 shows, but Al Jolson saw the play, bought the rights for Hollywood and insisted the two actors were part of the deal, and they arrived at Warners together. A couple of–at the time–more well known actors, Grant Withers and Evelyn Knapp, were given the parts Blondell and Cagney played on stage. But, when the execs viewed the rushes, it was clear that the newcomers needed to be put under contract, pronto. The studio lobbied to change Blondell’s name to Inez Holmes, but she refused, trembling that her small rebellion would lose the chance at a five year contract. 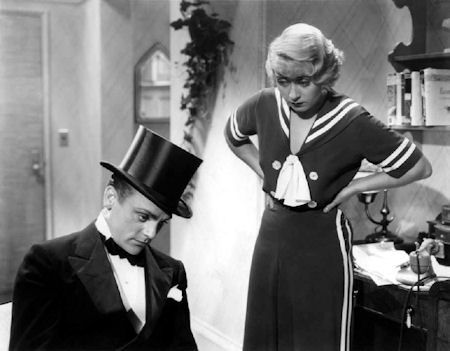 Everyone at Warners worked hard, in the early 1930s Blondell made 27 films in 30 months, as many as Greta Garbo made in her entire career. She was known as “one take Blondell” which stood her in good stead as she toiled in the Warners factory, “They’d even pan me going to the ladies’ room,” she said. The wise cracking babe was her specialty. She made seven movies with Cagney, and 10 with Dick Powell, who she married in 1936. “We both knew what “camp” was. We had a sense of humor; we needed it too, to play some of the roles we were given. We’d been doing the same sort of films for so long that we used to change our lines around or add to them, ad-lib during filming, and nobody would be any the wiser.” (Kobel).

Ann Dvorak was born Annabelle McKim in New York City. Her father was a silent film director and Biograph Studio manager, when D.W. Griffith was making movies on 14th Street. Her mother acted in silent films. She left school at 15 to become a chorus girl at the Pom Pom Club in LA, and then was a chorine in 20 films in 1929-31. Her first important role was in Howard Hawks’ Scarface. She was smoldering and sexy as the kid sister for whom Paul Muni had a more than brotherly concern. She was under personal contract to Howard Hughes at the time, and she had a brief affair with him.

Warner Brothers bought out her contract and gave her all the studio’s best roles, in The Crowd Roars, an unwed mother in theStrange Love of Molly Louvain and in the superb Broadway mystery Love is a Racket opposite Douglas Fairbanks, Jr. In the early 30s, she bolted for Europe with her new husband, Leslie Fenton, before she really had a strong position at the studio, and basically screwed up her career. When she returned, Warners put her on the back burner for her rebelliousness. She never regained her status, ceding it to Bette Davis, who waited until she was in a much stronger position to stage her eventual showdown with the studio. It might take a lifetime for an actress to get as many great parts as Dvorak had in 1932, alone. 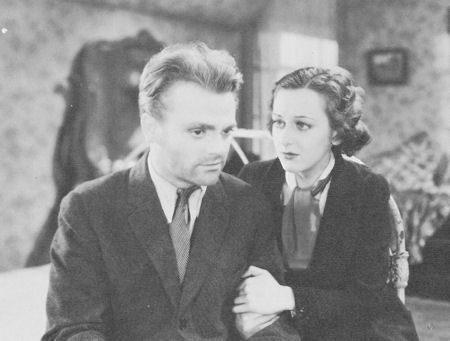 Cagney became close with Frank McHugh, with whom he would make many films.  McHugh was one of those WB character actors who, in the scripts, was often identified by his real, and not character name, since the studio knew which contract player would be cast.  He often played loveable side kicks named things like Spud or Tootles.  “Someone once asked me if I minded being a Cagney supporting player” he once said, “It was a question sincerely meant, and I didn’t take umbrage at it.  I merely told this person that when you play the Palace, you are honored to be on the same bill with the star, if it’s a star of Jim’s magnitude.” (McCabe 97).

“Having recorded the buzzing of airplanes, the rattle of gangster pistols, the slow thunder of  artillery, the drumming of horses hoofs, the squealing of police sirens and other disturbing decibels, it was time for the cinema to investigate the uproars of the common motor car.  In this picture, the automobiles are small, slim, built for racing.  Less sleek and decorative than the vehicles I which the late Wallace Reid transported himself as the hero of similar sagas about motor racing, they are more exciting and dangerous.  There are three races in the course of the picture, two serious accidents, innumerable skids, two gasoline tank fires.  All of this, photographed brilliantly and from every angle is enough to make The Crowd Roars a dreadful and stimulating spectacle” Time Magazine (Dickens 63).

For more on Joan Blondell, James Cagney and Ann Dvorak, go to Blonde Crazy, Three on a Match, Scarface.

Photos from Dickens and Hilda Price’s scrapbook. Sources include: Howard Hawks by Todd McCarthy, Cagney by John McCabe, The Films of James Cagney by Homer Dickens, Hawks on Hawks by Joseph McBride.