A small time criminal is hired to steal a box containing a crore (10 million rupees–about $200,000) or two of gold. But, there are too many people after him for it to be that simple. What has he stolen, and why is everyone so desperate to get their hands on it?

Moviediva, jr., and I discovered this film because of a song, “Shabba, Shabba,” excerpted on Chalak, Chalak, a music video compilation DVD of Hindi film drinking songs. This number appears in Daud right after the interval. The music is catchy, of course, but I also love the design of the song, the exoticism juxtaposed with the mundane, traditional costumes mixed with the modern, Neeraj Vora in a Jockey baseball cap and running shoes dancing with the girls in their intensely colored traditional dresses and veils. The lyrics, translated in the song DVD, but not in the film DVD, say “Lord, how I like to get high at sunset. Is it just the excitement or my youth, or is it someone’s love? God knows (Jaane Ram).”

Daud is a variation on an Alfred Hitchcock “chase after the Maguffin” film, (meaning, the thing that is chased is unimportant, only an excuse for the pursuit) during which the escaping hero and heroine fall in love. There is a little bit of Kiss Me Deadly thrown in, too. Just as American films are obsessed with the Mafia and mob violence, the standard Hindi film villain is a terrorist, usually from an unnamed country, but of course, Pakistan. In one scene, as the villain “monologues” he identifies the countries by their star cricket players.

Daud director Ram Gopal Varma is considered to be a rebel, trying to subvert many conventions of the Bollywood film, which you can see, for example, when one character says to another, “Can I borrow your shirt to sing this song?” to explain the usually unmotivated costume changes in each musical number. The Western costumes, as always, are bizarre, and bizarrely unfashionable. In the last song, the heroine played by Urmila wears a dress with an airborne chiffon scarf, like Cyd Charisse’s in part of the “Born to Dance” number from Singin’ in the Rain. Note, as well, Ram Gopal’s censor-challenging kiss (although photographed mostly in a long shot). Violence is perfectly acceptable in Hindi films, but no kissing, please.

Indian films always reference other Indian films, part of the country’s collective culture. In Daud there is a specific reference to the 1970s classic Sholay. Daud heroine Bhavani is driving a truck, and identifies herself with Bashanti, the female horse cart driver in Sholay. But, the main reason for the reference seems to be the similarly heartless villains in both films, who don’t hesitate to kill women and children, Gabbar Singh in Sholay and Pinky, here. Until fairly recently, the only form of popular music in India (not folk or classical) was film music, so Hindi film songs are well known by everyone. In another scene, the villain leads a game called “Antakshari” in which one person sings a film song, and the next player has to start a song with the last syllable of the last line of the preceding song.

These films are done on multiple schedules, meaning that the stars work on several different films at the same time, giving a director a few days here, a few weeks here, so it takes a long time for a movie to be completed. One reason a film like Aamir Khan’s Oscar-nominated Lagaan is remarkable is because cast and crew were committed to completing it from beginning to end. Continuity is a problem in many Hindi films. The hero and heroine often have slightly differing haircuts, sometimes within the same scene. In some scenes, Sanjay has a hairy chest, and and in others, not, another continuity problem not unknown in his films and others.

I think it is fascinating to watch the movies directors make for and about their girlfriends/wives/obsessions. Ram Gopal Varma discovered Urmila, and starred her (as an aspiring movie star) in a huge hit of the early 90s, Rangeela. I am not a fan of this film, which I find unwatchable at times for the way the heroine callously treats the affection of her old childhood friend in her quest for fame. Ram Gopal, who is married, has gone on to other cinematic leading ladies, and his reviews hint he is looking for the next Urmila, so far without much success. Like Marlene Dietrich/Josef Von Sternberg, Orson Welles/Rita Hayworth, DW Griffith/Lillian Gish, etc., the objects of affection always look beautiful, and are lavished with close-ups. But, it is also interesting whom the directors get to step in for themselves as an alter-ego. Sometimes, if the director is not acting the part of the lover himself (as Welles/Hayworth in Lady from Shanghai) he will make his heroine fall in love with someone he resembles physically, short, middle aged, modest in appearance, (like von Sternberg/Adolphe Menjou in Morocco) so he can feel a part of the fantasy, too. But, this director saw himself quite differently, since he looks more like the character of police inspector with the glasses, in other words, more like an Indian graduate student than a movie star. I guess Ram Gopal dreams of looking like Sanjay, and making on screen love to Urmila and her 5,000 scanty costumes. It’s also interesting that the hero is more emotionally vulnerable in the romantic relationship, as well as being less aggressive than the heroine in the hotsy-totsy dance numbers. 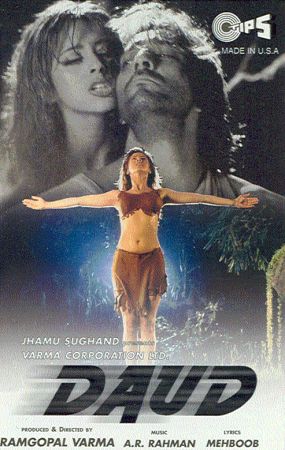 The cover of the cassette tape, with Urmila in a “Maureen O’Sullivan as Tarzan’s Jane” outfit, clues you in that Daud is modest in its artistic aspirations.

Sanjay Dutt is one of those movie stars with an enviable star lineage, very important in the Bombay film industry. His mother was Nargis, a fabulously beautiful leading lady of the 1950s, the obsession of her director, Raj Kapoor, who acted with her and photographed her as exquisitely as any besotted director has ever immortalized his love, in Aag, Awaara, Shree 420 and other classic films. Kapoor wouldn’t leave his wife (who steadfastly weathered many of his romantic sojourns) and Nargis, after starring in the iconic Hindi film, Mother India, married Suniel Dutt, who played her wayward son in the film, although they were the same age. She died quite young, of cancer, at 52.

Sanjay has provided his share of tabloid fodder, youthful drug problems and a stint in rehab were followed by still pending accusations of gun running at a time of great Muslim-Hindu unrest in Bombay in the early 1990s. He has served some jail time for this—although Hindi film books/journalism always assume that you know these stories by heart, and never bother to spell them out for you. Moviediva, jr. and I saw him in a lot of films, playing hard-bitten old Army colonels, or gundas (thugs) of one stripe or another, before he really clicked with us in the delightful Munnabhai, MBBS, a fast-paced comedy about a gangster who cheats his way into medical school. He’s very game in Daud’s musical numbers, although he’s rather a stiff dancer, but at least he can count…evidenced by the fact there are fairly long dance sequences without too many cuts. Often, in Bollywood, the worse the dancer, the quicker the editing. In fact–full disclosure–I love to watch him dance. Khauff isn’t a great movie, but filled with lavish Sanjay-centered songs. Thanedaar is thoroughly enjoyable B picture, and he keeps up with Madhuri Dixit, like Urmila, another excellent dancer. In Daud, he’s big enough to lift Urmila, although that doesn’t prevent him from nearly dropping her in the first song. (Another thing I like about Hindi movies results from the fact that raw stock, all imported from abroad, is one of the most expensive budget items—in India, film is subject to a “sin tax” like alcohol and tobacco. So, they never seem to do another take if the first one is “close enough,” providing a bit of unplanned authenticity.)

The music is by A.R. Rahman, considered by many to be the most prestigious, envelope-pushing composer on the current scene. He incorporates diverse influences into his music, and his scores are almost always interesting and singable. This is not one of his more well known scores, but an extremely enjoyable one, with plenty of repeat value.

Unlike Kabhi Khushi Kabhie Gham, this is not an “emotional family drama” but an action comedy, done slap-dash and fairly on the cheap in real locations instead of the controlled environment of the studio set. Daud is definitely on the guilty pleasure side of the Hindi film equation.