The Golden Age of Mexican Cinema is considered to be the 1940s and 50s, with a studio system, and a star roster, similar to Hollywood’s.  Some films south of the border were versions of Hollywood genres, but some were unique to Mexico, like the luchador horror films.  Mexico produced more Spanish language films than any other country.  As J. Hoberman described the Mexico at Midnight program at the Museum of Modern Art, in which this film was included, they “overflow with fatalistic tales of passion, jealousy and betrayal…part film noir, part grand opera” (Hoberman).

These urban melodramas were linked to Mexico’s post war modernization. MoMA’s show had its origin at the Morelia International Film Festival in Mexico, where the director, Daniela Michel said the films depicted “political and social corruption, greed, international espionage, and even Freudian neurosis,” their audience a freshly created urban middle class (Hoberman).  Because there was no Production Code in Mexico, the films are surprisingly sexy, a parallel universe to Hollywood studio films of the same era. Still, they are suffused with a strong Catholic morality. The acting style is big, which I love. Realism is overrated! This film evokes the American film noir, Nightmare Alley, with its fortune telling crook. 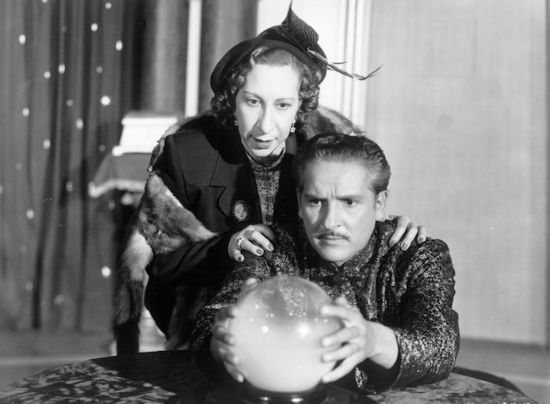 Here is one of Karin’s clients, Consuelo Guerrero de Luna, and the crystal ball.

Roberto Gavaldón was known as the Master of Melodrama.  He was born in Ciudad Jimenez in 1909, a year before the Mexican Revolution.  His family was middle class but living in the region where the conflict was born divided his family.  He planned to become either an architect or an engineer and went to Mexico City to study, and to live amongst the intellectual and cultural influences of a sophisticated city.

In the early 1930s, he moved to Hollywood for economic opportunity, working as a waiter at the Roosevelt Hotel and as a nightclub bouncer.  As a friend to the Mexican actors who arrived in Hollywood at the dawn of the talkies to make Spanish language versions of popular movies, he also worked as an extra.  Returning to his native country, he worked a vast array of jobs in films, as an extra, prop man, soundman, editor and cameraman.  He assisted most of the important directors working in Mexico at the time.  He learned his craft well.  His first film as a director La barraca (The Shack) was based on a novel by Vicente Blasco Ibañez, whose books, like The Four Horsemen of the Apocalypse, Torrent and Blood and Sand were often adapted for the American screen.  The Shack was praised for the realism of its meticulous Spanish atmosphere, but his subsequent films incorporated many of the conventions of film noir.  The greatest stars of Mexican films are considered to have played their most vivid roles in Gavaldón’s films, which were huge box office hits.  Off-screen, his liberal politics were influential in public life.  He was one of the founders and directors of a union for film workers, and then became a national deputy directly influencing legislation affecting the film industry.  He’s considered to be the last great director of the Golden Age, and he made films until 1979. “His strong, demanding temperament and his perfectionism, earned him the nickname ‘the ogre.’  Even today, those who knew him either respect and admire him, or prefer not to talk about him at all” (Paranagua 200).

This film was written by a former crime reporter, José Revueltas, who was one of the most important Mexican writers.  His cinematographer was Alex Phillips, a Canadian who had worked in Hollywood, thanks to a meeting with fellow Canadian Mary Pickford who he met while serving in the army, presumably during WW I.  He shot Mexico’s first sound film in 1931 and remained in the country the rest of his life.  Gavladón, Revueltas and Phillips created the most sophisticated Mexican cinema of the Golden Age. Gavladon returned over and over again to several important themes in his work, including an obsession with death.  The Kneeling Goddess, La Otra, and In The Palm of Your Hand can almost be seen as a trilogy in which a glamorous, but treacherous woman ensnares a weak man in her schemes. 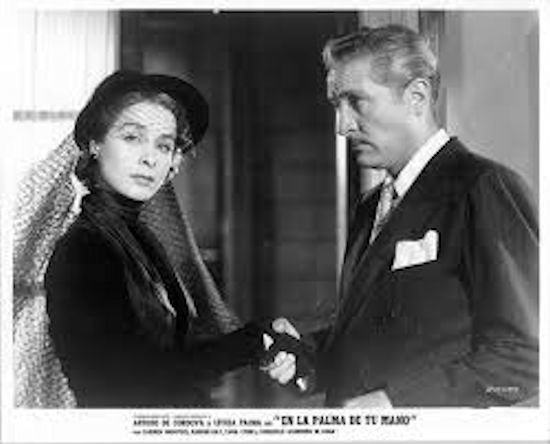 I wish there was a better picture of this ourtit. She wears a long taffeta scarf wrapped tightly around her neck, and then the long ends cover her breasts, are cinched in by a belt, and reach to the hem of her dress.

Arturo de Córdova was born in Merida, Mexico, although his family was Cuban. He was a big star in his native country, at first in adventure films.  He dipped his toe in the “Latin lover” pool in Hollywood, but played few roles in the US, although he was the sexy pirate in Frenchman’s Creek and co-starred in For Whom the Bell Tolls. He also made films in Argentina and worked in Mexico with Luis Buñuel. His performance here is understated in comparison to the two dramatic women in his life. It appears Karin is in control of the situation, but when becomes clear that Ada pulls the strings, he begins to lose is calm demeanor.

Leticia Palma acted in only a dozen films between 1946-1952. She was in a traffic accident with Jorge Negrete, actor and the President of the Actors Union, a squabble about the accident mushroomed into a power struggle about the union, resulting in her being blacklisted from the film industry.  This is her most famous role, and she is wonderful, as both a purring cat and a vengeful urban goddess, depending on which part she needs to play to manipulate which helpless male.  He clothes are marvelously chic, reflecting Dior’s New Look with tiny, cinched waistlines and dramatic draped hips.  She wears black veils—smokes cigarettes through them! —and dramatic hats.  She carries an enormous fur muff, reflecting her savage manipulation of her male prey. 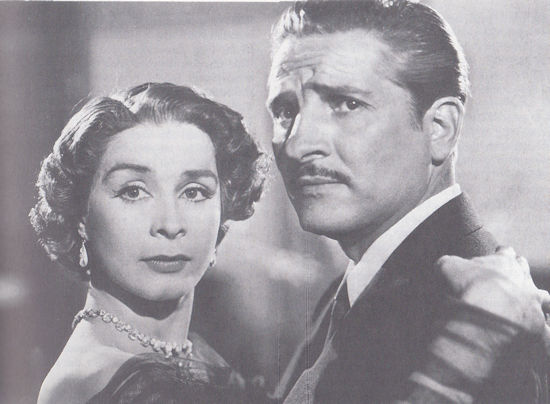 This restoration was part of a program on the CINE NEGRO or Noir movies from the Mexican golden age.  It is a 2k restoration made primarily from nitrate negatives. A gap in one particular scene necessitated the use of other original materials to reintegrate before digital cleaning. Balancing the lights and darks was challenging as there were some particularity dark scenes in the existing material, but this DCP looked absolutely gorgeous on screen.

“A brilliant technician, Gavaldón developed a distinctive visual style—based on bold back-lighting and intricately subdivided spaces—that suggests the film noir stylings of Hollywood directors like Anthony Mann and Joseph H. Lewis. With the assistance of such regular collaborators as the cinematographer Alex Phillips, the writer and political activist José Revueltas, and the composer Raúl Lavista, Gavaldón created a dense and coherent body of work that is only now being rediscovered, thanks largely to the ongoing restoration work of Mexico’s two major archives, the Cineteca Nacional and the Filmoteca de la UNAM” (MoMA).

“We are kept guessing who will outdo who in this spirited noir, in which just about everyone has a murderous motive or a secret to hide. True to the memento-mori motif of his earlier films, Gavaldón also frequently hints at predestination—we can never tell if Karim and Ada are meant to hate or to love each other, but they do seem fated to meet” (mubi.com). 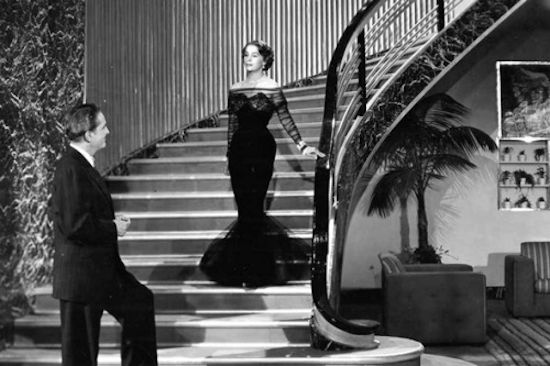 This dress is covered in net. Her bust is lace, and then there is a net shrug over the bodice, creating sleeves. The back is a low V. 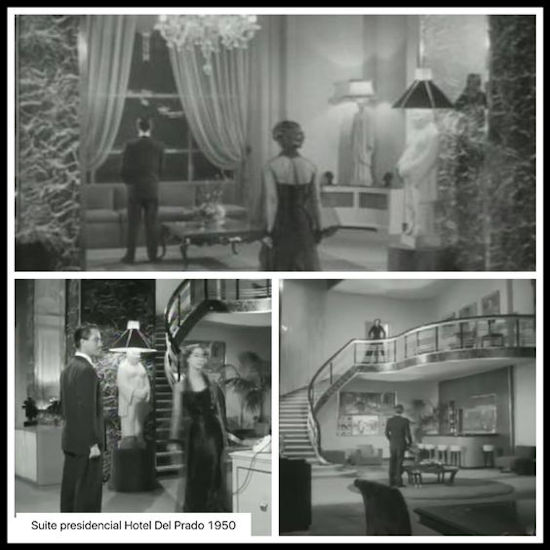 Mexico City is a setting and a co-star, like LA in many classic American noirs.  Karim works down a narrow street, his looming neon advertisements beckoning his clients.  The interiors are equally striking.  A restaurant with huge Day of the Dead murals, a bar with paintings of snorting horses on the walls.  So many challenging staircases, made of rock, iron, sweeping magnificently down to Ada’s decadent hotel room, and into the bowels of the morgue, leading the characters to heaven, or more likely, the other place.

Here is the metropolis, “both grand and ramshackle, as teeming with life, danger and possibility as her own beloved New York. Córdova’s character, “Professor” Karin, runs his soothsayer racket out of a tall colonial building near the Juarez monument. The massive neon sign that advertises his trade towers over Karin every time he steps outside…Once Karin meets his match, in the form of a scheming widow played by Leticia Palma, he visits her apartment, and finds it tricked out with a dizzying staircase, fur rugs and ebony marble, the lair of a huntress. If you’re going to hell, this is the handbasket you’d pick” (self-styled siren). 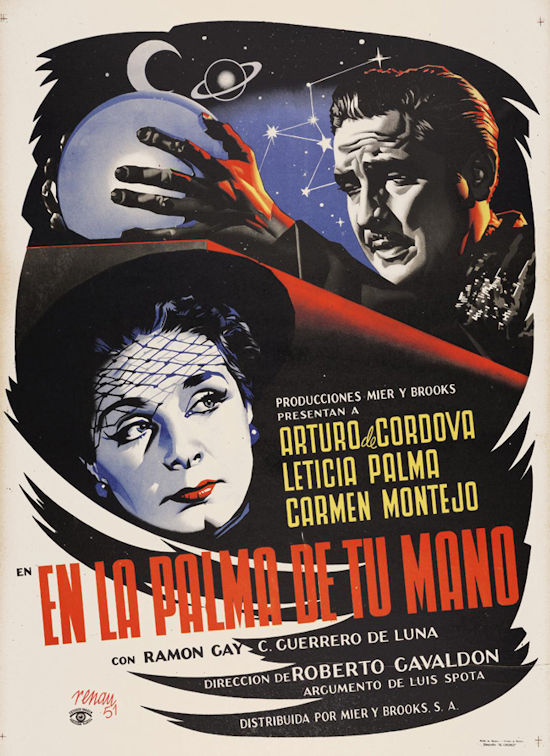