What would film noir be without the evil twin?  Hollywood refugee Dolores del Rio returns to her native Mexico for the meaty roles she could no longer land in tinseltown, like this one about struggling working girl’s obsession with her rich and heedless sister.  “La Otra is a cruel and perfect film, one that first gets you to sympathize with its working girl — the world tries to push Poor Twin, a manicurist, into prostitution — and then makes her the villain” (Village Voice).

Like last week’s film, The Kneeling Goddess, La otra is directed by Roberto Gavaldon, known as the Master of Melodrama.  He was born in Ciudad Jimenez in 1909, a year before the Mexican Revolution.  His family was middle class, but living in the region where the conflict was born divided his family.  He planned to become either an architect or an engineer and went to Mexico City to study, and to live amongst the intellectual and cultural influences of a sophisticated city.

In the early 1930s, he moved to Hollywood for economic opportunity, working as a waiter at the Roosevelt Hotel and as a nightclub bouncer.  As a friend of the Mexican actors who arrived in Hollywood at the dawn of the talkies to make Spanish language versions of popular movies, he also worked as an extra.  Returning to his native country, he worked a vast array of jobs, as an extra, prop man, soundman, editor and cameraman.  He assisted most of the important directors working in Mexico at the time.  He learned his craft well.  His first film as a director La barraca  (The Shack) was based on a novel by Vicente Blasco Ibanez, whose books, like The Four Horsemen of the Apocalypse, Torrent and Blood and Sand were often adapted for the American screen.  The Shack was praised for the realism of its meticulous Spanish atmosphere, but his subsequent films incorporated many of the conventions of film noir.  The greatest stars of Mexican film, played their most vivid roles in Gavaldon’s films. 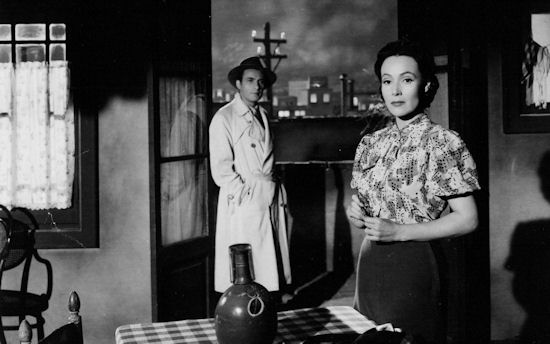 Dolores del Rio was born in Durango, Mexico, into an aristocratic Mexican family. They were forced to flee from Pancho Villa, when his army seized her father’s bank, and their home. She attended convent school, where she was groomed to become an accomplished lady.  At 15, she married a wealthy rancher almost 20 years her senior, and she lived the life of a rich socialite, making the rounds of prominent social events, opera, bullfighting and seasons in Europe, where she studied dancing and shopped for expensive couture gowns.  But, she was bored, and her husband, a lawyer, longed to be a playwright.

Hollywood director Edwin Carewe was honeymooning in Mexico City in 1925, and was so entranced by the tango of the beautiful Mrs. Del Rio at a tea she hosted at her villa, that he urged her to try her luck in Hollywood.  She would be an actress, and her husband, a screenwriter. Both her and her husband’s family thought her plan to be the first member of either side to be an actress was disgraceful.  “Very well, I will be the first,” she said (Bodeen 267). In 1928, after playing Charmaine, the French lass over which American soldiers squabble in a film version of the Broadway smash, What Price Glory? she achieved stardom in the title role of Ramona, based on a famous novel of old California. 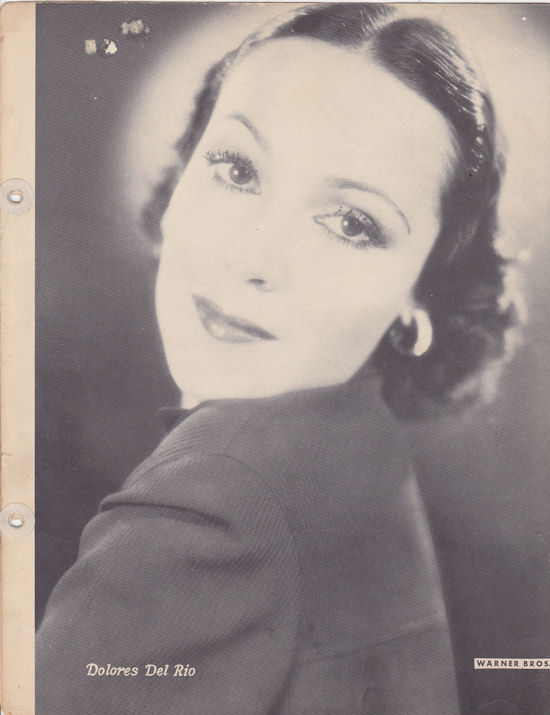 Here is a scrapbook glamour shot from right around 1930, I’m guessing. It highlights her personal style, which adapted traditional Mexican beauty for a modern cinematic audience.

Her husband’s writing aspirations were thwarted, and he left Hollywood, and died shortly afterwards in a sanitarium, of blood poisoning.   Rather than marrying her mentor, Carewe, she married Cedric Gibbons, the legendary MGM production designer, who brought Art Deco style to Hollywood, and designed an extravagant Moderne house for them.  Her accent limited her roles in talkies, although she was still a big star, and is marvelous in Flying Down to Rio, the peak of her career in sound films, a musical that first paired Fred Astaire and Ginger Rogers.

She played various exotic sirens, and had a passionate affair with Orson Welles (she accompanied him to the premiere of Citizen Kane). He was ten years younger, and called her “the most exciting woman I’ve ever met” resulting in another divorce. But, after their affair cooled, in 1943, at the age of 37, she returned to her native Mexico and began making films in her native language for the first time, becoming a huge star during the Golden Age of Mexican Cinema.  She did occasionally return to the US for character roles, such as Elvis Presley’s mother in Flaming Star, and as a Native American woman in John Ford’s Cheyenne Autumn.  She was also a regular on 1960s series television. She retained her exceptional beauty as she aged, with the help of hibiscus juice and 16 hours of sleep a night. “I never drink, I never diet, I always stay in love” (Tapert 147). 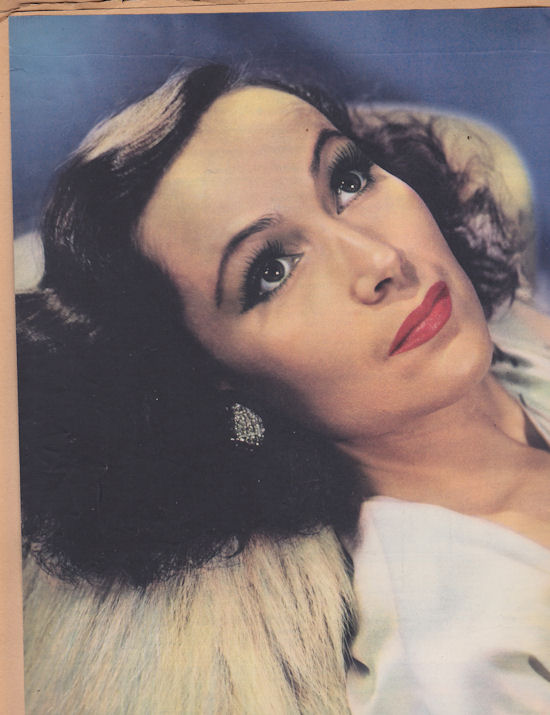 Here is a scrapbook glamour shot from the mid-1940s, probably right before she went back to Mexico.

Although some Hollywood films did play in Mexico, there was always a strong preference among audiences for Mexican cinema. Strong roles for women could be lacking in a more conservative film culture, but film noir in Mexico, like the in US, brought dynamic female characters to the screen.  La otra (The Other One, or The Other Woman) reveals one of Gavaldon’s recurring themes, that of doubles or twins.  Also like American film noir, La otra uses mirrors lavishly to reflect characters’ duality.

Perplexingly, one author (Gustavo Garcia) is convinced that La Otra is identical, scene for scene to Curtis Bernhardt’s A Stolen Life even though the films were adapted from different sources and were filmed at the same time, “with much more sensual and disquieting results in del Rio’s than Bette Davis version” (Paranagua 160).  Ariel Zuniga is convinced the film is a close copy of Robert Siodmak’s The Dark Mirror, starring Olivia de Havilland, also 1946, described as “more timid and Puritan” than La otra ((Paranagua 198).  Another author insists that Warner Brothers purchased the rights to La otra and eventually filmed it as another Bette Davis vehicle, Dead Ringer. (1964) Who is correct?  I see that I am going to have to watch all of these films, now, to resolve this conflict!

Note: Dead Ringer is most definitely La Otra, unlike the other films mentioned. The source material is the same story by Rian James. Dead Ringer adapts some of the visual images, like the long staircase to the poor twin’s apartment, and the grand staircase at the rich twin’s house, as well as strong moments from the Mexican film, removing the dead twin’s stockings, the husband’s dog, the reading of the will, etc. Director Paul Henreid (Davis’ co-star in Now, Voyager) must have seen La Otra. He even transposes some of the Catholic details, without hitting them with quite the force of Gavaldon.

What a treat to be able to see this amazing film! The lighting and decor are dramatic, the Rich Twin lives in a house decorated in that swirly 1940s rococco style. Most of the scenes in which both twins appear are done without showy effects, using shadows, lighting, and implication, and del Rio’s stand in. I have seen The Dark Mirror, and the acting in La Otra is much better, the de Havilland film resorts to identifying monograms, in case we can’t tell which twin she is playing. The glamour quotient in this film is high, as is the arch of Ms. del Rio’s eyebrow. The audience at the North Carolina Museum of Art was carried away by the tension, melodrama, and the atmosphere of Catholic guilt, resulting in the final irony. 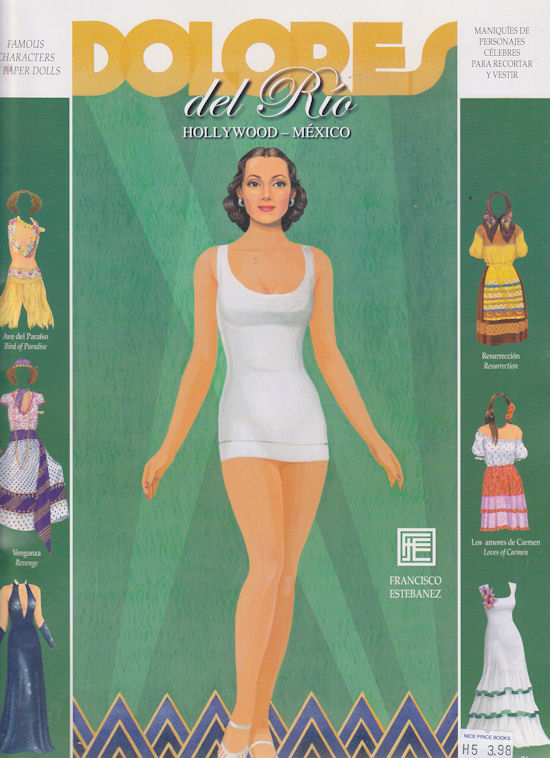 I love paper doll books! I found this one randomly in a used book store. Spanish first, English second. The sleeves of the onscreen version were twice as full as these, made out of a drapey silk crepe. The single coin bracelet was a gift from Poor Twin’s boyfriend; she put it on Rich Twin’s body to wrongly identify it. The hands on the blouse are printed, the ring is embroidered with sequins. 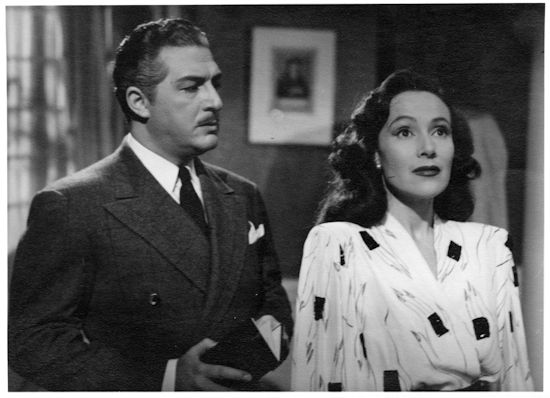 Here it is in the film!

Mexican Cinema by Paulo Antonio Paranagua translated by Ana M. Lopez, Celluloid Nationalism and Other Melodramas by Susan Dever, Mexican Cinema Mexican Woman by Joanne Hershfield,  The Power of Glamour by Annette Tapert, “Dolores Del Rio” in the May, 1967 Films in Review