In the 1920s, the businessman was enthroned as a paragon, a go-getter whose ambition made fortunes, and bestowed happiness on all under his benevolent shadow. His wealth was both monetary and spiritual.  After the stock market crash of 1929, the public perception of businessmen changed dramatically.  He was now an arch villain, whose greed had created the economic disaster.  The business of America is business said President Calvin Coolidge, but his boom era optimism didn’t fly during the Herbert Hoover era of bust.

The Match King is a fictionalized biography of a real person, Ivar Kreuger, a businessman, monopolist and swindler, whose story would have been well known to everyone who saw this film in 1932. John Kenneth Galbraith wrote “Boiler-room operators, peddlers of stocks in the imaginary Canadian mines, mutual-fund managers whose genius and imagination are unconstrained by integrity, as well as less exotic larcenists, should read about Kreuger. He was the Leonardo of their craft.”( Shaplen p. x)  Kruger inciminated himself by saying, “I’ve built my enterprise on the firmest ground that can be found – the foolishness of people.” Perhaps Andrew Beattie summed it up best: “Ivar Kreuger is still a bit of an enigma in history. … At times it seemed that he was a solid, if ruthless, businessman, and at other times he appeared every inch a scam artist. Between those times, he either built a match monopoly that overreached or orchestrated one of the biggest pyramid schemes in history.”

Kruger’s family owned match factories. This was a small commodity everyone needed, to light their lamps, stoves and cigarettes. His safety matches used a type of phosphorus that was less dangerous than the current standard. He turned the growing companies into a stock corporation to evade financial problems with the hope of eventually monopolizing Scandinavian match production. He granted loans to national governments for reconstruction after WWI, through various bonds and shares, governments which in turn guaranteed him match monopolies.  He owned banks, and also much of the Swedish forestry industry.  In 1931 he owned around 200 companies worth about $100 billion using present day accounting.  But, he speculated both with his personal funds and with company money, shuffling currency around to create the illusion of profits for his investors.  “He had always sailed close to the edge of legitimacy; keeping liabilities “off balance sheet”, establishing a network of more than 200 firms that bamboozled his auditors and bankers, and inventing non-voting shares.”  He stashed cash, and began Enron-ish slight of hand, reporting non-existent profits and paying huge dividends so people wouldn’t lose confidence (BBC). After the stock market crash, in 1932, his loans were so extensive that there was the possibility that Swedish currency could be devalued, and when the government demanded an accounting, the jig was up. But, he was not a complete fraud, like Bernie Madoff.  Some of his companies, like the Swedish match company and Ericsson telephone still exist today.  And, many of his investors did eventually get reimbursed.

Paul Kroll, played by Warren William, determines that matches are the one thing no person can do without.  His success is stacked up on the betrayal of everyone he knows, stopping at nothing from fraud to robbery to murder.  Kroll embodies the n roaring 20s go-getter, reviled during the Depression. He does work hard, although at swindling.  Kroll uses advertising to his advantage. He creates the superstition of “three on a match” as bad luck to sell more matches (saying that the third cigarette lit by a single match in the trenches of WW I would draw sniper fire).  Yes, he’s out for number one, but during the depths of the Depression, audiences might ask themselves, “What’s wrong with that?”  They are a 20th century reflection of our own hovering hard times. “Everyone’s survival instincts have kicked in, keeping the films hustlers on the nervous go.  If you linger, you lose.  If you stop, you might starve” (Wolcott 194). 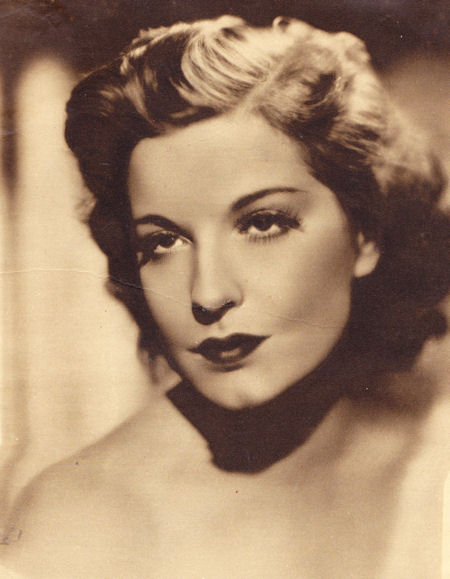 Glamour portrait of Lili (or Lily) Damita from a c. 1933 movie star scrapbook compiled by Hilda Price. The caption reads, “Lily Damita, having completed “This is the Night” for Paramount, departed for Honolulu to meet Sidney Smith, her fiancé. Some say they’ll marry out there. Others say they’re already wed. Lily declines to enlighten the press or her friends on the subject. She has introduced bangs to Hollywood. And, has recently lost ten pounds. You’ll see her in Eddie Cantor’s “The Kid From Spain” in which she’ll have a chance to dance and sing again.” French actress Damita is best know for her stormy marriage to Errol Flynn (1935-1942). She was never married to “Sidney Smith, her fiancé.”

Warner Brothers specialized in topical dramas, played at a breakneck pace.  It was said that some directors cut a frame out of every shot to keep the story rocketing along.  “Warner Brothers films have the thick smudge and shout of tabloid headlines: they’re brisk slangy, succinct, socially conscious, culturally unpretentious, ethnically diverse and streamlined In their scenic design, letting shadows do the work instead of opening a furniture showroom on screen” (Wolcott 198).
“There is no actor who can talk big money quite as effectively before the camera as Mr. Williams” according to the New York Journal, and the New York Post dubbed him “the master charlatan of the screen…(who) brought villainy to a high place in pictures without any noticeable diminution of his own popularity” (La Salle 149). 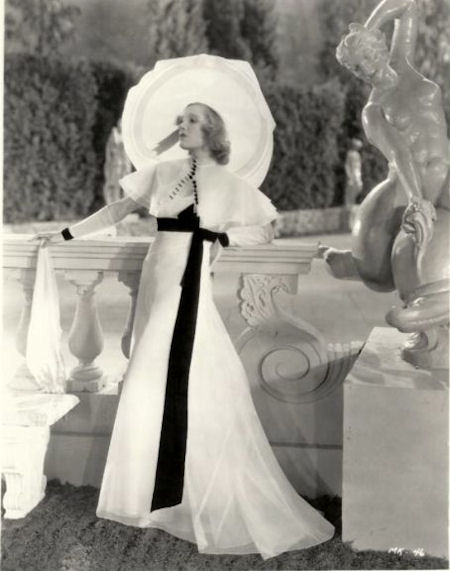 Williams thrived as a scoundrel in Warner Brothers breathless Pre-Code melodramas.  The pace in which they were shot is also breathless.  He was in seven films in 1932, six in 1933 and eight in 1934.  After the Production Code was enforced starting in mid-1934, the type of role in which he excelled was no longer acceptable on screen.  “Only a relatively uncensored cinema could have allowed a phenomenon like William to occur, and only a public toughened up by the Depression could have had the mordant humor to respond to his movies” (LaSalle 149).  He continued his career mostly in B pictures. He played Perry Mason in a series of films, and a detective called the Lone Wolf. 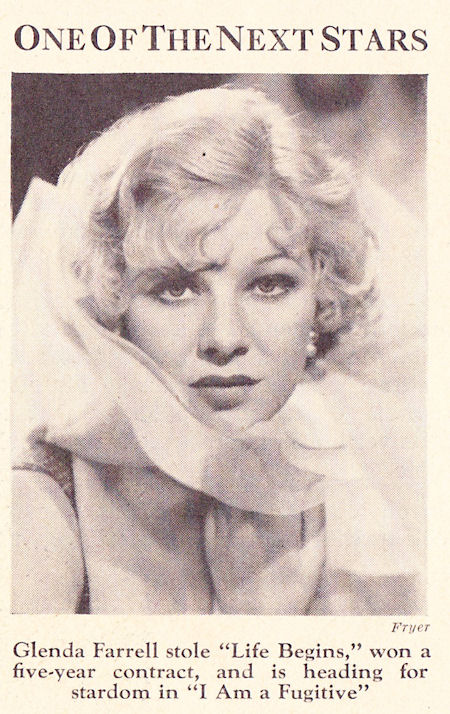 From the December, 1932 Motion Picture Magazine. Ms. Farrell, a native New Yorker, was a Warner Brothers staple, and improved every film in which she appeared, usually in a supporting role.

He was born Warren William Krech in Aitkin MN in 1894.  His father published the local newspaper.  Not much of a scholar, he didn’t graduate high school until he was 21.  When he had the opportunity to join the Army during WWI he did, becoming a sergeant.  While in the service, he acted in a YMCA troop show.  When he got back to the States, he decided to try his hand at the stage, and acted while studying at the Academy of Dramatic Arts.  He made his movie debut in 1922, but acted primarily on the stage with middling success.  When John Barrymore, who had been a big star at Warner Brothers quit the studio, William’s resemblance to that star did not go unnoticed and he was signed by the studio and immediately began playing leading roles.  Skyscraper Souls, Employees’ Entrance, Gold Diggers of 1933 and many others cemented his image as a rakish ne’er do well.  But, he was nothing like his screen character.  Fond of gardening and an amateur inventor (he devised an early version of the Winnebago, a lawn vacuum cleaner and a revolving doghouse) he remained married to the same wife for 25 years.  He died in 1948 of multiple myeloma. 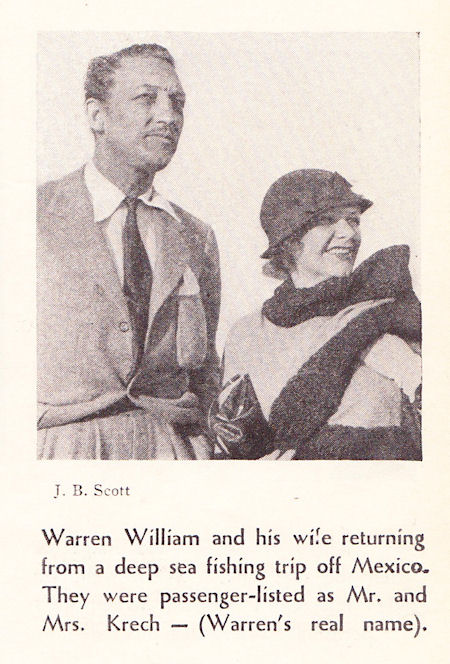 Published in the February, 1933 issue of Modern Screen, which also contains the brief review below.

“If William’s smooth frauds had a weakness, it was a very human one.  On some level, they believed their own lies.  And, when they were sincere, they seemed to want to make the fraudulent part real.  It’s probably why audiences found it easy to love him.  However cynical his characters may have been, William was never ultimately cynical, as in hate-filled or nihilistic.  His frauds and crooks were, at heart, fantasists.  In his distinctly Pre-Code way, William was a romantic” (LaSalle 151).

One the “Directory” page, the reviewer notes, “Good–not much in it for children.”

This is one of William’s great villainous roles at Warner Brothers, and he gets to pull out all the stops, from his seedy origins to a self-assured international businessman. As usual, the pace of production was swift, 25 shooting days at a cost of $165,000. The character of Marta Mulnar (Lili Damita) based on Greta Garbo, with whom Kreuger may have had a flirtation. Critics thought his performance the major attraction of the film, “Warren William is the perfect article as Paul Kroll.  He make The Match King an entirely credible and a completely, repellently fascinating person.  He’s expressive from his head to his toes” said the Chicago Tribune (Stangeland 112). 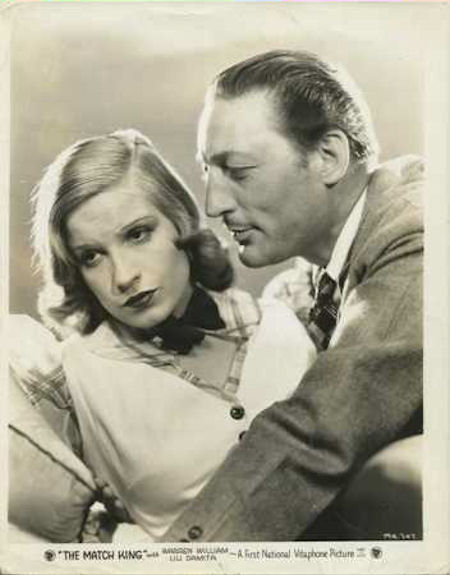 “The role required a seductive, charming actor whom audiences could accept as a lothario, an actor with an ability to overwhelm people with torrents of pompous bravado, an actor with a sense of irony, who could bring out the script’s humor, an actor the audience could accept as a murderer; an actor appealing enough for viewers to root for, in spite of themselves; and an actor who could blow his brains out at the end of the picture without in any way saddening the audience.  No other actor could have fit the bill” (LaSalle 155).

“In Pre-Code cinema it’s the penthouse or the pavement, soar or splat, with no safety net to break an individual’s or a family’s fall…lives could pop like balloons” (Wolcott 198).