“This ‘genius’ made money, it seemed–unlike that other one at RKO (1941 was also the year of Citizen Kane)–and he played the Hollywood game, not reluctantly, but eagerly, or so it seemed at the time.” –James Harvey, Romantic Comedy in Hollywood.

A dissatisfied movie director takes to hobo-ing to inspire his epic of the dispossessed, O Brother, Where Art Thou? (instead of the film his producers want, Ants in Your Plants of 1941). Witty Sturges wrote the most literate scripts in film history, and then directed them himself. McCrea and Lake are “movie star sublime. More sparks fly from their first encounter than most current screen couples can muster in an entire film.” (Tim Purtell)

Sullivan’s Travels was made in the midst of Preston Sturges great run of 1940s comedies, a cycle unmatched in the history of film. Between 1940-43, he wrote and directed The Great McGinty, Christmas in July, The Lady Eve, Sullivan’s Travels, The Palm Beach Story, Miracle of Morgan’s Creek, and Hail the Conquering Hero, as well as writing several other scripts, including I Married a Witch. His sets were jolly, but his production methods concise. He liked to do long sequences in a single take, to be on time and under budget, a good negotiating ploy. The opening sequence of Sullivan’s Travels was scheduled for two days and numerous set-ups. Confounding studio normalcy, he spent the whole day meticulously setting up the shot and was ready to shoot at 5:00pm. He quickly shot four takes and they were printed for the next day’s rushes at 6:00am. The suits considered this to be behind schedule, since he didn’t start shooting until quitting time, and marked him a day behind schedule. Obstinately, Sturges visibly stalled through another shooting day, until he really was a day behind.

The Lady Eve had just produced the best reviews of his career, and Sullivan’s Travels was the first film that he wrote knowing he would direct it. “After I saw a couple of pictures put out by some of my fellow comedy directors, which seemed to have abandoned the fun in favor of the message, I wrote Sullivan’s Travels to satisfy an urge to tell them that they were getting a little too deep-dish; to leave the preaching to the preachers.” John Huston and William Wyler had toyed with the idea of a film about the kids who took to the rails in the pre-New Deal days of the early 30s and had actually bummed around doing research. Sturges had accompanied them to an LA flophouse for a couple of nights and had begun to wonder, “how does a lucky man confront an unjust world?” (Jacobs). Sturges himself was that lucky man, the privileged prep schoolboy (like Sullivan) who didn’t know what it was like to be hungry.

He idolized sophisticated director Ernst Lubitsch (referred to by name in the film) and felt compelled to disassociate himself from Frank Capra and his brand of populist “Capracorn” and whose latest film, Meet John Doe could be described as a comedy only because Capra made comedies. French film critic Andre Bazin has called Sturges the anti-Capra. Gerald Mast points out in The Comic Mind, “Like Capra, Sturges was better with comic scenes than with explicit ideology and had as much trouble as Capra at combining funny incidents and serious issues in the same film. And, despite his belief in the brain, Sturges’ most affectionate and sympathetic people, like Capra’s have sincere hearts beneath their tough exteriors.” The lived-in faces that Sturges casts as the downtrodden don’t look like the Hollywood idea of poverty.  Sturges films have a romantic couple foregrounded, but he loved his eccentric supporting players almost better, using the same 40 actors in almost every one of his films. And, like in Capra’s movies, they weren’t just for atmosphere, they get a lot of good lines and sharply delineated parts. There is no more fascinating point of comparison than the valet played by Raymond Walburn in Mr. Deeds Goes to Town, and Robert Greig’s butler in Sullivan’s Travels. They are both real characters; but greatly differing ones reflecting the personalities of their authors. Grieg’s speech in which he reproaches Sullivan for being what Michael McKean in the DVD commentary calls a “poverty dilletante” is the heart of the film.  Sullivan believes it’s an artist’s responsibility to change the world.  Even if Sullivan is, as Noah Baumbach describes him in the same commentary, as “dogged, pretentious and stupid.”

Paramount production chief William Le Baron had given Sturges pretty much carte blanche; but he had been replaced by Buddy De Sylva, who did not much care for Sturges’ vision, and stymied him. De Sylva was a song writer, hired because Bing Crosby was Paramount’s top box office star. We’ve encountered De Sylva before in this series; he wrote the songs and story for Just Imagine and was responsible for insisting nearly all Kurt Weill’s music be cut from Lady in the Dark. Sturges always had trouble from the Hays Office, in charge of film censorship. His sophisticated attitudes about sex were always a problem, but the Hays Office challenged his whole concept. “In shooting this picture, we strongly urge that you give serious thought to avoiding anything that could in any way reflect in a derogatory manner on Hollywood or on the motion picture industry, or that might cause us to be accused of deliberately befouling our own nest.” (Henderson). “Sturges learned just how far he could go, biting the hand that fed him.” (Jacobs). Director Sullivan’s silly comedy hit, which sends Veronica Lake’s character into a fit of giggles was called, Hey, Hey in the Hayloft, no doubt a dig at the Hays Office. One big objection to the film was the respectful way that the African American church congregation was portrayed. Perhaps the slapstick with the “colored” cook in the earlier sequence was a trade-off for the dignity of the later scenes. An executive officer of the NAACP wrote to praise Sturges for “the decent treatment of Negroes” in the church scene. 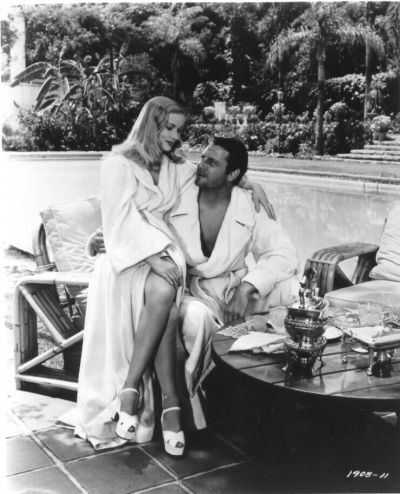 Sturges could have had any stars that he wanted but chose the rather modest talents of Joel McCrea and Veronica Lake. He told McCrea several years before, “Someday I’ll direct pictures, and you’re going to be in them.” When he told him that he’d written a film about a movie director especially for him, McCrea scoffed, “What do you mean? They don’t write scripts for me. They write them for Gary Cooper, and if they can’t get him, they take me.” They had an easy working relationship. Sturges wrote natural sounding lines the actor could remember, and McCrea admired Sturges ability to improvise, as when he wrote his real-life head cold into the script. 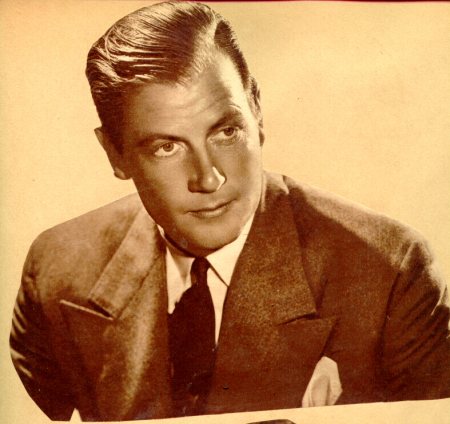 Lake was exquisitely beautiful, with a distinctive hair style that became so popular the government had to make safety films to keep her many admirers from snagging their “peek-a-boo” dos in defense plant machinery. In a handful of 40s films she epitomized the decade’s feminine mystique. Unfortunately, during casting she had omitted to mention to Sturges that she was pregnant, very pregnant. He and costumer Edith Head had their hands full disguising her 6 and 7-month belly and making sure that a double did all that might endanger her baby. In her autobiography The Dress Doctor, Head said of Lake, “Veronica was a girl who actually wore tweeds, flat heels, bulky sweaters, her hair pulled back into a hairnet. And this was the girl we transformed with a hairdo (long, blonde, floating over one eye) and clothes (long, floaty, unearthly chiffon) into a glamorous nymph, half witch. Veronica got a kick out of the transformation. ‘Pardon me while I put on my other head,’ she’d say. We’d created a personality that didn’t exist It was an experiment that proved what clothes could do. Once Veronica was through with work, changed into his own clothes and went out into the world, no one recognized her, ever.” Sturges seems to have played with this duality in his film. Although, once you know, she does look pregnant. 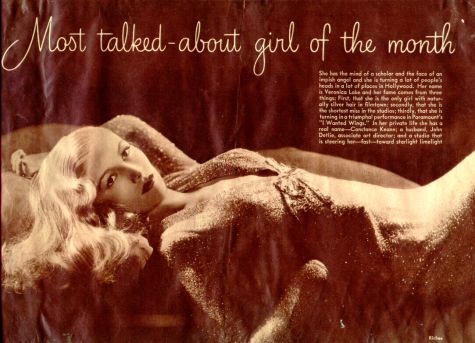 She has the mind of a scholar and the face of an impish angel and she is turning a lot of people’s heads in a lot of places in Hollywood. Her name is Veronica Lake and her fame comes from three things: First, that she is the only girl with naturally silver hair in filmtown, secondly that she is the shortest miss in the studios; thirdly, that she is turning in a triumphful performance in Paramount’s “I Wanted Wings.” In her private life she has a real name, Constance Keane; a husband, John Detlie, associate art director; and a studio that is steering her–fast–towards starlight limelight.

When the film was out “One local review wanted to know what the hell the tragic passages were doing in this comedy, and another wanted to know what the comic passages were doing in this drama. They were both right, of course.” (Sturges) He was purposefully filming a mish-mash of conventional genres, changing tack (he was a yachtsman, after all) and confounding audience expectations. “No one made better dialogue comedies than Sturges, primarily because no one wrote better dialogue. Sturges is one of those filmmakers whose one-liners are often as memorable as his whole films.” (Mast).

Although the film has been described as Sturges’ 8 1/2 because of its self-awareness about the movie business, in fact, the impulses are less modernist than lowbrow, an homage to the kind of anarchic comedy that was at home at Paramount. “These were movies where people joked from the screen about the movie they were in, shattering the ‘illusion’ that ‘serious’ movies work so hard at whatever it does, in any case, it never gets very far away from the movies. Just as Sullivan himself can never get out of Hollywood.” (Harvey)  Bob Hope and Bing Crosby in their Road movies, like Road to Morocco routinely broke the fourth wall.  And Sullivan, the director seeking seriousness, is caught by every slapstick pitfall, like catching his pants on a nail as he lowers himself out of a second story window.  But he also studied the hard-hitting Warner Brothers expose I Am a Fugitive From a Chain Gang. You may  remember that Sturges’ ending was appropriated by Woody Allen in Hannah and her Sisters. Those of you who have seen the Coen Brothers’ O Brother, Where Art Thou, can start counting up the homages to this film, starting with the irony that it IS a comedy, after all, and not a tragedy. Sturges loved goofy slapstick juxtaposed with stinging ideas, perfectly balanced, in Sullivan’s Travels.

The film was made at a time when America still loved itself, and the ideal of the virtuous common man held power.  Sullivan comes to realize through his own genuine hardship that laughter is powerful medicine.  As we drag ourselves through the third year of the COVID pandemic, just like Depression audiences, we don’t want to see the battle of capital vs labor on the screen (even with a little sex in it) but desperately need the potent escapism of laughter.

(Photo of Lake and McCrea from Jerry Ohlinger’s Movie Material Store, glamour portrait of Lake from anonymous movie star scrapbook, McCrea portrait from a different scrapbook. The McCrea archivist was meticulous about cutting around her photos, eliminating all captions. Sources include, Christmas in July by Diane Jacobs; Preston Sturges by Preston Sturges, edited by Sandy Sturges; Romantic Comedy in Hollywood by James Harvey; Five Screenplays by Preston Sturges edited by Brian Henderson, The Dress Doctor by Edith Head, Audio commentary from 2001 on the Criterion DVD by Noah Baumbach, Kenneth Bowser, Christopher Guest and Michael McKean)