Brittle Allure magazine editor Liza Elliott can’t shake her malaise and reluctantly enters psychotherapy, triggering a series of bonkers Technicolor dreams, including appearing in the most expensive costume in Hollywood history.  An infuriatingly patronizing shrink prods Liza to choose between work and home, and three men, symbolizing money, love and career.  “The plethora of many combinations of brilliant colors stamps the production as perhaps the finest ever turned out in tints” (Variety).

Lady in the Dark was a smash hit Broadway play. Paramount paid $283,000 for the rights in 1941, but had to wait until both the New York and road show runs were finished before filming began. This gave them plenty of time to plan, as the budget expanded to $3,000,000, making it the most expensive Hollywood film since Gone With the Wind. They could also buy supplies ahead of wartime rationing, a limitation constricting many films in the years ahead.

Playwright Moss Hart had been going through a long psychoanalysis with Dr. Gregory Zilboorg, who had analyzed George Gershwin and many other prominent show business figures. The result was a desire to end his successful playwriting partnership with George S. Kaufman (You Can’t Take It With You and The Man Who Came to Dinner) and strike out on his own. Hart had been boring all his friends with stories about his analysis, and he finally decided to write about it. One critic was to remark jokingly after the show became a Broadway smash that it was one way of getting back all the money Hart had paid Dr. Zilboorg. Lyricist Ira Gershwin had not collaborated with anyone since his brother George’s death two years before. German born composer Kurt Weill (The Three Penny Opera) had been in the US for nearly a decade. He needed a hit show and was ready to compose in a more popular idiom.

Stage star Gertrude Lawrence dazzled in the Broadway version as Liza Elliott, but was nearly upstaged by Danny Kaye as gay fashion photographer Russell Paxton, played (somewhat) straighter in the film by Misha Auer. In the circus dream, Kaye sang a patter song which became one of his trademarks, “Tschaikowsky and Other Russians” in which he speedily recites the names of 49 Russian composers. At the preview, thunderous applause greeted the conclusion of the song, and the authors worried that their star, about to sing “The Saga of Jenny” couldn’t top him. But, Lawrence rose to the challenge, bumping and grinding it to the complete devastation of the audience. In the film, “Jenny” is the only song to survive translation to the screen relatively intact. 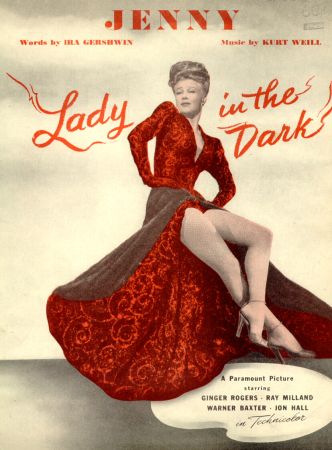 All the music in the play, originally titled “I Am Listening,” was in three dream sequences, like three little operettas, clearly differentiating between fantasy and reality. But, by the time Paramount was finished with it, very little of Hart’s concept or Weill’s score remained. The love duet, “This Is New” is heard only as played by a nightclub band. A major loss was the song, “My Ship” which is hummed by Liza and by ghostlike choirs, but never sung, even though it represents the breakthrough of Liza Elliott’s analysis. The song was recorded, but the producer, Buddy DeSylva, was a songwriter himself; he hated Weill and hated that song. You might well ask why he was producing the film version of a Weill musical, and I have no answer. By the time the film came out, “My Ship” had become a standard, and its omission seemed a stupid mistake. There is a wonderful cd on the Sony Classical imprint “Masterworks Heritage Vocal Series” of a 1963 Studio recording of the original score with opera singer Rise Stevens as Liza Elliott. This cd also includes Danny Kaye’s 1941 recordings of some of the songs, including his star-making, “Tschaikowsky…”

Lady in the Dark was the peak of both star Ginger Rogers and director Mitchell Leisen’s career. Neither of them would ever make as successful a film again. Director Mitchell Leisen had started in Hollywood in the silent era as a set and costume designer, and his detractors would say these are the most memorable elements in any of his films as a director. We recently showed his pirate extravaganza, Frenchman’s Creek. Although Edith Head and Raoul Pene du Bois are credited for the costumes, most of them are Leisen’s conception, including the mink-skirted outfit Rogers wears in the circus dream. Their collaborations were so close, that it is often difficult to assign credit for individual costumes.

Leisen had a budget of around $200,000 for Rogers’ wardrobe. Originally, the New York couturier Valentina was supposed to design her costumes, but Rogers nixed them, and Hollywood designer Head stepped in. Leisen supervised Head’s design of what was publicized at the time as the most expensive costume in film history, costing $35,000 with $15,000 on mink alone. There were two mink-skirted dresses. During construction, the floor of the workroom was covered with mink skins, and Head and Leisen chose them carefully for the camera. The first gown was lined with glass jewels, but was so heavy that Rogers couldn’t dance in it. A second dress was made with the sparkling lining in sequins, which are much lighter. The dress made of faux rubies and emeralds is seem when it is unpacked and in the nightclub, the seconds, sequinned dress is used in the dance number. The dress was constructed by the legendary Madame Barbara Karinska. The pattern was traced on sheets of wrapping paper and taken to a workshop in downtown LA for beading. The glass beaded version was donated to the Smithsonian, and the sequin version, which Head used in her fashion shows in later decades, appeared in the 2013 Hollywood Costume exhibit which originated at the Victoria and Albert Museum in London. 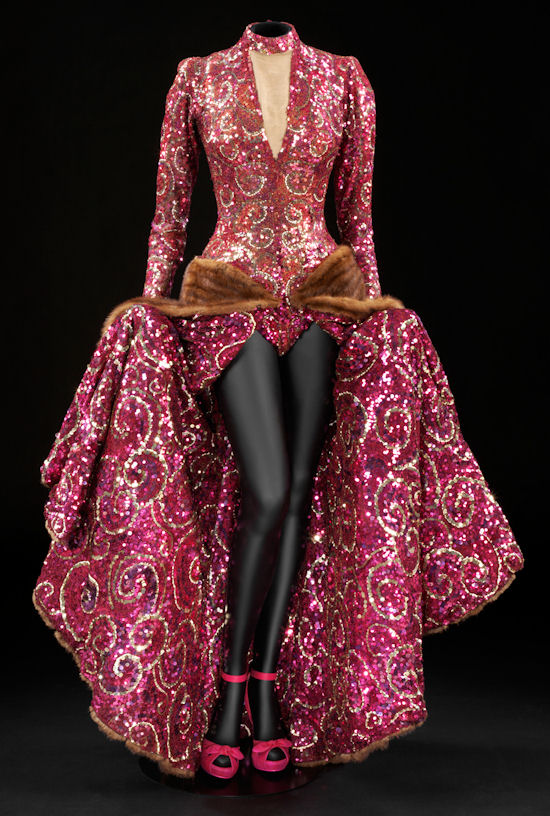 This is how the sequinned gown looked in the Hollywood Costume exhibit.

Rogers’ exquisitely tailored masculine suits were made at Mitchell and Haigue, a shop co-owned by Leisen. Ray Milland’s ringmaster costume, designed by Du Bois, was reconceived by Karinska, an expert at interpreting anyone’s sketches. Milland told David Chierichetti, “Madame Karinska was one of the few who could take one of Mitch’s drawings and figure out how to make it” (Head 80). 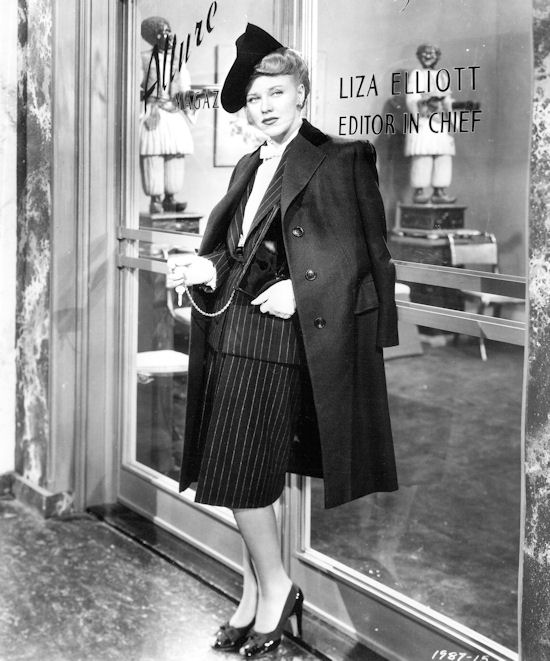 The key on the long key chain was an important symbol of both power and captivity.

Liza tells her dreams to an infuriatingly patronizing analyst and they are dramatized in hilarious and appalling Daliesque dream sequences that are the main appeal of the film today. Her first dream is blue, her wedding dream is gold, white and brown, and the final circus dream is an eye-popping kaleidoscope. The Technicolor lavishness of the film was the intense focus of Leisen’s attention, he designed it all, and agonized over every detail; the color schemes, the lighting and effects, even the way the chorus girls walked down a narrow catwalk shrouded in swirling dry ice, as well as the sets and costumes.

The monumental wedding dresses were designed by Raul Pene du Bois. As Rogers danced with Don Loper through the clouds of fog, the dry ice made the first dress dress so damp and heavy she could barely move. Sixteen wardrobe girls manned their ironing boards (in a circle?) between takes to attempt to dry it out for the next shot shot (Leisen 185). After her dance, she appears in an even more elaborate gown, which elicited gasps from the NCMA audience in 2016. 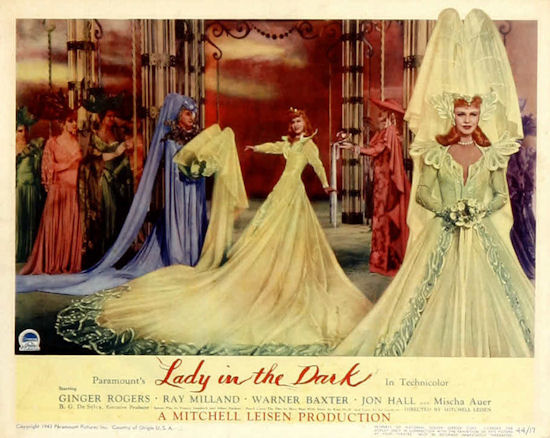 This is only a hint of how amazing this gown looked on screen.

The perfectionist focus on the visuals means Leisen was less interested in the performances. Ginger Rogers was a practicing Christian Scientist, and had no sympathy whatsoever with psychiatry or those, like the writer and director, who benefited from it. The scenes in the analyst’s office were a complete mystery to her. Interestingly, just as Rita Hayworth did in Cover Girl Rogers took time off in the middle of production to get married, although she was a big enough star to shut down production for two weeks, instead of coming back the next day, as Hayworth did. David Chierichetti’s book, Mitchell Leisen: Hollywood Director is filled with wonderfully catty accounts of the struggles to film Lady in the Dark. 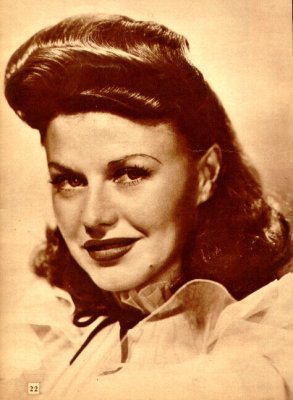 Ginger Rogers wore her hair in a high pompadour for much of the 40s, here without the side rolls. Audience members observed that perhaps Liza’s headaches would disappear if she loosened her severe hair style.

This gorgeous film version has many pleasures, but I don’t think I will be alone in saying Ray Milland, at minimum, needs a good shaking. He constantly criticizes Liza for working (and even worse, for being successful) and of course Freudian analysis backs him up. His ideas for changing Allure magazine are terrible! At the 2000 North Carolina Museum of Art screening of Lady in the Dark, this film really riled up audience members unable to place Milland’s character’s attitudes firmly in the dustbin of psychiatric history, where they belong. If the three men in this film, as in Cover Girl, represent money, love and career, must we grit our teeth and consider her final choice a tad feminist, in spite of her embrace of the opinions of sexist men?

Lady in the Dark used to screen on AMC in the days when they showed old movies, but has never been available on a legal VHS tape or DVD. My pirated DVD copy from eBay was a murky transfer from what appeared to be an old VHS tape of an AMC screening, in other words, exactly what I expected. Leisen must have been spinning in his grave; what a shame that the public record of his beautiful film looks like a green and brown smear.

But, in July of 2015, the Museum of Modern Art showed a sparkling 35mm print of Lady in the Dark, and I flew up to NYC just to see it. The color is spectacular, the details of all the production design exploding off the screen. The MoMA audience roared at the Freudian analysis, which remains entirely unimproved by the passage of time. And, here it is again, in all its glory, sixteen years after my first screening at the North Carolina Museum of Art, embraced by an audience sharing a love for visual excess and staggeringly Neanderthal psychiatry.

(Sketch from Edith Head’s 1959 book The Dress Doctor; supposedly by her, but she rarely did her own finished sketches, so I doubt it. Portrait of Ginger Rogers in her fabulous waved pompadour hairstyle from the January, 1942 Silver Screen. Sheet music cover from Moviediva’s collection. Sources include Mitchell Leisen: Hollywood Director and Edith Head by David Chierichetti, the liner notes for the cd referred to in the text, Hollywood Costume by Deborah Nadoolman Landis, Edith Head by Jay Jorgensen, NY Times, March 14, 1943 column by Fred Stanley (thanks, Marsha Gordon!)