An “Old Dark House” comedy from 1927 filled with ghosts, bodies and the reading of the will is retooled into the first “Bob Hope” movie, taking full advantage of his wisecracking coward persona. “He swans on stage most often in impeccable double-breasted suits, his hip swiveling swagger a reminder that he was a pretty good vaudeville hoofer, his gleaming eyes beaming the promise that his brain is filled with snappy gags and that any woman in sight is fair game for merciless flirtation. It’s a meticulous creation, intensely self conscious yet blithely debonair” (Tucker).

Bob Hope was born Leslie Towns Hope in England in 1903, one of a family of seven surviving sons. His alcoholic father was a stonecutter by trade who followed his brothers to Cleveland, Ohio, in search of work. When his family joined him, they discovered his employment was irregular, and eventually wife and sons were drafted to make ends meet. Hope would say later, “I came from a pretty tough neighborhood. We’d have been called juvenile delinquents, but our neighborhood couldn’t afford a sociologist.” (Faith). Hope dropped out of school with no intention career plan, except perhaps to be a movie star like Douglas Fairbanks. A failure as a featherweight boxer, he landed a job as half a male dance team in very small time vaudeville. At one point, he and his partner were hired to dance with the Hilton sisters, a pair of Siamese twins. Hope and Byrne billed themselves as “Dancemedians” and Hope’s career took a strong turn upwards when his improvised patter while acting as an emcee for a show provoked laughs. Eventually, he hit the big time in vaudeville.

Hope was a Broadway smash in the Jerome Kern musical Roberta. The original book had few laughs, and Hope was encouraged to add whatever he could to lighten the mood. His success as a stage actor was insufficient for him to recreate his role in the movie where he was replaced by Fred Astaire. Hope would have to be satisfied for now with being a Broadway headliner and a successful radio star, his glib monologues on the Pepsodent Show creating a fresh image in the new medium.

His first film appearance was in The Big Broadcast of 1938 (which introduced his signature tune, “Thanks for the Memory”), but afterwards Paramount shuttled him into a succession of limp B pictures. He made a splash emceeing the 1938 Academy Awards, the beginning of a long tradition in that role. Variety called his Oscar patter, “flip and fresh, yet friendly and intimate” descriptive of his whole career. He was naturally funny, but he also had a team of gag writers (whom he acknowledged, unlike most comedians who wanted to be thought of as coming up with all the jokes on their own) and an extensive file of humorous material. He archived this file, and saved virtually every piece of paper documenting his career. His files were left to the Library of Congress, where they can be accessed on line.

The Bob Hope persona crystallized in The Cat and the Canary, thanks to the efforts of his radio gag writers, who exaggerated his skirt-chasing and egomania and added the spice of cowardice to his seemingly off-the-cuff wise-cracking. His favorite review read, “Paramount here has solved neatly for itself, exhibitors and customers, the heretofore perplexing problem of what to do with Bob Hope, admittedly one of the funniest comedians who ever faced a camera, yet never until now the surefire laugh-getter on the screen that his following knew him to be in fact.” (Faith) It’s hard to believe that when he got to Hollywood, he was advised to have a nose-job to be more conventionally handsome. He resisted strongly, and of course, his distinctive profile has been an integral part of his comic act. Bob Hope made over 50 movies, and from 1941-1953 was in the top 10 box office draws for all but one year.

The Cat and the Canary was part of a cycle of Old Dark House comedy melodramas, like The Bat and The Gorilla, that had long been popular on stage. The mixture of thrills and laughs were comedy staples; haunted house comedies were made by Harold Lloyd, Buster Keaton, Abbott and Costello and many others, straight through to more recent ones like The Rocky Horror Picture Show. This film was a remake of a silent The Cat and the Canary starring Laura LaPlante and Creighton Hale, quite a close remake in the case of some of the “thriller” scenes, although Hope’s character replaced the earlier style of comic hero played by Hale.

John Beal, one of his co-stars said, “Nobody gives Bob credit for the extraordinary discipline and precision of his style. It was a pleasure to play with Bob, because he was always on top of things, and moreover, always there for his fellow actors. I kept hearing stories of his upstaging people, and always trying to hog the action, but I never found him that way. He knew ensemble playing backwards and forwards and actually inspired the people acting with him in his scenes to give their best, and when they did, he saw to it that they got their minute or more in the sun.” (Quirk).

His romantic interest in this film was the beautiful and spunky Paulette Goddard, who had pretty impressive comedy credentials herself. Paulette was a Ziegfeld girl at 14, and met legendary silent film comedian Charlie Chaplin in 1932, and she married him secretly either in 1933 or 1936 (or not at all, according to some accounts). She starred with him in Modern Times and The Great Dictator. Hope said hello to the couple at the racetrack one afternoon and told Chaplin that he enjoyed working with Paulette and that he was an admirer of Modern Times. Chaplin gave him one of the few compliments Hope never brushed off with a wisecrack, “Young man, I’ve been watching the rushes of The Cat and the Canary every night. I want you to know that you are one of the best timers of comedy I have ever seen.” (Faith). 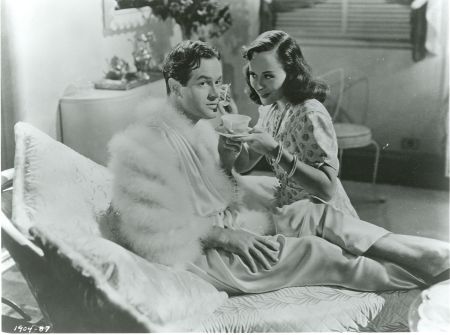 The film was such a big hit that Paramount rushed Hope and Goddard into a sequel that was of course, not as good, Ghost Breakers. Neil Sinyard wrote, “In Hope’s persona of the sexual braggart, the devout coward, the man who uses his wit to hide his insecurity, one can see many anticipations of the early Woody Allen.” In fact, Allen has said that his interest in comedy was created when he saw Road to Morocco and that his idea of a perfect weekend would be half a dozen Bob Hope films.

Before Bob Hope became the Bob Hope we all recognize, he made a series of 2-reel comedy shorts at the Warner Brothers Studio in Brooklyn. Three hardworking days resulted in 20 minutes of finished film. Movie studios had branches in NYC to take advantage of stage actors, who could squeeze in working days making a movie while still treading the boards at night. The Library of Congress has provided one for this evening, “Shop Talk.”