A grim Soviet functionary finds herself strangely susceptible to a suave Capitalist playboy and a mad, mad Paris hat.  Garbo’s first comedy (penned by Billy Wilder) is “a gay and impertinent and malicious show which never pulls its punch lines …and finds the screen’s austere first lady of drama playing a dead-pan comedy role with the assurance of a Buster Keaton” (Time Magazine).

Greta Garbo had been a huge silent film star in a series of glamorous melodramas, like Torrent. In 1930, her talkie debut delayed more than almost any other silent star, she played the title role in Eugene O’Neill’s Anna Christie.  “Give me a whiskey.  Ginger ale on the side.  And don’t be stingy, baby” were her first words on screen.  “Garbo talks!” was all the advertising needed to say.  In the mid-1930s Garbo seemed to be typecast as a tragic heroine playing, Anna Karenina, Camille and the Empress Josephine in Conquest. European markets for her films were slipping away as war began to engulf the continent. At first, a project in which she played Nobel Prize winning scientist Marie Curie was proposed, but then, the studio had second thoughts.  She had two more films on her contract, and MGM wanted her to take a break from filming, then return to the screen in a comedy.  Ninotchka’s romantic liberation would transform Garbo’s career much as The Philadelphia Story would transform Katherine Hepburn’s. 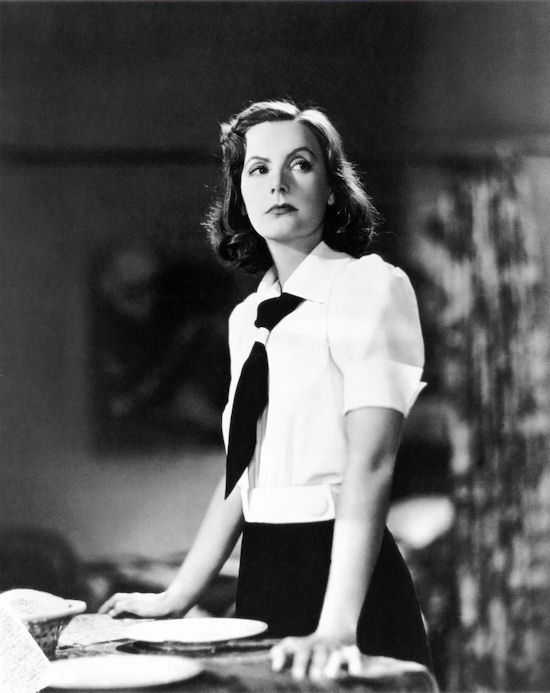 The germ of Ninotchka was a story called Love is Not So Simple by Melchior Lengyel, about bartering Russian furs for French machinery.  The high concept was a three sentence note: “Russian girl saturated with Bolshevist ideals goes to fearful, capitalistic, monopolistic Paris.  She meets romance and has an uproarious good time.  Capitalism not so bad after all” (Sikov 134). The original treatment, and a subsequent one by Gottfried Reinhardt were not particularly amusing, but a reboot by Ben Hecht and Charles MacArthur seemed much more promising.  Garbo might co-star with William Powell or Gary Cooper.  Then, the studio thought Cary Grant might be the perfect match, which alarmed censor Joseph Breen at the Production Code Administration. This couple would be far too combustible on screen as romantic partners: sexual affairs were deemed completely unsuitable for comedy, as sex must be shown to be morally wrong (Sigh).  So, then what would be the point of pairing these two iconic actors?  Enter, Melvyn Douglas.

George Cukor was going to direct the film, but he was reassigned to Gone With the Wind. Garbo then asked for Ernst Lubitsch; although she had reccently taken a massive salary cut, she still had approval of director and cast.  He began working on the script with Walter Reisch and Billy Wilder and Charles Brackett.  Lubitsch had recently returned from a trip to the Soviet Union, and his inspiration ignited the collaboration.  “I feel it is wicked that Billy Wilder and Walter Reisch and I are even mentioned in connection with Ninotchka.  It was so much Ernst Lubitsch’s own baby.  He was a director in a creative frenzy at the time, and everything he did was to me wonderful and funny and stimulating…Walter Reisch made a great contribution in the pattern of the picture, and I got Ernst’s ideas into English, but I give him the full credit for the picture” said Charles Brackett (Swenson 389).  In fact, after wrestling with what in Ninotchka’s life was going to facilitate her transformation, it was Lubitsch who announced, “Boys, I’ve got it. I’ve got the answer. It’s the hat” (Sikov 135). 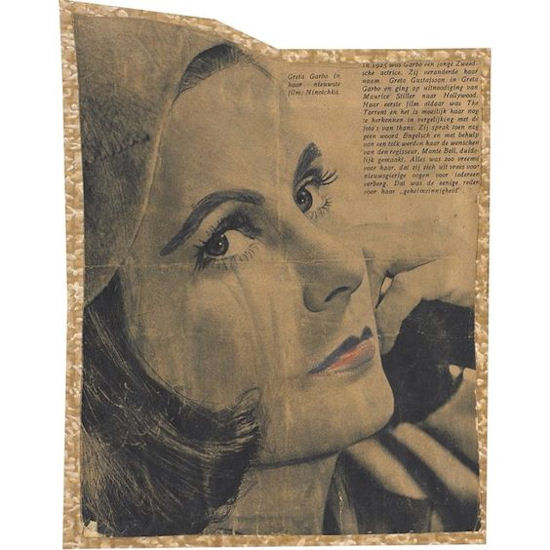 One fan of Greta Garbo was Anne Frank. She cut this picture out of a Dutch newspaper and pasted it (and did she color the lips and eyebrows?) on the wall in the attic where she and her family hid from Nazi deportation.

For the last time she would be photographed by William Daniels, who was vital to her creating her image on the screen.  There were 10 days of rehearsals and costume fittings; it was also her last complete collaboration with Adrian, who had dressed her in a succession of amazing clothes since 1929.  Garbo agonized over her acting, and relied on Lubitsch’s support, and he knew just how to guide and advise her.  She found his gregariousness alarming, but he tailored his manner to reassure her.  “I love to work with her.  She’s got no phoniness, no star allures.  She is the only star I ever worked with I did not have to drag away from the mirror” said Lubitsch to a reporter (Swenson 392). She returned the compliment by recalling him as her only great director. He knew she was funny in private life, and he thought even her tragic roles had humor “Most of them are so heavy…but she was light, light always, and for comedy nothing matters more…and it doesn’t hurt if they’re beautiful” (Harvey 385).

Douglas thought that part of the magic of her performance in the film was that she was not a native speaker of English and so interpreted the emphasis in the script a different way.  Her comic performance was perfect, “not so much because of any comic sense she may have had as through the genius of the director Ernst Lubitsch; he knew just how to make use of the stolid Scandinavian in her” (Swenson 392).  And, casting Ina Claire at the Grand Duchess Swana also incorporated some real life agitation. John Gilbert,  the great love of her life, whom she deserted at the altar in 1929, married Claire on the rebound.  The sharp edge of their rivalry does appear on screen. 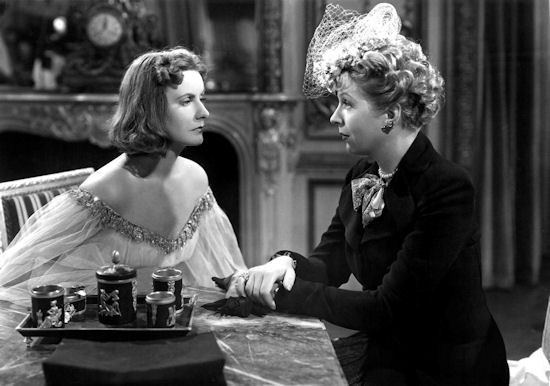 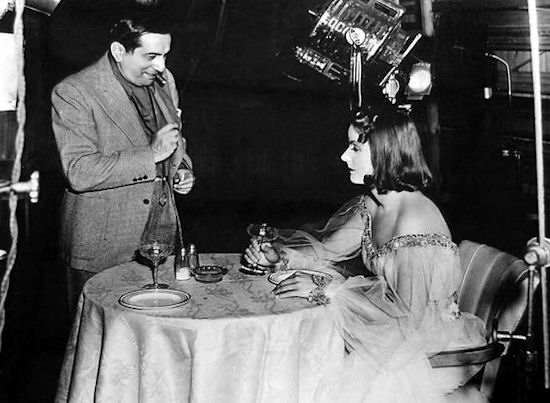 Gilbert Adrian Greenberg dressed Garbo from almost the beginning of her career.  Their collaboration was one of the great designer/star image creations in cinema history.  Garbo had not done a modern dress film in five years when she appeared in Ninotchka.  Her wardrobe tells the story of the film, in best transformative style.  She spoofs her on and off screen image (insisting in one scene that she does not want to be alone) and trades her practical headwear for a Schiaparelli-inspired millinery confection.   Adrian said, “It’s a little bit of a hat—a crazy little hat.  She wears it in a lot of sequences in the picture, but I hope women generally don’t adopt it because it wouldn’t look good on them.  In fact, it wouldn’t look good on anybody but Garbo.  It’s tailored to her character and individuality.  There are plenty of Garbo gowns that can safely become the fashion.  But, not the hat” (Gutner 98).  It’s about character, not fashion. 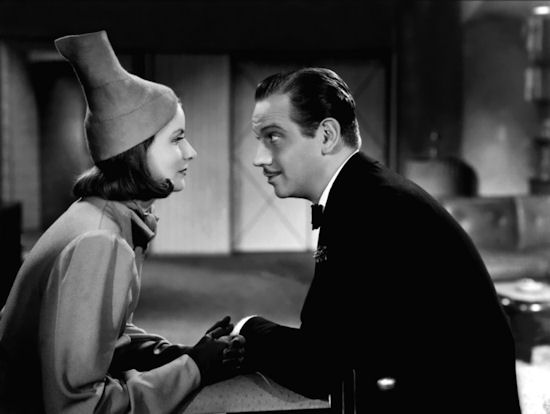 Ninotchka was filmed in June and July of 1939, but by the time it was released, it was already out of date. The Nazis had invaded Poland and global catastrophe loomed, which makes Ninotchka bittersweet.  MGM quickly arranged to get Garbo’s family out of Sweden. The introductory title was to alleviate the confusion of the quickly evolving political landscape. Ninotchka was quite a radical film, as it was a satire both of capitalism AND communism. 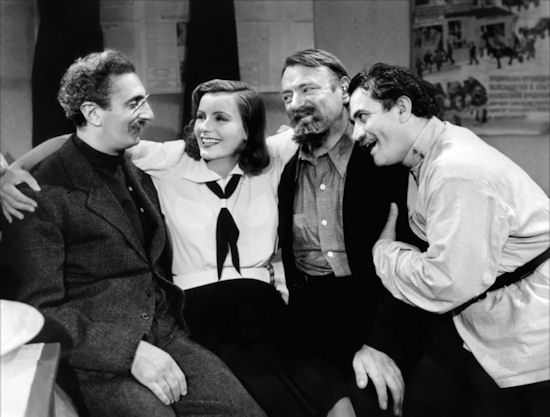 This was her fourth and last Oscar nomination (she lost to Vivien Leigh’s Scarlett O’Hara). The film was banned in Communist countries, also banned in (Vichy?) France until 1947.  But, it was a huge hit.  Garbo Laughs said the tagline, sometimes larger than the title of the film.  And audiences did laugh, drowning out the dialogue.  Frank S. Nugent wrote in the New York Times, “(Ninotchka) finds the screen’s austere first lady of drama playing a dead pan comedy with the assurance of a Buster Keaton.  It must be monotonous this superb rightness of Garbo’s playing.  We almost wish she would handle a scene badly once in a while just to provide us with an opportunity to show we are not a member of a fan club.  But, she remains infallible” (Swenson 396). 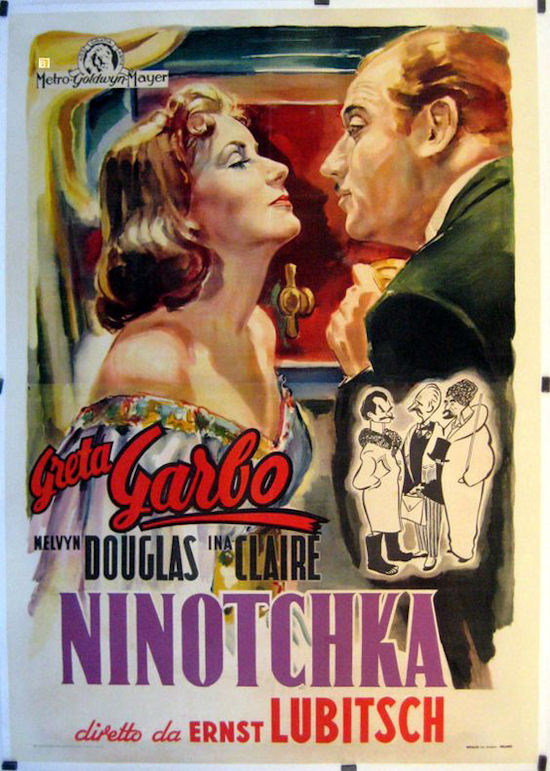 Greta Garbo: A Life Apart by Karen Swenson.  Ernst Lubitsch’s American Comedy by William Paul, Gowns by Adrian: The MGM Years 1929-1941 by Howard Gutner, Romantic Comedy in Hollywood: From Lubitsch to Sturges by James Harvey, On Sunset Boulevard: The Life and Times of Billy Wilder by Ed Sikov