A Soviet submarine runs aground on a New England sandbar, and panic-stricken townies and Russian sailors alike fear an accidental start to WW III.  This political satire asked audiences in the grip of Cold War fear to look the enemy in the eye, and recognize his humanity.

The Governor’s Club  shows a great affection for the work of director Norman Jewison.  Last year, you screened The Cincinnati Kid, and this year, Russians.  Heads up, his 1967 film was In the Heat of the Night.

Director Norman Jewison was intrigued by the premise of a comic novel by Nathaniel Benchley called The Off Islanders, and optioned it with his own money.  When he comissioned the script from William Rose (The Ladykillers, It’s a Mad, Mad, Mad, Mad World, Guess Who’s Coming to Dinner)  it was only two years after the Cuban Missile Crisis, and a short time since the blacklist of Hollywood writers for alleged Communist sympathies had been broken (by Kirk Douglas and Spartacus in 1960). The creative team, which included producer Walter Mirisch, wanted to make a strong political statement, under the guise of “it’s only a comedy.”  The film was a huge hit (and made Arkin a star) but the film lost its bid for the Best Picture Oscar to A Man for All Seasons.

A Russian submarine commander (Theodore Bikel, speaking only Russian) runs his craft aground while hoping to catch a glimpse of America through his periscope.  Alarmed, he sends a landing party to scout for a power boat to dislodge the sub, led by Lt. Rozanov (Alan Arkin) and complications ensue.

The cast of first rate comic actors is a major asset.  Jewison wanted Jack Lemmon to play the harried playwright whose isolated summer cottage is the first stop for the Russian scouts.  He said no, and Jewison then asked his friend, Carl Reiner, writer and performer on Sid Caesar’s comedy hour, and the creator of The Dick Van Dyke Show.  His wife is played by Eva Marie Saint, Brando’s leading lady in On the Waterfront, and Cary Grant’s amour in North by Northwest.  The fact that she would take such a “little wifey” role indicates the status of a 42 year old actress in 1960s Hollywood.  But, William Rose thought that she was the only character in the film who had any sense, and perhaps that’s why she agreed to take the part. Supporting roles are played by the always hilarious Jonathan Winters,  blustery Paul Ford,  English music hall performer Tessie O’Shea and a slow burning Brian Keith, as the sheriff attempting to corral his highly unregulated  townsfolk  militia.

Arkin, a stage actor in his first movie role, is the exasperated Lt. Rozanov,  unsure whether charming or bullying the Americans will have greater effect.  Arkin had wanted to be an actor—a character actor—since he was five years old.  Unable to make a living in New York, in desperation he took his wife and young child to Chicago and joined what became the original Second City troupe.  He found his niche as a quick-witted improvisor, often with various accents.  Director Norman Jewison had seen him on Broadway in a play (Second City jolted careers) and wanted him for the part.  Because he was an unknown, the producer balked, but Jewison auditioned him with an improvisation where a Russian spy tries to convince his interrogators that he is really with the Bolshoi Ballet.   Although  he riffed in gibberish, for the film Arkin was coached by a UN translator, and is really speaking Russian.  He won a Golden Globe for the role, and was nominated for an Oscar.  This began a very hot part of his career, where he terrorized Audrey Hepburn in Wait Until Dark, was the lonely deaf mute in The Heart is a Lonely Hunter, and played Capt. Yossarian in Catch 22.  He was Oscar nominated four times,  for Russians, Hunter and Argo, he won in 2007 for Little Miss Sunshine.

In his memoir he wrote, “One of the things that attracted me to the project was its strong social statement.  We were smack in the middle of the cold war at the time, and the film had the audacious message that Russians were human beings, pretty much like us.  It sounds inane now, but at that moment in our history the Soviet Union was so demonized that making a movie that challenged that view was actually a pretty courageous thing to do.  I think most of us in the cast were in accord with that mission, and it helped us band as a group.  We very much expected a backlash of some kind, but to our amazement and delight, when the film came out, it was as if the whole country breathed a sigh of relief.  The relief was reflected in the reviews, and in the way people approached us—there was no backlash at all.  It turned out that most of the country seemed to feel the same way we did, and hadn’t had the courage to come out and say it”  (Arkin 69-70).  Arkin discovered he loved film, since he hated acting in front of an audience and the monotony of a play’s long run. He continues his long career, with over 100 roles on film and tv.

(This was too big for my scanner)

John Phillip Law and Andrea Dromm have a cross cultural Romeo and Juliet romance. They share a dreamy beach walk, uncaring of politics.  Although it’s only the beginning of the hippie era, their message of peace and love shows a way forward for the warring factions.  There is no talk of Communism and Capitalism in the film, intentionally. The Russians do not display any dissatisfaction with their country, and do not show any desire to defect, even though Alexi may be sorely tempted after a few chaste kisses from his new sweetheart.

Although the film has a strong sense of place, it was shot, not on a Nantucket-y island off the Massachusetts coast, but in Ft. Bragg, California.  Production designer Robert Boyle was tasked with making the California beach town stand in for a chilly New England island.  He put up false fronts on the houses, scattered lobster traps and changed license plates.  The biggest problem was the submarine. Jewison wrote “Today, of course, you can probably buy an old Soviet sub on the internet” (Jewison 122) but when they asked the U.S. Navy for the loan of one of theirs, the Navy refused.  They said an enemy sub could never run aground without them knowing about it, even though one had recently sailed right into San Francisco Bay seeking aid for a crewman with appendicitis.  The Canadian Navy had a World War II German sub to lend, but the Navy wouldn’t allow it within 12 miles of the coast.  A 180 foot plywood and foam replica was created by Boyle, with a conning tower rented from 20th Century Fox.  So many locals were extras that Jewison invited the whole town to watch the dailies in the local movie house, which they did, with great enthusiasm.

Composer Johnny Mandel blends American patriotic songs with Russian ones symbolizing the culture clash, underlined by the strong graphic design of the titles by Pablo Ferro, who came up with the clashing anthems theme.   Some 1960s comedies have a very slow pace by contemporary standards, but even at over 2 hours, this one moves right along, thanks to editor Hal Ashby, who would later be a director, himself.

When the Russian ambassador to the US heard that a film had been made in which the Russians were not villains, he asked for a print to be sent to the Embassy.  It travelled across Europe from one Russian embassy to another, and finally was screened in the Kremlin.  Jewison was invited to attending a screening in Moscow, at the Soviet Filmakers Union.  He could attend in the middle of the Cold War because he was Canadian, not American, one of the few Hollywood directors ever invited to Russia.  The film was screened in a huge theater, with many of the most prominent Russian filmmakers in attendance.  At the end, they got to their feet, clapping, some weeping, showing Jewison it was just not the Americans who were hoping for reconciliation, but that it was a universal hope between both nations.  Perhaps, it may have taken a small step towards thawing the Cold War. 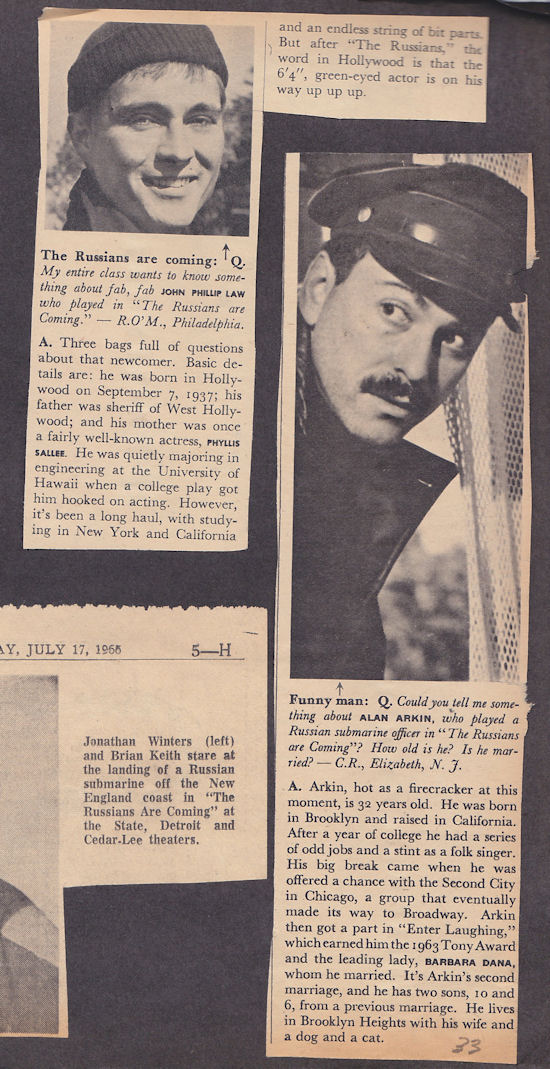 “I wish not to hate anybody” the hunky Russian sailor played by Law tells the wholesome teen babysitter.  “No film of the era so sharply depicts tensions between deep-seated American anti-Communism, and a yearning for accommodation with the Soviet Union—which just might provide a respite from fears of nuclear war” (Strada and Troper 96).  We all remember the terror that accompanied the Cuban Missile Crisis, a moment where it seemed that the planet was on the brink of annihilation.   I remember a Friday in middle school (probably about the time this film was made) when my teacher said he wasn’t assigning any homework, because we would all be dead by Monday.  The duck and cover drills, and other anti-Soviet messages caused me to have nightmares, and I know I was not alone.  This film emphasized that humanity had to wake up and realize there would be no winner in a nuclear war.  Both the home-grown militia and the heavily armed Russian sub become paralyzed when they realize the consequences of following through with their bellicose threats.

“No other film of its time so elegantly and benignly deflates the puffed up anticommunism of the 1950s” (Strada and Troper 111).   Recent DVD reviews of the film talk about it being quaint, and being a gentle comedy.  But it was anything but, when it came out.  And, the theme of refusing to acknowledge an enemy’s humanity is forever topical.  I challenge you to substitute another disparaged minority for the Russians, and try visualizing them as equally human. 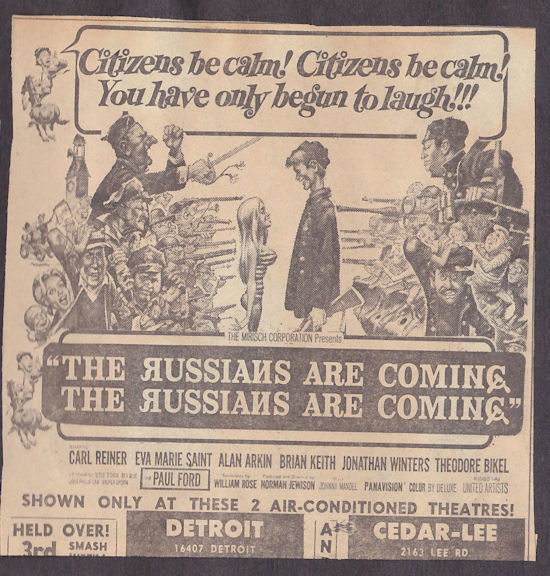 This poster was illustrated by Mad Magazine artist Jack Davis.

Sources include DVD extras, Russians in Hollywood, Hollywood’s Russians by Harlow Robinson, Friend or Foe? Russians in American Film and Foreign Policy 1933-1991 by Michael J. Strada and Harold R. Troper, I Thought We Were Making Movies, Not History by Walter Mirisch, An Improvised Life: A Memoir by Alan Arkin, This Terrible Business Has Been Good to Me by Norman Jewison.

All images from my teenaged scrapbook.