Tell It To The Marines stars Lon Chaney wearing his own face. It is a beautiful face. Deeply lined, eyes slightly mismatched, bottom teeth crooked; sensitive and revealing. Chaney usually performed in one of his extraordinary make-ups. The autonomy he was allowed at Universal, MGM and other studios to exploit his unusual gift seems inconceivable today. Shunning publicity and public appearances, he preferred to keep his own personality submerged in his gallery of often grotesque screen characters. He said, “Between pictures, there is no Lon Chaney.”

Tell It To The Marines is a prototype for many films about the armed services, in peace and war. A callow youth discovers his backbone in a rigidly structured environment, mentored by an uncompromising father figure. There’s often a girl, somewhere, for a futile stab at feminine interest, but these triangles are not about two men and a woman but about two men and the military.

The great appeal of this film is closely linked to its two stars, Lon Chaney and William Haines. Since Lon Chaney’s real appearance was seen so rarely, it has the quality of a disguise. Silent film acting is reliant on a performer’s fluency in screen-filling close-ups. A child of deaf-mute parents, Chaney “had a deaf face” meaning he could communicate eloquently through his facial expressions. His more monstrous characters put the secret fears and desires of his audience on the screen. But science fiction author Ray Bradbury suggested that Chaney’s characters often suffer from unrequited love, prompting a different kind of audience identification, or as David Skal and Elias Savada put it in Dark Carnival, their biography of director Tod Browning, a “martyrdom of enforced chastity.” In Tell It To The Marines, Chaney creates a deeply humane man, set apart from 70 years of “tough guy with a heart of gold” cliches. 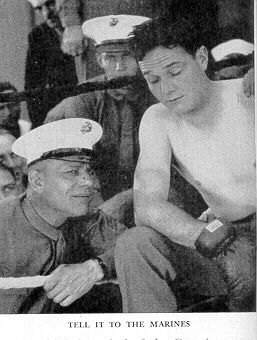 Film historians continue to ponder Chaney’s immense appeal for movie fans in the twenties. David Skal’s writing on horror films is always insightful. He suggests the unprecedented numbers of maimed veterans returning from the trenches of WW I, men who would have died in earlier wars, demanded a public way of dealing with the deformities that beloved fathers and sons brought home. Gaylyn Studlar in her book about male movie images in the 1920s (This Mad Masquerade) discusses Chaney in her most interesting chapter. She says that freak shows were still extremely popular entertainments during the 1920s. Tod Browning, who collaborated as a director with Chaney in some of his most disturbing roles, had not just been a carnival barker, but had performed as a freak himself, The Hypnotic Living Corpse. In freak shows, there was the come-on, the show itself and then the “blow off,” the last revelation, after which you got rid of the suckers. Studlar argues that many of Chaney’s films were structured to lead to this “blow off” most noticeably The Phantom of the Opera, where Erik is unmasked, not for the heroine’s benefit, but the audience’s. Both these theories are interesting, but perhaps the key to Chaney’s popularity lies simply in his dramatic understanding of his characters’ psyches.

William Haines plays a Marine Corps sheik with his characteristic impudence. Tell It To The Marines cashed in on his great success as a raccoon-coat slacker in Brown of Harvard. The two similar “make a man of you” plots may have had an insider subtext, since Haines lived an openly gay lifestyle in Hollywood. Haines never took his career entirely seriously. Perhaps this is why his acting still has a freshness today (and his characters are plenty fresh, too). He takes some rather wild chances: which other silent screen hero have you seen picking his nose?

Noble Nurse Norma Dale is played rather colorlessly by Eleanor Boardman. She and Haines had both been “New Faces of 1921”; the prize, a contract with Goldwyn Studios. Boardman was more serious about her acting career than her New Faces companion and her career took off while his coasted. She married director King Vidor in 1926. He would direct her in her greatest role in The Crowd, and Haines in his greatest, Show People. Boardman and Haines would become lifelong friends. He wrote, “Perhaps the fact that we came into pictures at the same time created a bond between us. We had the same early struggles, the same heartaches and disappointments. I admire her tremendously. She’s such a real person.” Boardman, interviewed by William Drew in 1980 (Speaking of Silents), said of her career, “I was never enamoured by working in films, and I think that is one reason why I don’t remember much about them. Except for The Crowd, I really am not proud of anything I did. I sometimes think I didn’t know what I was doing–I just did what I was told. I was in and out of the studios so many times I couldn’t tell one picture from another. I never stopped working and I was happy when it was all over.” 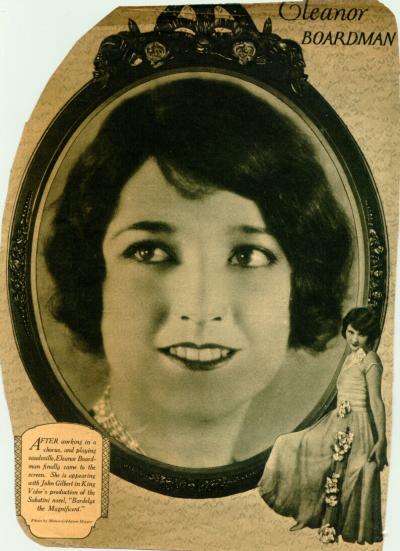 Much has been made about the unusual cooperation the US Marines extended to MGM in the creation of this film, including the use of the Marine Base in San Diego. This is most evident in the sequence at sea with the actors on the deck of the USS California, in the background steam more destroyers. Soon, the cast will participate in a real target practice. The advisor for the film was the San Diego base commander, General Smedley Butler. A legendary tough as nails Marine; he and Chaney became friends. Butler never fought in a major war, but won two Medals of Honor fighting in skirmishes around the globe. General Douglas MacArthur described Butler as “one of the really great generals in American history.” This film is unequivocal in its approval for the Marines (and vice versa). Chaney was even made an honorary Marine. Interestingly, by 1935, General Butler had second thoughts, feeling Marine deployments were often used to protect American banking and commercial interests, and described himself during his military career as “a racketeer for capitalism.”

Tell It To The Marines was directed by George Hill. He was a friend of MGM’s top scriptwriter Frances Marion and her husband, cowboy star Fred Thomson. In 1930, he married Marion, after the tragic death of her husband. Hill would direct some of her great scripts in the early 1930s, Min and Bill, The Secret Six and especially, The Big House. Lon Chaney was supposed to play the scary convict in The Big House eventually played by Wallace Beery. After Chaney’s death from lung cancer, Marion retailored the role for Beery. In Tell It To The Marines, there is a foreshadowing of how Chaney might have played it. Hill’s direction of the male actors and the climactic action scene in this film is exciting and assured; perhaps a lack of interest in Boardman’s character is the reason for her limply decorative performance.

Tell It To The Marines is a superb example of the brilliant accomplishments of the late silent era. Just look deeply into Lon Chaney’s eyes. 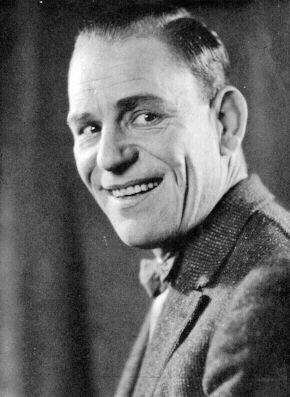 Michael F. Blake is Chaney’s most devoted fan and dedicated researcher. I used Lon Chaney, The Man Behind the Thousand Faces for this essay. William J. Mann’s biography of William Haines, Wisecracker, is one of my film book favorites. The information about General Butler is from a 1985 Village Voice article and don’t ask me why I saved it! Be sure and see the Kevin Brownlow documentaries on Lon Chaney and Universal Studios on TCM when they are shown again.

(Photo from film from a December, 1953 career article on Chaney in Films in Review: note uncharacteristic “farmer tan” on hero…makeup? Eleanor Boardman photos from a collection of anonymous clippings, c. 1927. Portrait of Chaney c. 1927 from Daniel Blum’s A Pictorial History of the Silent Screen (1953).