Nothing about the magazine story “Night Bus,” by Samuel Hopkins Adams, indicated it would become a much imitated comedy landmark. Adams, a prolific writer of short fiction, novels and biographies, published two magazine stories about women and buses in 1933. Capra may have seen the earlier “Last Trip” about two lost souls meeting on a bus, but it was “Night Bus”, about a runaway heiress and a poor but blueblood inventor that inspired him. In the story, Peter Warne is a college-educated chemist, so Capra and writer Robert Riskin decided to remake him as a tough-talking reporter. An even greater challenge was making a spoiled heiress palatable to Depression audiences. Riskin and Capra emphasized, not the spoiled brat that Peter first sees, but an unwillingly pampered princess, aching to make a break for freedom. The incidents in the film were almost all in the story, including the Walls of Jericho, but Riskin’s feeling for character and his unerring instinct for cinematic adaption transformed them. And, a ladies’ man himself, he had a knack for romantic scenes. He hated sentimentality and thought courtship should be casual, and he liked his heroines resilient as well as seductive.

Capra wanted Robert Montgomery for newshound Peter Warne, but he refused, having just made a bus picture, a not very successful one called Fugitive Lovers. There are some plot similarities between the two films, but Fugitive Lovers is not a comedy, even though there is some comic relief provided by Ted Healy and the Three Stooges (Larry, Moe and Jerry, not yet Curly). The plot is considerably more contrived, the romance is pallid and the film ends with a Colorado blizzard/school bus wreck set piece that is quite different from anything that occurs in IHON. Proposing Fugitive Lovers as a direct influence on the latter film is a stretch, in spite of the opinions of such venerable film writers as William K. Everson.

Clark Gable was cast when MGM studio head Louis B. Mayer, miffed by Gable’s salary demands, banished him to Poverty Row studio Columbia to teach him a lesson. Gable, at the time, was known mostly for his dangerously sexy villains (he shoved Norma Shearer around in A Free Soul) and his only slightly tamed heroes in films like Red Dust. Richard Maltby quotes Rene Jordan’s musings that Gable “had a power to give orgasms, even to a generation of women who weren’t too sure whether they were supposed to have them.” Capra said Gable arrived at the studio drunk, as a protest, giving Riskin the idea for his character’s introduction in the film. When Gable got back to MGM after the picture’s smashing success, he didn’t have to ask for a raise. 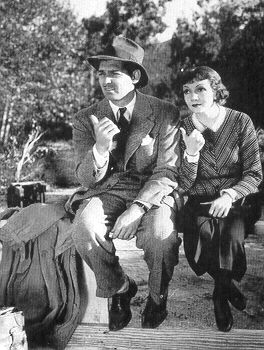 Capra was unable to get any of the actresses he wanted for the part of Ellie Andrews, partly because no self-respecting star would make a film with only two costumes (although one is perhaps the most exquisite wedding gown in movie history). He asked Myrna Loy, Miriam Hopkins, Margaret Sullivan, Constance Bennett, Bette Davis and Carole Lombard to play Ellie, and all turned him down. But, after Gable was signed, Capra had a sweeter deal for the next actress he asked, Claudette Colbert. She was at the bottom of the leading lady totem pole at Paramount, beneath Marlene Dietrich, Mae West, Hopkins and Lombard. She correctly surmised that her own studio would pay more attention to her in a film opposite Gable. She agreed, if Columbia would pay her twice her usual salary, and she could finish in four weeks, so she could still meet friends for a Christmas ski holiday. “We slammed through the film, clowning, laughing, ad-libbing,” Capra wrote. Afterwards, Colbert confessed, “I just finished the worst picture in the world.” 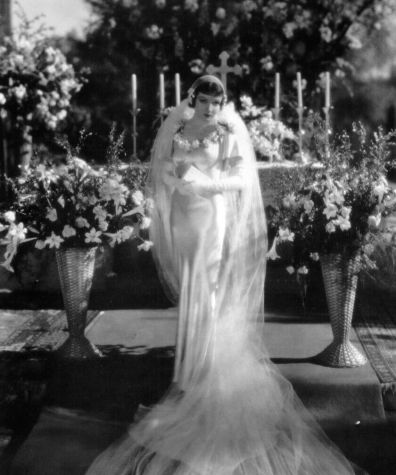 Gable came to admire Capra, and decided that making the picture could be fun, after all. Capra told a Silver Screen interviewer in 1942, that he had a habit “of interrupting a sequence directly in its middle and changing it about so that the actors are compelled to improvise lines and situations. ‘Their very faltering, their hesitancy in expressing themselves make for realism, for a lifelike effect that is familiar at once to the audience.'” Colbert maintained her skepticism, however, and worried about the scene where everyone on the bus sings “The Man on the Flying Trapeze.” How could they know all the words? she wondered. Yet, this became one of the film’s signature scenes. In a Photoplay interview, Capra highlights this scene as an example of how he thrived under the freedom at Columbia. “I had heard a record of ‘The Man on the Flying Trapeze.’ I thought, maybe some hillbillies would be fun, playing it on their guitars! Well, when they started singing, the tune and the words were so catchy that everyone on the set began singing it, too. Another idea. Why not let the whole bus join in? And that’s what finally evolved. If I had been working at a larger studio, limiting my actions, I would have had to leave the set and get an okay to hire the hillbillies; run get another ok to hire each extra hillbilly, each extra singer, until I probably would have given up on the idea rather than tangle myself up in a maze of red tape. At Columbia I can follow up any inspiration of the moment while the picture is being made without asking anyone except myself–and the opinions of the people who are working with me.”

Capra thought scenes that didn’t further the plot were as important as the ones that did. Joseph McBride quotes a Capra interview with Richard Glazer. “Sometimes your story has to stop and you let the audience just look at your people. You want the audience to like them. The characters have no great worries for the moment–they like each other’s company and that’s it. The less guarded they are, the more silly it is, the better. These scenes are quite important to a film. When the audience rests and they look at the people, they begin to smile. They begin to love the characters, and then they’ll be worried about what happens to them. If the audience doesn’t like your people, they won’t laugh at them, and they won’t cry with them.”

Cinematographer Joseph Walker said, “Aside from Capra, most of us were unhappy about doing this one.” Riskin was hoping for Mutiny on the Bounty but it was far beyond Columbia’s Poverty Row budget. IHON would be shot in 36 days for $325,000. Its “Big Five” Oscar sweep, (Picture, Actor, Actress, Director, Screenplay) has been duplicated only by One Flew Over the Cuckoo’s Nest in 1975 and The Silence of the Lambs in 1991 (and what a comment on changing movie tastes that little tidbit is!). Capra almost didn’t go on stage to receive his 1934 Best Director Oscar. The year before, convinced he would win for Lady for a Day, when the announcer said, “Come and get it, Frank,” Capra was halfway to the podium before he realized the prize was being awarded to Frank Lloyd, winning for a WWI-era prestige picture called Cavalcade. IHON probably was the best picture of 1934, but it should be noted that Capra was the President of the Academy of Motion Picture Arts and Sciences at the time. He lobbied for the office, because when Louis B. Mayer was President, his studio, MGM, won the lion’s share (as it were) of the Oscars. The Oscars remain, as always, hugely political. 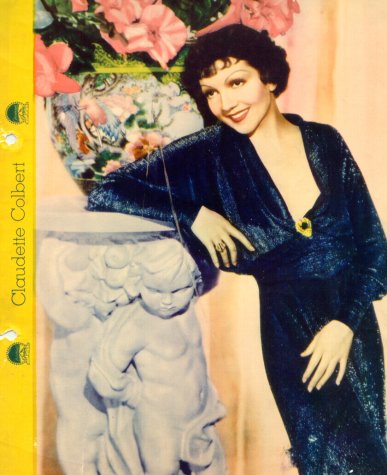 Capra used his privileged and plebian characters to mix up audience expectations about both social class and gender to remake the American couple. As Elizabeth Kendall points out in The Runaway Bride, Peter is “broke, he’s out of a job, he can’t even run fast enough to catch the guy who stole Ellie’s suitcase. He’s a surprisingly frank embodiment of the ineffectuality of the American male in the face of the Depression. He can only do one thing well: take care of someone who’s lost.” Ellie, shockingly, dumps a perfectly good meal on the floor in the beginning, and disrupts a lavish wedding at the end, both wasteful gestures that would make Depression era audiences blanche. And, of course, Peter may disdain her wealth, but he does marry it.

Leland Pogue writes (and many write similar sentiments) of IHON, “Its public reception and its continuing reputation as a film masterpiece attest to (its) perfection. Repeated viewings of the film only reinforce the impression that not a single millimeter of film was wasted. Everything serves Capra’s comic purpose and as a comedy, IHON is an achievement of the highest order.” Gerald Wealds writes, “Although I know that Peter would win Ellie the first time I saw IHON, and although I have seen the film many times, I still feel a sense of joy when she cuts and runs in the wedding scene, making an escape from the wrong husband to the right one.” Ellie is rushing away from the frivolities of the 1920s towards a new 1930s democracy—running away from the tyranny of the upper classes towards egalitarianism as well as sexual fulfillment. We all fly across the lawn after her. 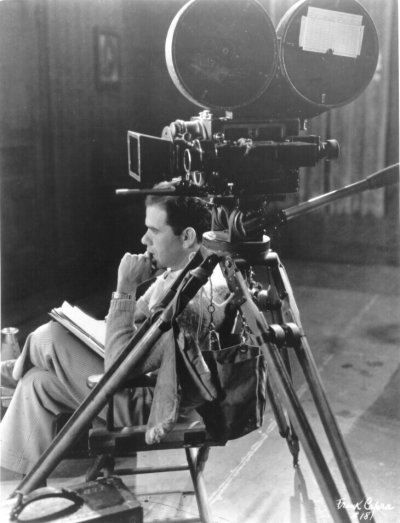 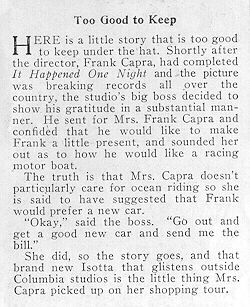 There was certainly no lack of on-set publicity for the film: 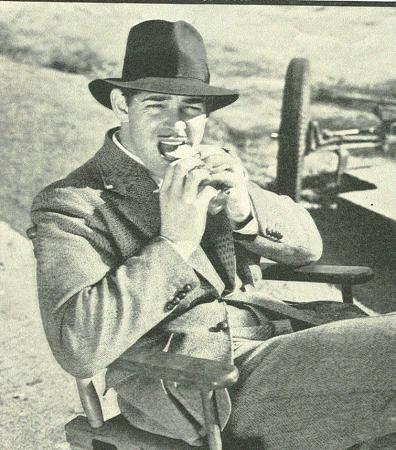 It’s a long time between lunch and dinner. So Clark Gable thinks. Consequently Mr. Gable was a regular customer at the hot dog wagon that stationed itself near the set of It Happened One Night. Clark co-stars with Claudette Colbert. 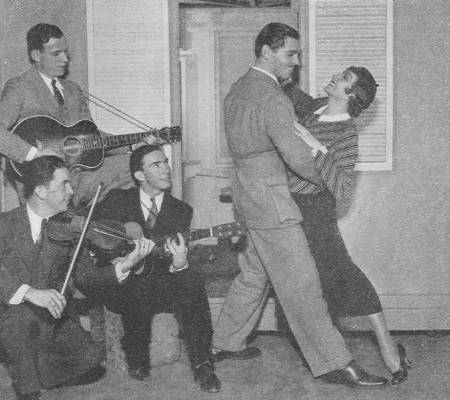 Between shots on the “Night Bus” set–Clark Gable and Claudette Colbert dancing away the “waiting time.” —From the February, 1934 Silver Screen Magazine.

Sources include: The Runaway Bride, by Elizabeth Kendall; Joseph McBride’s Frank Capra: the Catastrophe of Success; Six Screenplays by Robert Riskin, edited and introduced by Patrick McGilligan; Richard Maltby’s essay on IHON in Frank Capra: Authorship and the Studio System; Gerald Wealds’s Canned Goods as Caviar; William K. Everson’s Hollywood Bedlam; The Crazy Mirror by Raymond Durgnat; Romantic Comedy in Hollywood by James Harvey; Screwball by Ed Sikov; December, 1934, Capra profile by Kirtley Baskette in Photoplay, reprinted in The Talkies, edited by Richard Griffith; January, 1942 article in Silver Screen on Frank Capra by Paul Benedict, Leah Rosen’s article on Columbia Pictures in the NYTimes and The Cinema of Frank Capra by Leland Poague. This last book, written in 1975, must have been one of the first film history books to treat cinema as a serious academic subject, not as nostalgia. Photo of Frank Capra from Jerry Ohlinger’s movie materials store, Gable and Colbert from the December, 1960 Films in Review article on Clark Gable by Carlos Clarens, Ellie Andrews’ wedding gown from Grand Illusions by Richard Lawton, color photo of Colbert was part of a set of movie star profiles from the mid-1930s… Moviediva’s collection on set photo from March, 1934 Photoplay.